It’s a massive week for AUDNZD

The Australian dollar is drifting lower in Asia after a softer than expected reading of private sector Chinese manufacturing PMI for July. Caixin’s Manufacturing PMI dropped to a two-year low at 47.8, well below expectations, July’s flash reading and the 50-mark which separates expansion and contraction. This paints a much bleaker picture of China’s manufacturing sector than the official figures which were released on Saturday; official manufacturing PMI was 50, down from 50.2 in June. The different readings of manufacturing sentiment can be explained by a stronger performance from larger STOs, which dominate the official numbers, while Caixin’s report is a better indication of activity in smaller privately owned manufacturers.

The AUD wasn’t initially hit very hard by the private sector reading of the manufacturing sector, with AUDUSD only briefly dipping below 0.7300 in the immediate aftermath of the data, but the commodity currency began to sink under the weight of negative sentiment later in the session. AUDUSD is back below 0.7300 at the time of writing as the pair prepares for a massive data-filled week in Australia and the US, ahead of all-important NFP figures out of the US on Friday.

This is matched by an equally big week for AUDNZD, with a slew of economic numbers from both Australia and NZ in coming days (see below). This comes as AUDNZD grapples with resistance around 1.1100 and support around 1.1050; it seems the pair is stuck between another rock and another hard place. A break of 1.1100 could reignite a recent rally, while a push below 1.1050 would open up critical support around 1.1000. 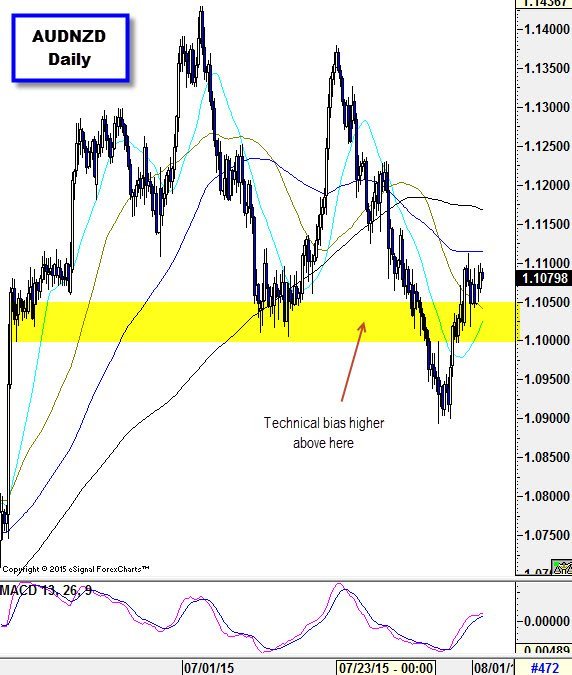 This data may take a backseat to the results of a monetary policy meeting at the RBA later in the day, but they may still have an impact on the aussie; the strength of trade exposed sectors and the pace of activity at the ground level in Australia are important ingredients in the RBA’s policy mix. Retail sales are expected to have jumped a somewhat encouraging 0.4% and the deficit is expected to widen slightly to 2.95bn in June.

The RBA is expected to conserve its ammo

The Reserve Bank of Australia (RBA) is widely expected to leave the official cash rate at 2.00% this time around. However, there’re some in the market who think the RBA needs to cut the official cash rate further in coming months. Overnight index swap rates suggest that at the time of writing there’s around a 20% chance that the RBA will loosen monetary policy this time around, which is fairly low. Instead, it’ll be worth watching the Stevens’ accompanying statement for possible hints that the bank’s softening its bearish stance on the exchange rate or subtly changing its implicit dovish bias.

This index has become a very important release for the kiwi, as it provides an uncut look at the behaviour of dairy prices, which are NZ’s biggest export, at the ground level. Prices have dropped at the last nine auctions, including a massive 10.7% fall at the last auction in mid-July, thus another weak result could hit the kiwi hard, while a push into positive territory may calm some kiwi bears.

This release will be closely watched after Q1’s fairly dismal employment report, which added to the RBNZ’s case for looser monetary policy. This time around the market is expecting the unemployment rate to increase to 5.9% from 5.8%, with employment and wages both anticipated to increase 0.5% q/q. With the market already looking for a somewhat downbeat report, an even worse than expected set of numbers could really hurt the kiwi as it would increase the chance for further policy loosening from the RBNZ.

Australia’s labour market is being closely watched by the RBA as it’s a vulnerable part of the Australian economy. So far, slowing immigration has helped keep the unemployment rate at around 6.0%, backed-up by encouraging increases in full-time employment. This time around we’re expecting the unemployment rate to rise to 6.1%, underpinned by only a 10K increase in jobs and a stable participation rate of 64.8%. There a few things to watch with this report: whether jobs lost/added are part-time or full-time, with growth in the latter seen as the healthier option; whether or not people are entering or leaving the workforce, judged by the jobs total and the participation rate.

The RBA only releases this statement once a quarter and they are very in-depth, which means they provide a clearer picture of the RBA’s outlook for interest rates and the economy than its post-meeting statements. The market may be looking for clarification of the RBA’s implicit dovish bias, while also keeping an eye on prospects for growth and inflation.