The Reserve Bank of Australia has inspired a rally in the Aussie by changing a phrase in its latest policy statement. The RBA merely stated the obvious by noting that the Australian dollar is adjusting to significant declines in key commodity prices. As my colleague Chris Tedder reported, this is a far cry from the bank’s comments at its last policy meeting which suggested that further depreciation in the Aussie seemed both likely and necessary. The RBA also delivered a more upbeat outlook on the Australian economy as it kept the cash rate unchanged at 2%. However it did note that monetary policy needs to remain accommodative.

While the RBA’s decision not to verbally assault the currency may not have a long lasting impact on the AUD/USD because of the growing speculation about a US Federal Reserve rate hike, the Aussie may nonetheless perform better against some of the weaker currencies such as the EUR, JPY and NZD.

Indeed, the AUD/JPY may have already formed a triple bottom reversal pattern around 89.35 which could see rates rally strongly over the coming weeks. This level had already offered strong support back in February and then did twice again in July. Although the AUD/JPY has yet to make a higher high in order to confirm the reversal, the bulls will be happy to see price holding comfortably above the psychologically-import level of 90.00 and also the break of resistance at 91.00. The latter may now turn into support upon a potential re-test.

The next resistance to watch on the AUD/JPY is around the 92.25-92.45 area. The prior consolidative range high meets the 38.2% Fibonacci retracement level there. It is likely that a cluster of stop buy orders are sitting above this area, which could now get triggered, leading to a continuation of the upward move towards the next bullish targets.

Beyond the aforementioned range is the 50-day moving average at 93.35 then a bearish trend line around 94.00, followed by the 61.8% Fibonacci level at 94.20 and then the 200-day average at 94.85. These levels will need to be watched carefully as the overall trend is still technically bearish. If price eventually breaks above these levels then a more significant rally could be underway.

Meanwhile a closing break back below the 91.00 support would call into question the above outlook. Indeed, this potentially bullish outlook will become completely invalid if the AUD/JPY goes on to break decisively below 89.35. 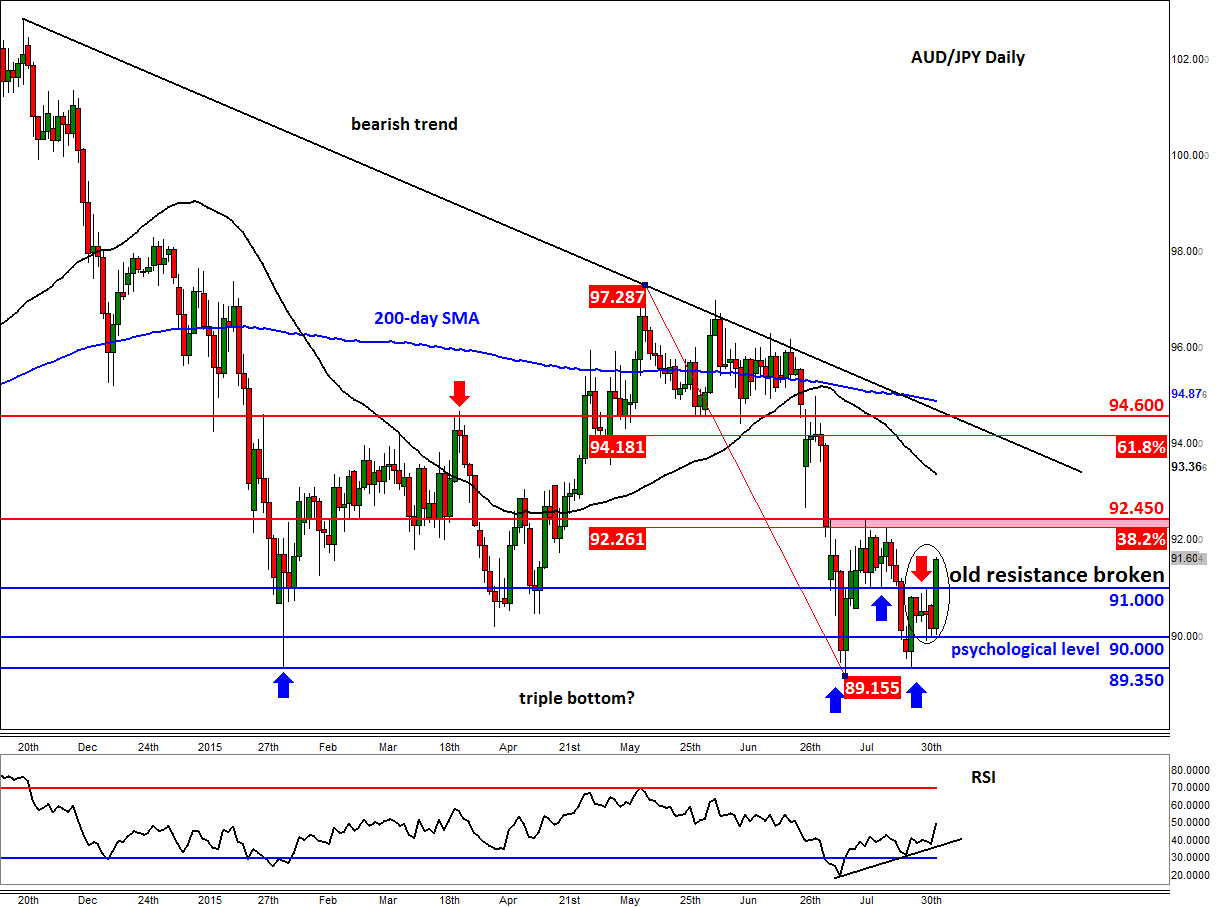