As my colleagues Chris Tedder and Fawad Razaqzada noted earlier today (see “RBA Removes its Dovish Bias and the Ceiling on AUD” and “AUD/JPY: Triple Bottom Reversal?” for more), the Australian dollar has surged across the board as the Reserve Bank of Australia took a definitive shift to a more neutral outlook last night. Combined with better-than-expected reports on retail sales (0.7% m/m vs. 0.5% expected) and the country’s trade balance (-2.93B in June vs. -3.06B expected), today’s reports served as the fundamental impetus for a rapid short squeeze rally.

As of writing, AUDUSD has rallied all the way up to the .7400 level, up more than 120 pips on the day and there are some legitimate technical reasons to suggest the pair has put in at least a near-term bottom in the mid-.7200s. For one, both the MACD and RSI indicators formed significant bullish divergences (a quadruple bullish divergence in the case of the RSI) over the last several weeks, showing that the downside momentum was fading well before today’s big rally. Meanwhile, the pair is also showing a big Bullish Marubozu Candle* in progress so far today; this candlestick pattern signals strong buying pressure that often carries over into the next few days.

Now that AUDUSD has broken out of its near-term bearish channel (see chart below), the short squeeze may have further to run. To the topside, the next levels to watch are the minor previous highs at .7450 and .7500, followed by major previous-support-turned-resistance at .7550. If we reach that critical long-term level at .7550, bears are likely to come out of the woodwork to defend it, but until then, the path of least resistance remains to the topside.

Traders should also keep a wary eye on key data out of the US (ADP Employment, ISM Non-Manufacturing PMI, and of course, NFP on Friday) and Australia (Employment data on Thursday and the RBA’s quarterly monetary policy statement on Friday) over the next few days. 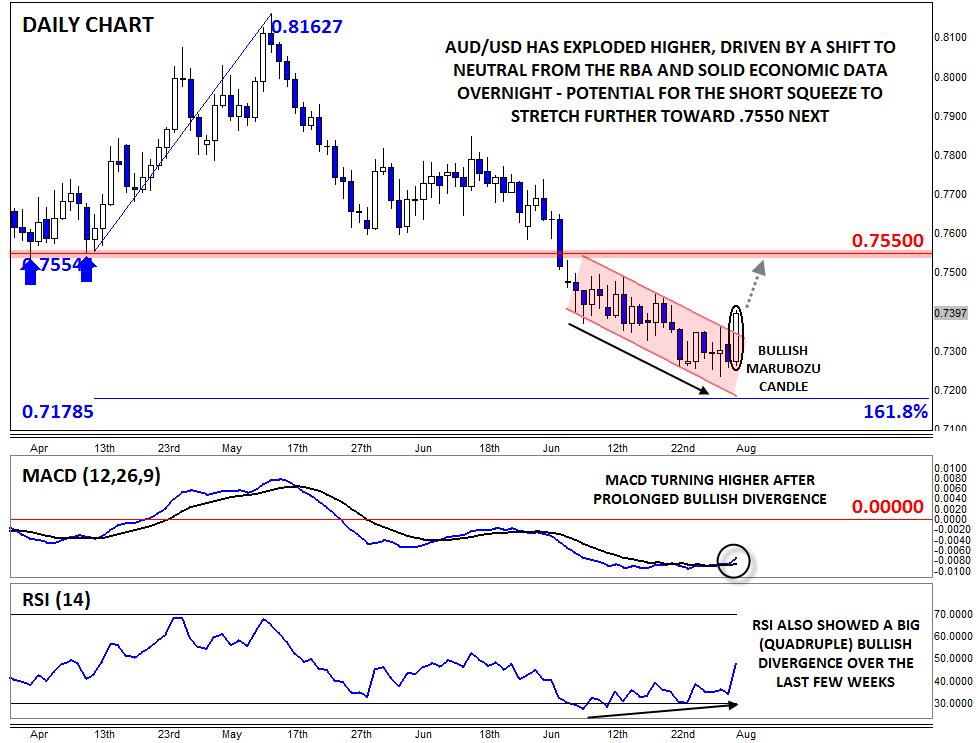