Cracks appearing in US stock markets

Following the global financial crisis, US stock markets have been marching higher year after year since they bottomed out in March 2009. But this year the markets have struggled for direction and that’s still the case today despite what has been a decent quarterly earnings season so far. Thus the winning streak could be over come December 31st.  There are various reasons why this could happen, not least the fact that the end of the Fed’s ultra-easy policy stance is nigh. If this week’s US macro numbers surprise to the upside then calls for a September rate hike may increase. This could see the dollar and stocks go in the opposite direction.

Sometimes a counter-to-anticipated response may be more significant than the news itself. Grexit risks, for example, have been reduced; the Chinese stock market turmoil looks to be under some control after the authorities there introduced several measures to curb volatility; US earnings have been decent; interest rates worldwide remain historically low and the global economy is not doing too bad either. Yet despite all this, the US markets are refusing to push noticeably higher. This behaviour of price action suggests that the market is clearly fatigued and may be in need of a vicious, but healthy, correction.

Already, energy and metal prices have been falling which continue to weigh heavily on commodity-linked stocks. The wider stock markets could follow suit soon. In fact, Apple is already breaking lower, with the stock taking out its 200-day average after breaking an important support around $120 yesterday. Given the heavy weighting of Apple on the major US indices, the iPhone maker could drag the markets much lower from these elevated levels if the selling continues in the stock. Indeed, up until now it has been stocks such as Apple that have been supporting the markets. The number of stocks participating in most recent rallies has been falling. The so-called market breadth is looking dire with the percentage of stocks trading above their 50- or 200-day moving averages continually declining. The indices are thus being supported by a decreasing number of market leaders. Soon, not even these stocks may be able to support the markets.

Like Apple (figure 1), the Dow (figure 2) is holding below its 200-day moving at the moment. The index is potentially in the process of making a rounded top reversal pattern after the recent rallies to fresh all-time highs were not accompanied by fresh buying frenzy, which itself is indicative of a tired trend. Meanwhile the S&P 500 (see the weekly chart in Figure 3) has already reached the 161.8% Fibonacci extension level of the entire 2007-9 bear trend at 2138. This represents an exhaustion area for the market, so a sharp pullback from here in the coming weeks should not be a major surprise. That being said though, the S&P is still holding inside a long-term bullish channel. Therefore as things stand the trend is still technically bullish. But the cracks are now becoming more visible. 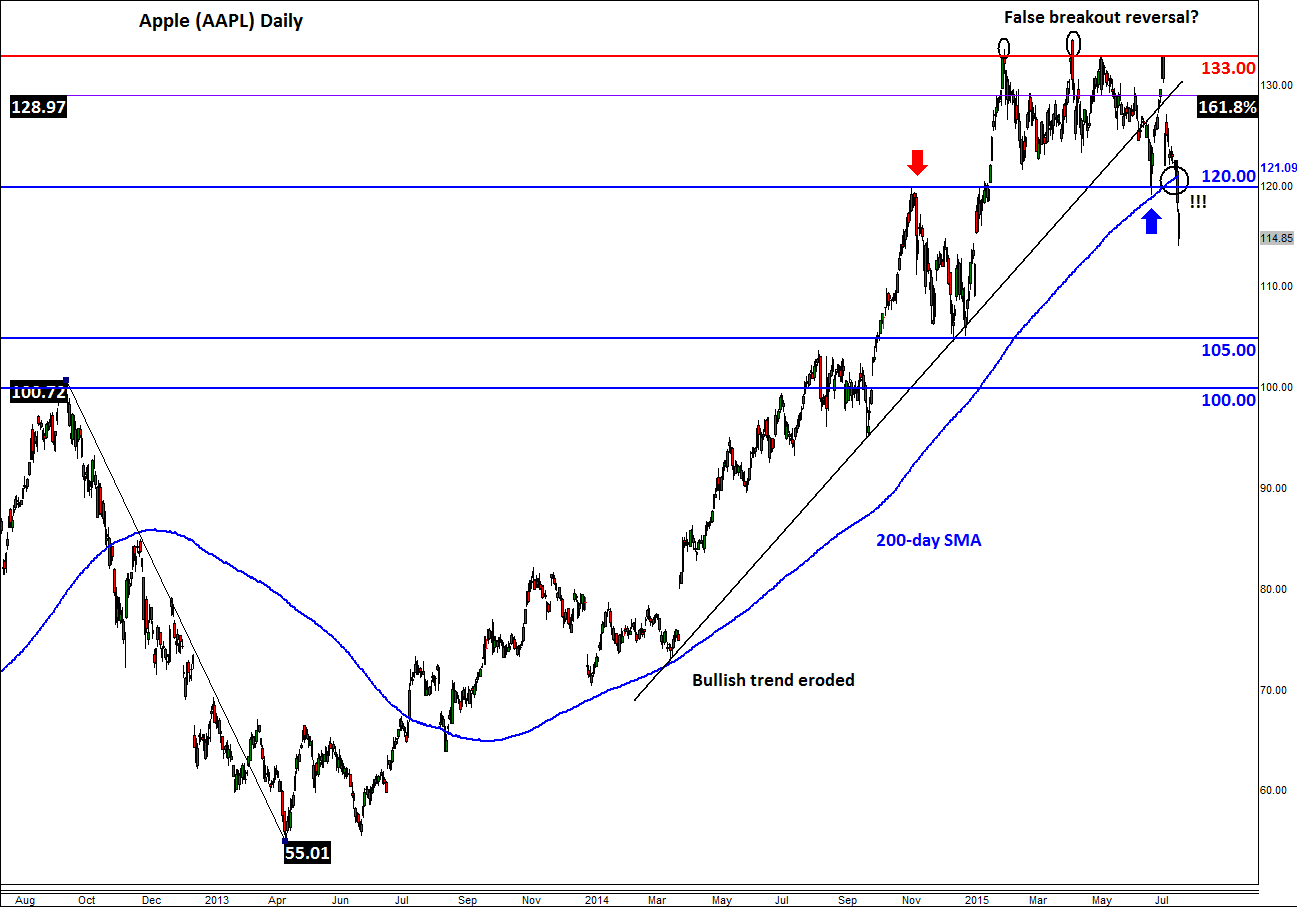 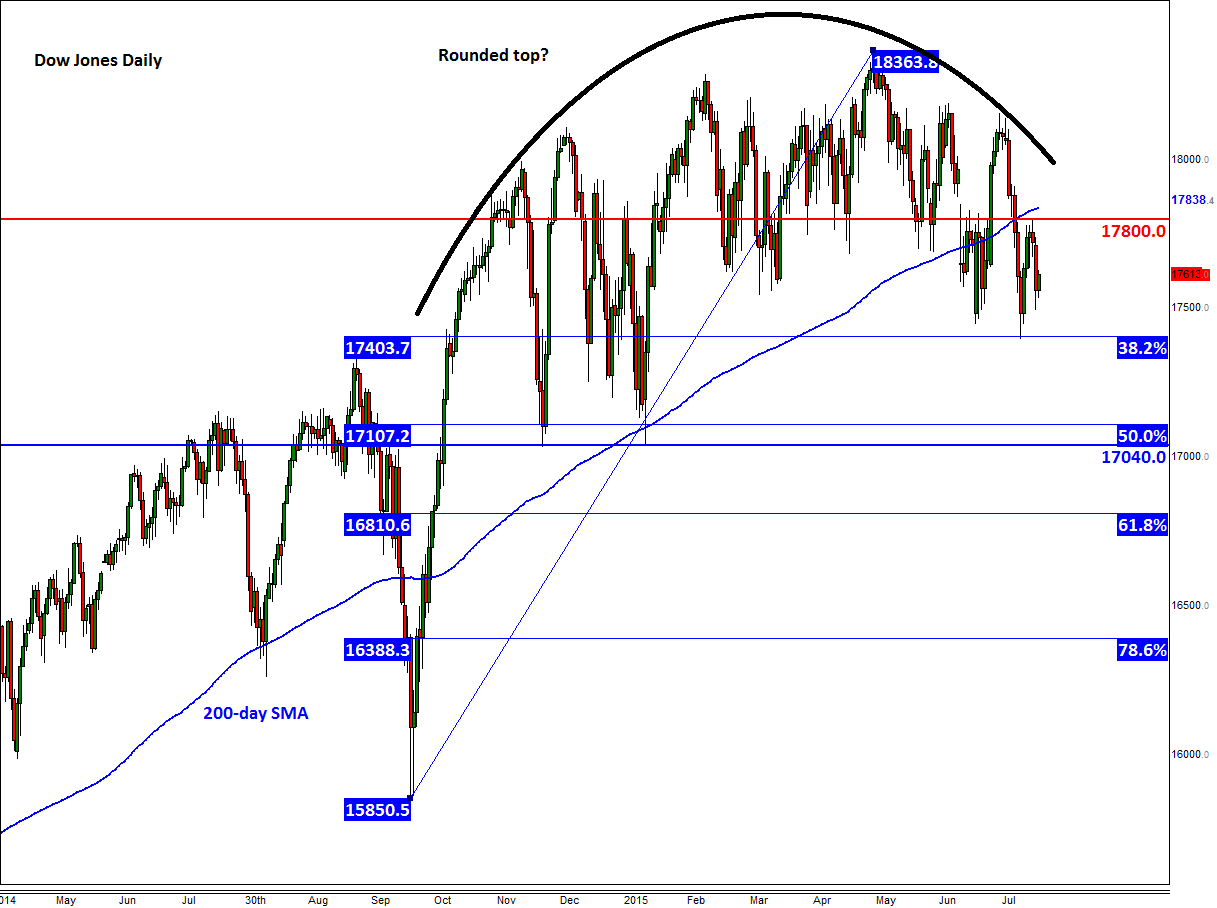 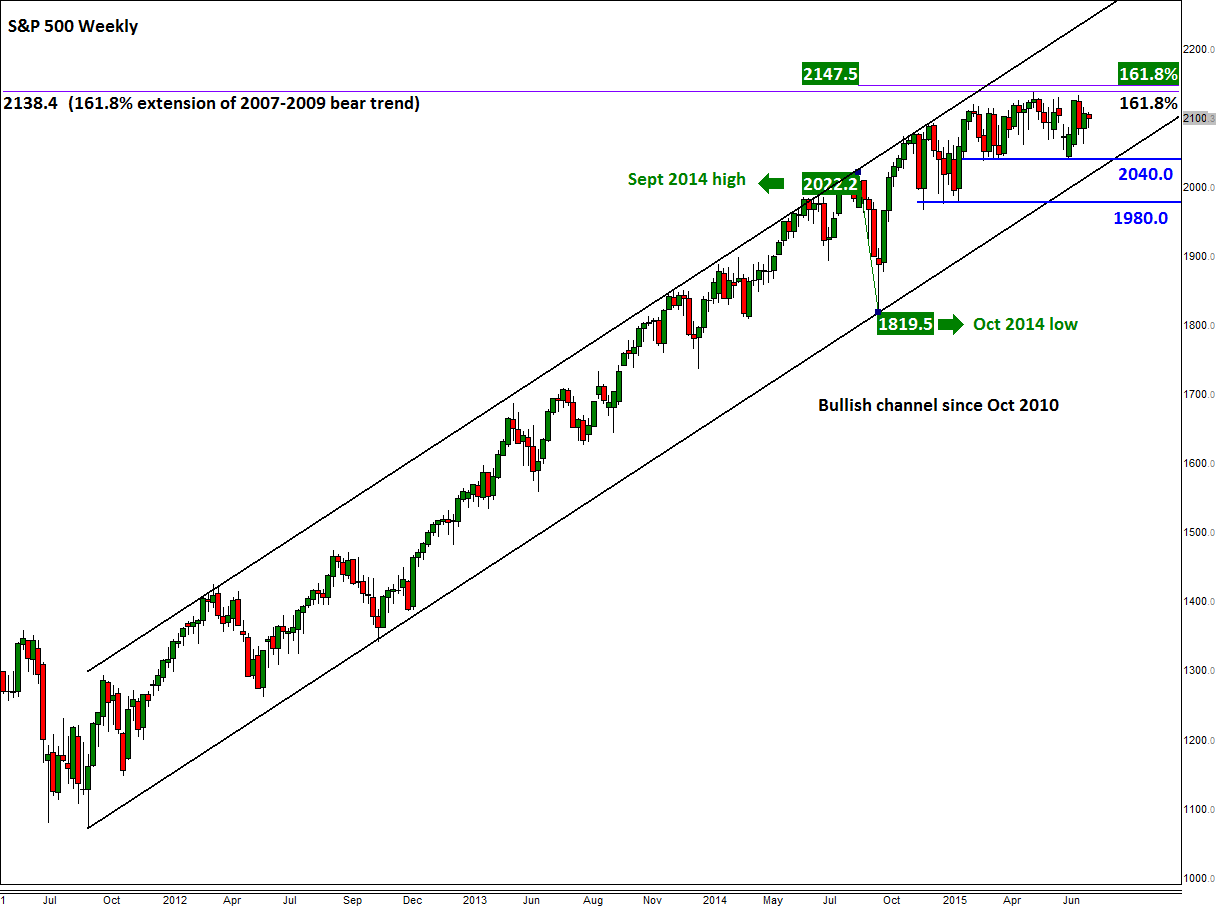