While much of Europe’s economy is chugging along at the same slow but steady pace, traders were abruptly reminded of Greece’s economic tragedy yesterday. Most of yesterday’s Manufacturing PMI figures out of individual Eurozone countries were in-line with expectations in the low- to mid-50s (including in Germany, France, and Italy) but the figure out of Greece was so abysmal that many analysts thought it was due to a calculation error. The widely-watched Manufacturing survey showed just a 18.8 reading in July, showing that economic activity in the Mediterranean nation ground to a complete halt amidst last month’s capital controls and Grexit fears. Adding insult to injury, the Athens stock market exchange reopened on the same day, promptly collapsing a full 16% on its first day back in the spotlight.

It’s now clear that the latest chapter in the Greek debt drama has caused far more damage than many had expected, with some analysts now suggesting that Greek GDP by 2% in Q2 alone, with Q3 looking arguably worse after last month’s imposition of capital controls. Longer term, the rapid deterioration in Greece’s economy suggests that the latest bailout’s expectation of a primary budget surplus (that is, a budget surplus not considering Greece’s onerous interest payments on debt) in the next few years will be all but impossible. While the “eye of the market” has shifted from Greece’s troubled finances for the last few weeks, it may be drawn back to the country sooner than policymakers had initially hoped.

It’s been a quiet start to what should be a very busy week for the world’s most widely-traded currency pair. EURUSD ticked lower yesterday and after a brief bounce earlier today, has edged down to test the 1.0900 handle as of writing. From a broader perspective, the unit remains capped by its 50-day MA at 1.1100 and floored by previous support in the 1.0800-20 zone. With this week’s full-to-the-brim US economic calendar, traders will be watching for a break of one of these key levels to signal a continuation in the same direction.

Given the longer-term downtrend and clear monetary policy divergence in favor of the greenback, a break of support at 1.0800 seems more likely, but conservative traders may prefer to wait for a breakout before trading. 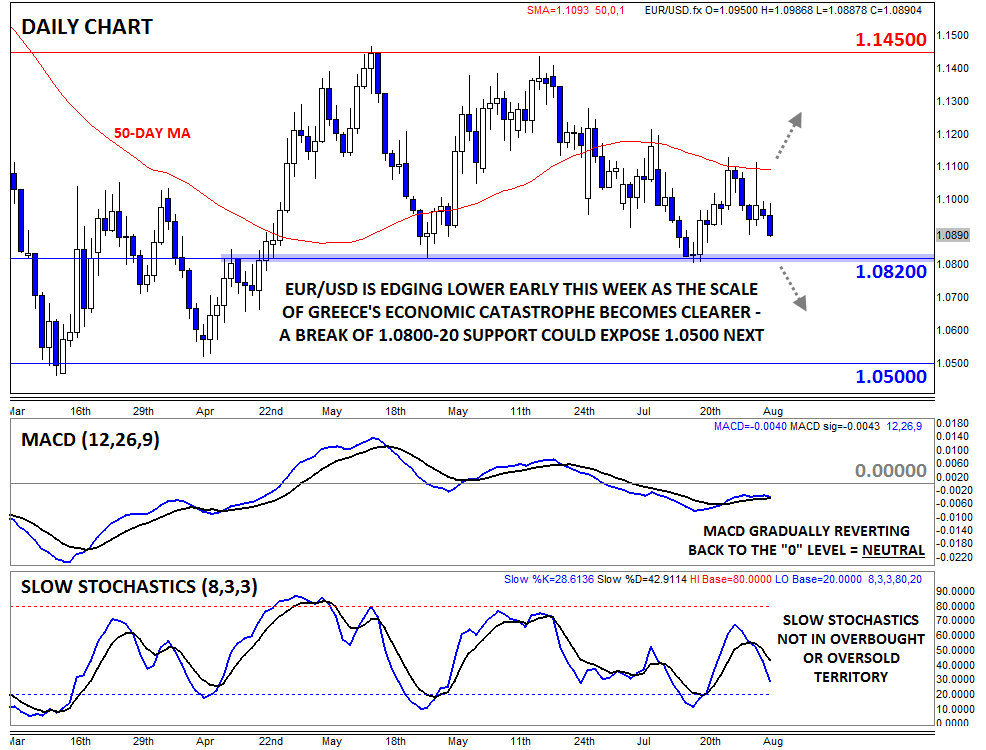