USDJPY: Bulls Revving Up, but Break above 124.50 Needed

The classic starting command for the Indianapolis 500 will jumpstart the heartbeat of any true racing fan, and global traders are revving up for a similarly fast-paced race over the latter half of this week.

Today’s economic data kicked off with the release of the ADP employment report, one of the better leading indicators for Friday’s marquee NFP report. The massive payroll provider determined that the US economy created 185k jobs last month, below the 216k expected by economists and traders. The June report was also revised down slightly, from 237k to 229k.

At the margin, this release increases the risk of a disappointing NFP report on Friday, but readers should be cautious about reading too much into this noisy monthly data point. The ISM Non-Manufacturing PMI report later this morning (10:00 ET) should provide a more holistic view of the US economy’s performance in July. Beyond the US data releases, traders will also get their first look at Australia’s July jobs report tonight, a raft of new information from the Bank of England tomorrow that has been dubbed “Super Thursday,” monetary policy statements from both Australia and Japan in Friday’s Asian session, as well as a top-tier jobs report out of Canada on Friday. Clearly, it’s time to strap the seatbelt on tight.

The market reaction to the slight miss in ADP has been limited thus far. The greenback initially dipped against its major rivals, but has already recovered those minor losses as we go to press.

Taking a step back, USDJPY may be forming one of the clearest patterns in the FX market from a longer-term perspective. Over the last two months, the pair has carved out a clear inverted Head-and-Shoulders pattern with a neckline at 124.50. In this case, a confirmed break above the “Kuroda Line” at 124.50 would open the door for a strong rally back toward the 13-year highs at 125.80 as soon as next week.

Of course, a disappointing NFP report on Friday could still take the wind out of the bulls’ sails; a break below the right shoulder at 123.00 would invalidate this bullish pattern and point to more short-term weakness to come. 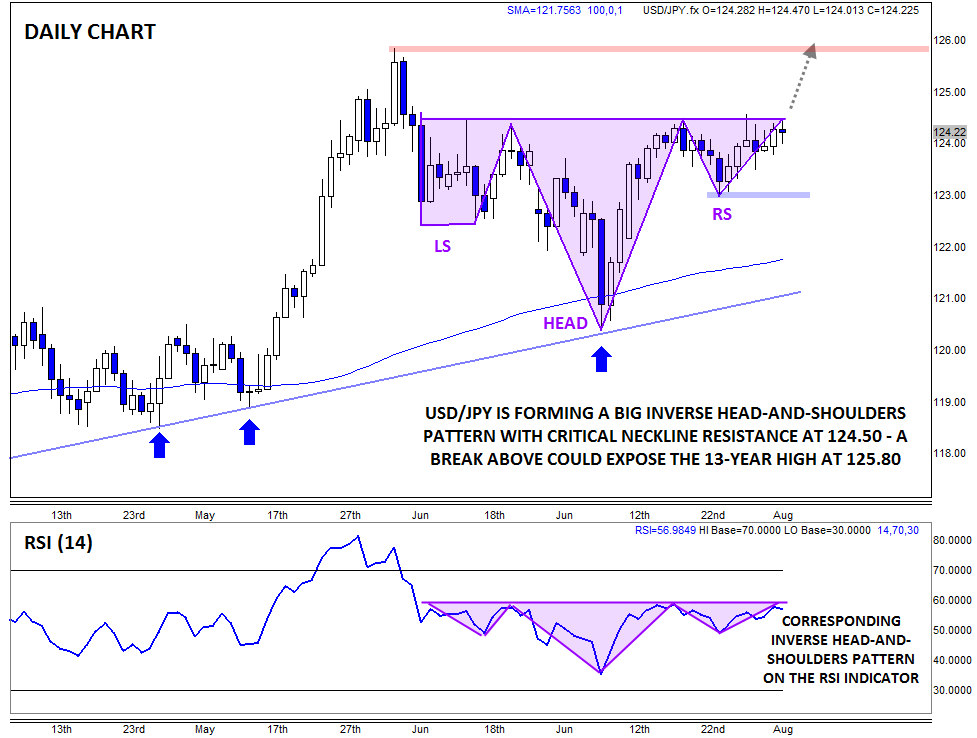