Crude oil prices managed to end Tuesday’s session in the positive territory after some strong selling pressure in the first two trading days of the month.  The price recovery was in part driven by profit-taking ahead of the usual weekly oil reports from the American Petroleum Institute (API) on Tuesday evening and the Energy Information Admiration (EIA) today.  As the API had reported a sharper-than-expected drop in crude and gasoline stocks last night, WTI was able to gain further ground this morning. Oil speculators were thus expecting to see a drawdown in the official numbers. Indeed, the EIA reported a relatively sharp 4.4 million barrel decline in oil stocks. Unsurprisingly, WTI initially shot higher in response to this seemingly bullish oil report, before falling back a good one dollar to trade in the negative territory.

WTI’s failure to respond more favourably to the crude inventories report doesn’t surprise me in this current weak environment. The 4.4 million barrel drawdown in crude inventories was never going to be a game changer anyway – it merely represents a drop in the ocean – and some of the decline was already priced in following the API’s report from last night.  Also, bear in mind that gasoline stocks actually rose while US oil production increased further.  It is worth pointing out that sometimes the failure of price to respond as expected can actually be more important than the news itself. Oil “should” have rallied but it didn’t; this is a very bearish outcome in my view as it suggests that the bears are still in the driving seat.

US oil’s behaviour post the crude stockpiles report makes even more sense when you look at the charts. As the daily chart shows, below, WTI turned lower from where it “should” have i.e. $46.65 – the previous support level. In downward trending markets, once a support level breaks down it usually turns into resistance in the future. This common behaviour of price action is what we have seen again today. Also, the dollar’s kickback rally in response to a very good ISM services PMI report is another reason why oil and some other buck-denominated commodities like gold have turned lower.

Going forward, for as long as WTI remains below $46.65 on a daily closing basis, the short-term bias would remain bearish.  As such, the path of least resistance remains to the downside. Oil may now go on to head towards the supports shown on the chart, including $44.90 (a 161.8% Fibonacci extension level), $44.20 and the March low at $42.00. Alternatively, a closing break above $46.65 would violate the near-term down trend and in this scenario oil could easily head back towards the prior resistance levels of $49.50 or even $50.00 before making its next move. 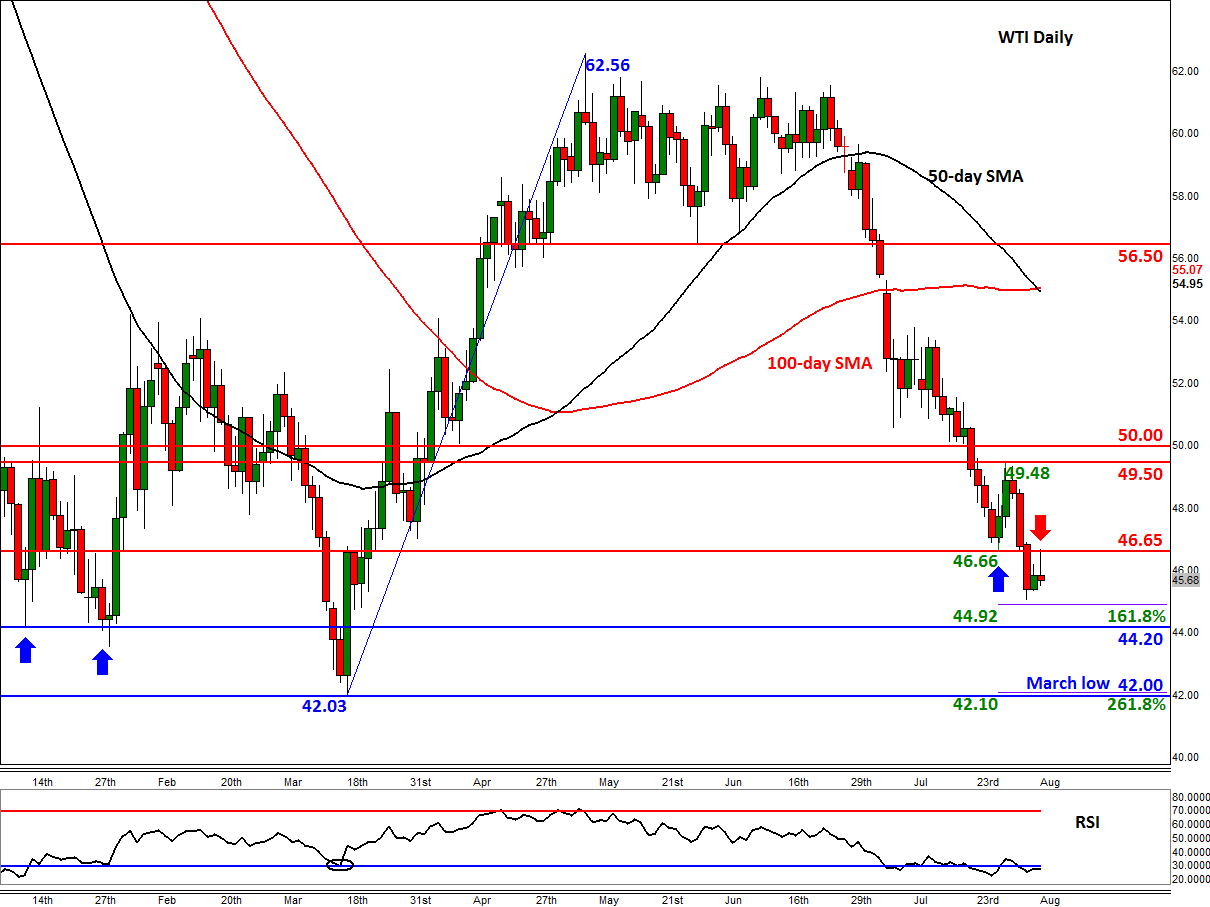