Gold is down for the sixth consecutive trading day and unless it stages an unexpectedly sharp rally later this afternoon, the metal is also going to snap a two-week winning streak. Just last Thursday it looked like the metal had finally woken up from its slumber when it momentarily traded above $1155 and a bearish trend line that has been in place since the start of this year. Then, both the dollar and equity markets were looking pretty weak, with the latter falling on Chinese concerns and the former on disappointment that the Federal Reserve delayed hiking rates in September. Now, both the dollar and stock markets have firmed up, thereby reducing the appeal of gold. With Chinese markets on holiday, some market participants have undoubtedly been taking advantage of lower stock prices and the bearish sentiment to find good trading and investment opportunities in companies with sound fundamental backdrop, especially those that have been heavily oversold. The dollar meanwhile has risen due mainly to a fall in the EUR/USD currency pair on the back of some weaker Eurozone data and mixed-bag US numbers. With the Eurozone CPI falling back into the negative territory and oil and other commodity prices continuing to remain downbeat, inflationary pressures on this side of the pond are almost non-existent which bodes ill for gold.

As far as today is concerned, investors are sharpening their focus on the US jobs report, due at 13:30 BST (08:30 EDT), and depending on the outcome of the data we could see sharp moves in equity prices and the US dollar, and therefore gold. Along with the change in the headline nonfarm payrolls number and the unemployment rate, gold traders in particular will want to watch the Average Hourly Earnings component of the report closely, for this is a measure of inflation and has been ticking higher in recent times. It is expected to have increased by another 0.2% last month, which should alleviate some of the Fed’s concerns about inflation. Though a pickup in inflation should boost the appeal of gold in the long term, it will also likely support the dollar which could be bad news for the buck-denominated metal in the short term. A good set of numbers should be bad news for gold. But there is scope for disappointment and if the numbers fail to meet the expectations then gold could stage a decent recovery from these short-term oversold levels.

Taking everything into account though, the overall feeling is that in the current economic climate and market environment it is probably still not the right time for gold to shine. Indeed, the false break above the bearish trend line suggests the bears have grown in confidence and although prices are already down for six straight days, which means the potential for a bounce back is now high, further sharp losses could follow if the short-term bullish trend line around $1105/7 area now breaks. If it does, the bears may then aim for $1100 initially ahead of the August low at $1077 next. But over time, the precious metal could potentially drop all the way towards the Fibonacci levels shown on the chart. Meanwhile on the upside, the first level of resistance to watch is at $1120, which corresponds with the 50-day moving average. Thereafter is the bearish trend line, which needs to break decisively if we are to see a sharp rally in gold any time soon. 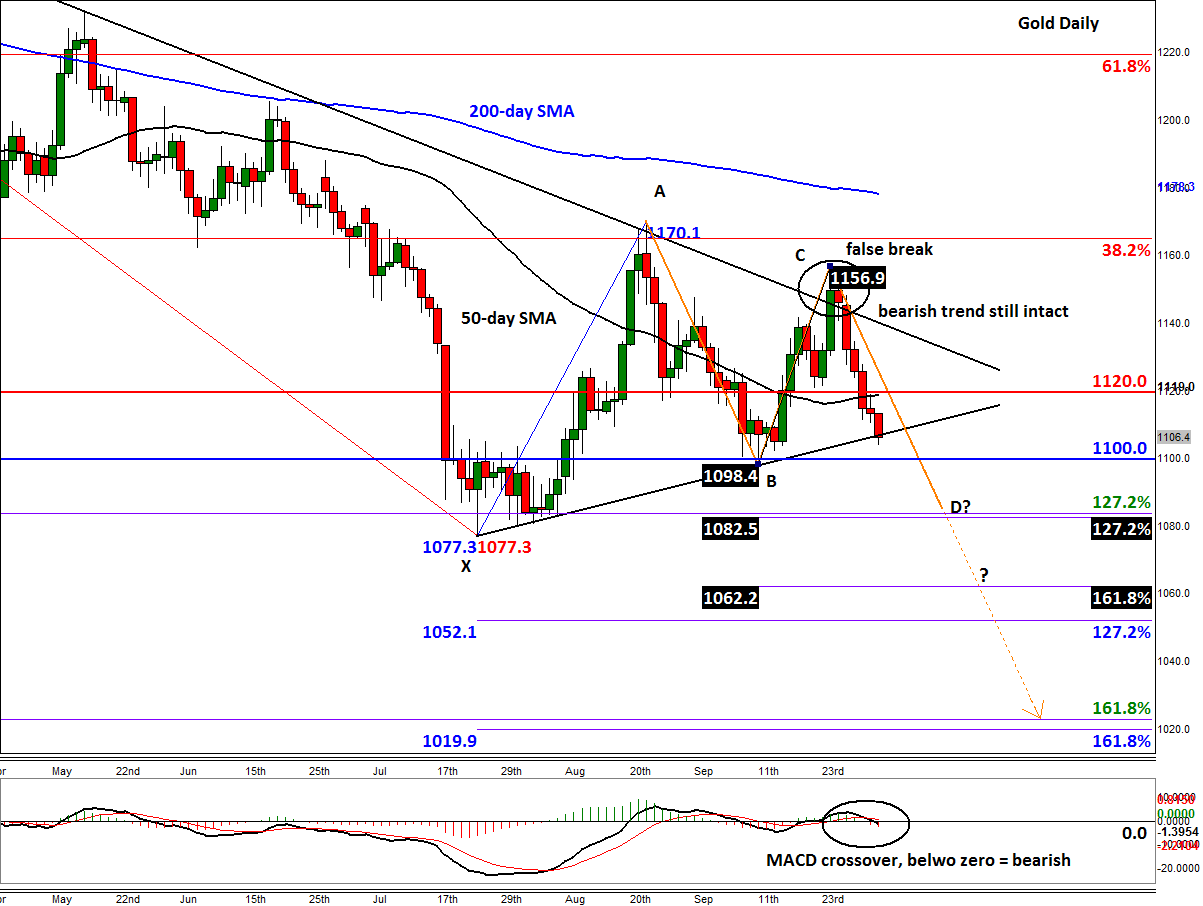