RBA Preview: is the bank going to reinstate its easing bias?

The Reserve Bank of Australia is under pressure to loosen monetary policy further due to the risks facing the Australian economy, although it’s unlikely to do so at its policy meeting today (announcement 0330GMT). While it’s true that parts of the economy are preforming well, the broader economy is exposed to falling commodity prices and worsening economic conditions in some of its main trading partners, especially China. This is outpacing an ongoing transition away from being so heavily reliant on resource and related sectors.

Ongoing concerns about the health of China’s all-important economy and emerging markets are fuelling fears about the outlook for the global economy. In fact, the poisoned atmosphere in the global marketplace has resulted in a widespread sell-off off risk assets and brought into question prior assumptions about growth, inflation and monetary policy in economies throughout the world. Even the Fed is likely questioning the need for tighter monetary policy in this kind of toxic environment.

In Australia, the economy is one of the most exposed in the developed world, largely because of its reliance on its resource demand. While non-resource based states are broadly performing well, a collapse in mining investment is dragging down overall growth, with the economy expanding a measly 0.2% in q/q (much less than the expected) last quarter. Only household and government spending kept the economy heading in the right direction in Q2.

There’s not much light on the horizon either, with growth expected to remain below trend for the foreseeable future. Businesses are cutting spending and there’s not enough life in non-mining parts of the economy to pick up the slack being left behind by diminishing mining investment, despite a softer exchange rate.

However, the RBA remains in neutral due to the aforementioned weakness in the aussie and a somewhat resilient labour market down under. The unemployment has remained around 6%, led by strong and consistent growth in full-time employment. Meanwhile, the aussie has fallen around 25% over the last couple of years, revitalising the services sector. This fuels the argument that the current accommodative level of monetary policy is enough to support the economy through its transition away from being wholly reliant on mining investment.

Despite the RBA’s position on the sidelines in the past couple of months, the deterioration of the global economy raises the stakes for the bank as it attempts to support the changing nature of the Australian economy. If the RBA looks more dovish than it has in the past due to the aforementioned concerns about global growth, it could keep the Australian dollar pinned down. AUDUSD is currently still flirting with 0.7000ish and looks like it’s waiting for long-term direction, thus a dovish RBA could help push the pair below 0.7000 and keep it there in the near-term. 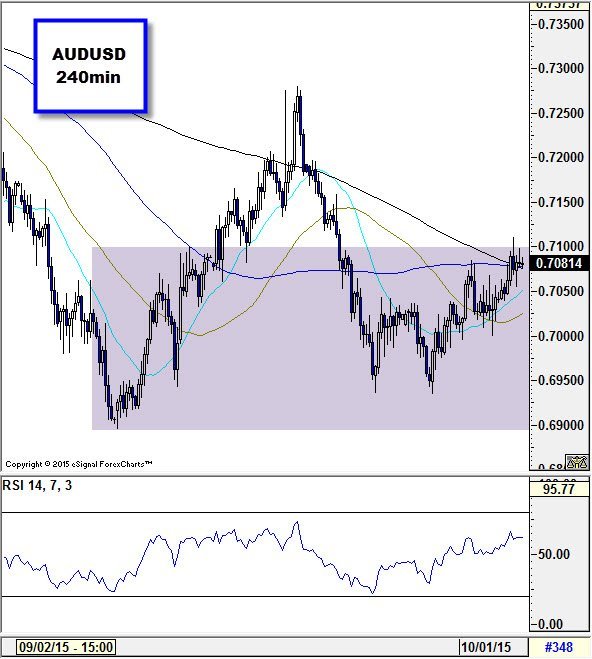