*** My colleague Matt Weller will be off on holiday for a couple of weeks, so I thought I should write the first paragraph of this report in his style which may (or may not) bring a smile to his face before he jets off!***

You see, the last kick-back rally that began at the end of August ended at around 4435/50 resistance on September 17, a level where we correctly predicted that the markets were turning lower from (see “US stocks: is this the turning point (lower)?” for more). As can be seen from the chart, below, this level marked the convergence of previous support and a bearish trend line with the 50-day moving average. This resistance area was located in between the key 61.8 and 78.6 per cent Fibonacci retracement levels of the downswing from the summer’s multi-year highs.  Interestingly, the corresponding drop from this 4435/50 resistance area ended when the index pulled back to 4050, a level which resides in between the 61.8 and 78.6 per cent Fibonacci retracement levels of the upswing from the August low. Yet even more remarkably, the index has today found resistance in between these same Fibonacci retracement levels of the most recent downswing. If history repeats itself and the index turns lower from here as it looks like it might then this interesting Fibonacci pattern would project a move down to somewhere between 4114-4163 (yes, these are the 61.8 and 78.6 per cent retracement levels of the most recent upswing to today’s high; not drawn on the chart in order to keep the charts looking tidy).

In addition to the abovementioned Fibonacci levels, the Nasdaq 100 is facing additional resistance from 4340 – a pivotal support and resistance level in the past – and the now downward-sloping 50-day moving average at 4342. The 50-day MA has now dropped below the 200 to create a so-called “death cross”. Many speculators see this crossover as a confirmation of the downward trend, implying that this group of market participants would therefore be looking to sell into the rallies rather than buy the dips. Are they selling today? Is the trend still bearish? Today’s close will need to be watched with attention.

If by the close of play we have a bearish looking candle on the daily chart, such as an inverted hammer, then this would strongly suggest that further losses could be on the way tomorrow and potentially beyond. Conversely, if the index rallies off these levels and closes decisively higher on the day then it may go on to take out the above-mentioned resistance levels. Indeed, it would be a rather bullish outcome if the Nasdaq 100 manages to break above the downward trend line in one of these sessions. 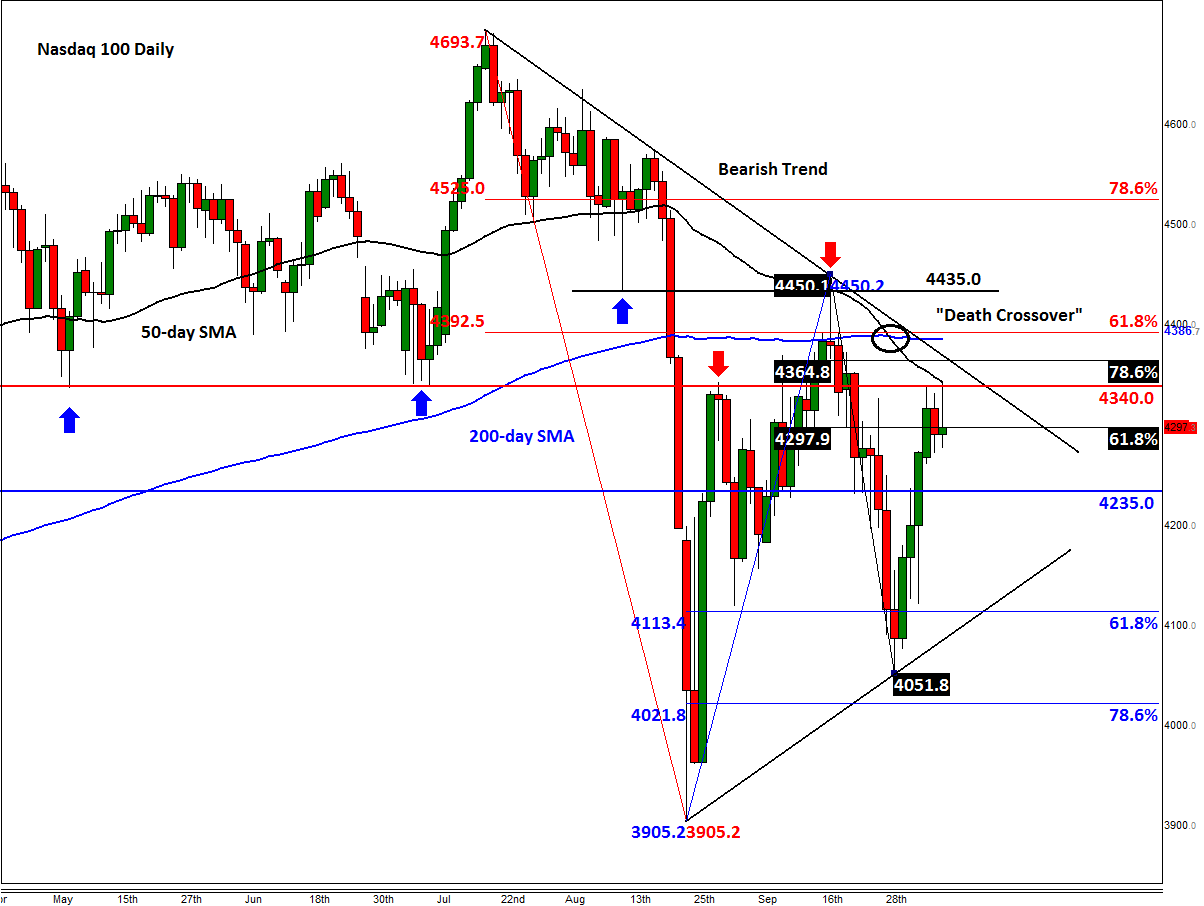