The AUD/USD has managed to recoup more than 450 pips after hitting a low of about 0.6905 in September. It has been supported by three main factors: (1) a general depreciation of the US dollar after the Federal Reserve refused to hike interest rates in September and the subsequent deterioration in US data; (2) the Reserve Bank of Australia dropping its verbal intervention on the Aussie and (3) a rally across some of the key commodity prices, such as copper and gold.

The Aussie’s rally is now either about to accelerate or come to an abrupt halt for we have some important economic data coming up over the next several days from not just Australia and the US but also from China – Australia’s largest trading partner:

Ahead of the above-mentioned macroeconomic numbers, the chart of the AUD/USD is looking rather constructive, if a little bit ‘overbought’ in the short-term as per the RSI. After all, it is up for the 10th consecutive day, no less. The Aussie began its rally after the bears failed to hold their ground below the psychologically-important level of 0.70 last month. More recently, it broke above its 50-day moving average and then key resistance at 0.7280, a level which was formerly support.

At the time of this writing, the AUD/USD was hovering just below 0.7385, the 38.2% Fibonacci retracement level of its most recent downswing from the high of 0.8160 achieved in May. This level comes in about 40-50 pips below a bearish trend line that goes back to September of last year. In other words, another key resistance area is now approaching (circled on the chart).

If the AUD/USD breaks through the noted resistance area then there is not much further resistance seen until 0.7530/80, an area which was formerly major support. Given the fact that the 200-day moving average, at 0.7600, resides just another 20 pips above this area, we would be very surprised if the AUD/USD does not at the very least hesitate here.

As things stand however, the short-term path of least resistance continues to remain to the upside for as long as price holds above the broken resistance level of 0.7280. A potential move back below here would potentially expose the 0.70 handle for another test. 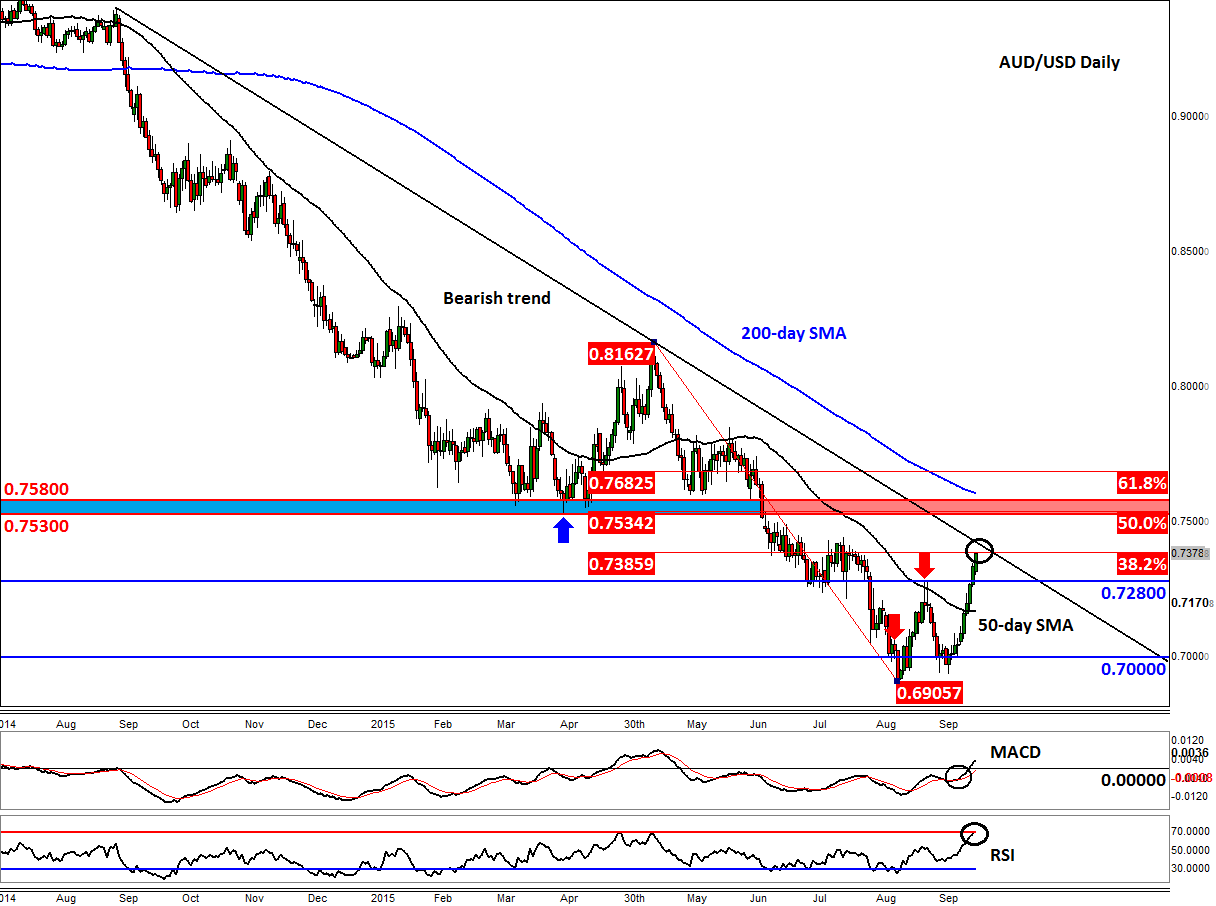