The pound has fallen across the board on disappointment the UK has slipped back into deflation for the second time this year, pushing investors’ expectations about an interest rate rise further out. The Office for National Statistics (ONS) reported that the Consumer Price Index (CPI) measure of inflation fell to -0.1 per cent in September compared to a year-earlier period. This surprised analysts who had expected the CPI to remain flat at 0 per cent. The ONS said clothing, footwear and fuel prices were among the reasons why the rate of inflation turned negative.

Other measures of inflation were also weaker, with the core CPI coming in at 1.0%, unchanged from the previous month but below the expected reading of 1.1%. The Producer Price Index (PPI) unexpectedly eased to 0.8% from 1.1% previously. And although the PPI input prices rose 0.6% month-over-month, somewhat more robustly than anticipated, this was absorbed by the manufacturers as output prices actually fell 0.1% on the month. Meanwhile the House Price Index (HPI) remained unchanged at an annualised rate of 5.2% in August, missing expectations for a rise to 5.5%.

Following the publication of the inflation figures, the pound fell sharply and it was at or near its lows against all major currencies at the time of this writing. The focus now turns to the UK jobs data tomorrow. The unemployment rate is seen steady at 5.5% in August while the claims for unemployment benefits are expected to have fallen by 2,300 applications in September.  Meanwhile the 3-month moving average of earnings is expected to show another increased to 3.1% in August compared to the same period a year ago, up from 2.9% the previous month. If earnings rise as expected then this would be further good news for the consumer as it will mean real wages are continuing to grow. It could also help to lift the pound.

As far as today is concerned, the pound has fallen even against the Swiss franc – where interest rates are negative, albeit the franc  does tend to do well when stocks fall (which is the case today) due to its perceived safe haven status. As can be seen from the chart, the GBP/CHF is now approaching key support at around 1.4600. As well as the low from August (point B) this is where the 200-day moving average comes into play. This particular moving average on this currency pair has acted as strong resistance and support in the past, and may provide a floor this time with the UK jobs data due in less than 24 hours now.

However with the bullish trend line already broken and with price “filling” the entire “SNB gap” (this is in reference to the void created by the Swiss National Bank’s decision to let its currency float freely against the euro back in January), there is an increased risk that the GBP/CHF may break through this level this time around. If it does, then it may drop sharply as there is no other key supports insight until the area around 1.4280 to 1.4365. This area marks the convergence of the point D of an AB=CD pattern with the 38.2% Fibonacci level of the up move from January’s base and the 161.8% extension of the BC leg.

If and when the GBP/CHF gets to the above-mentioned 1.4280-4365 support range, we would then expect it to bounce back and potentially test the, what would be, broken support and 200-day average around 1.4600 before deciding on its next move. 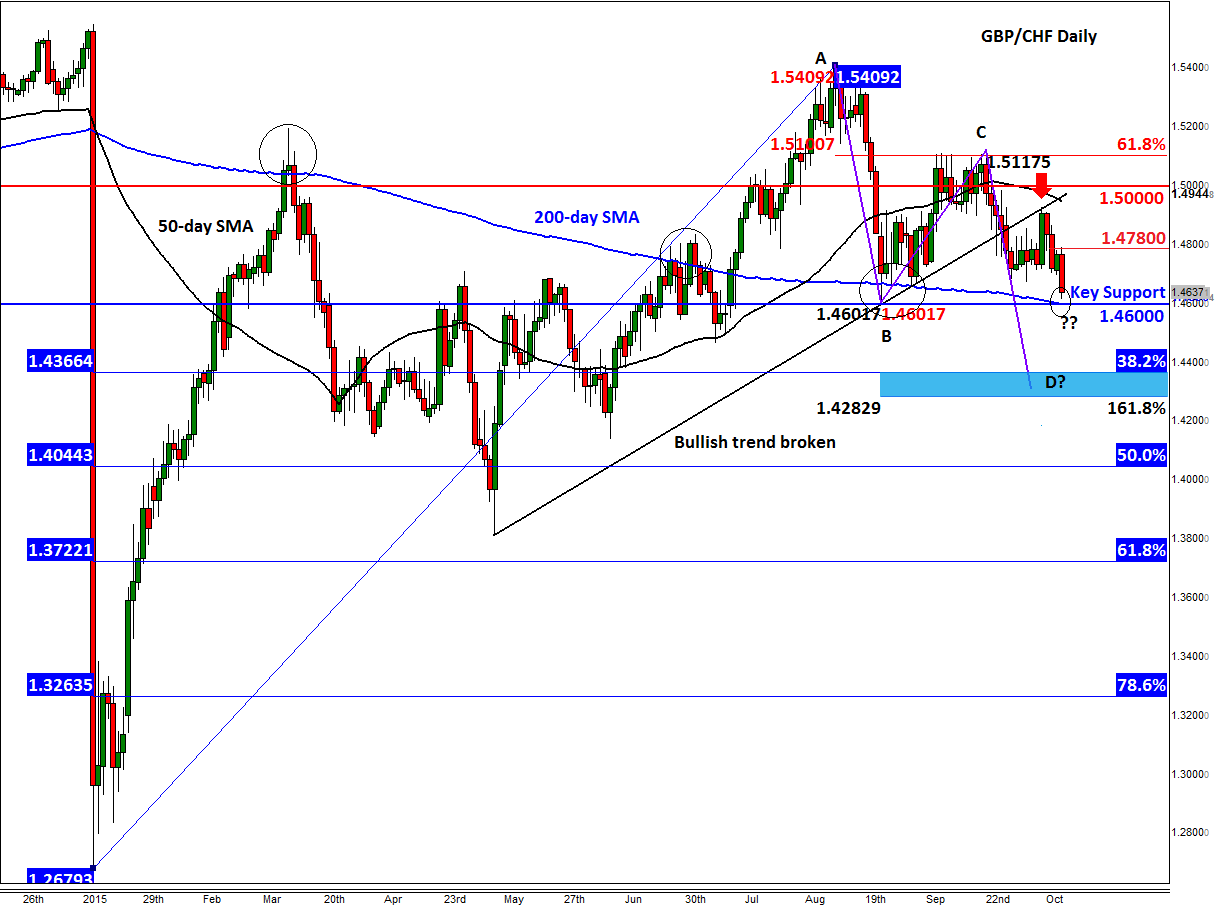