S&P 500 on shaky footing amid worries over earnings, economic growth

At the time of this writing, US stock markets have turned lower on the day after a mixed open, and the outlook remains uncertain due to concerns about corporate earnings and slowing growth in China and the US, the world’s largest economies. After the disappointing trade figures on Tuesday, inflation in China eased more than expected, with the Consumer Price Index printing 1.6% in September. This was below forecasts of a 1.8% rise and down sharply from August's 2% gain. The disappointment didn’t end there, as all of today’s US macro pointers disappointed expectations. Here, retail sales grew only by 0.1% month-over-month in September, while core sales fell 0.3%. On top of this, the Producer Price Index (PPI) dropped half a per cent. In addition, today’s earnings results have been far from convincing as Wells Fargo and Bank of America only narrowly beat the already-depressed earnings expectations, while JP Morgan missed the mark after the closing bell last night.

Earnings will be coming in thick and fast now, with Netflix being among the companies reporting after the closing bell tonight. Citigroup, Goldman Sachs and US Bancorp are among a big list of companies reporting their figures tomorrow. Thursday will also see the release of the monthly headline and core CPI estimates; the Empire State and Philly Fed manufacturing indices, and the usual weekly unemployment claims figures. Friday’s key macro data will include the UoM Consumer Sentiment, JOLTS Job Openings, Industrial Production and Capacity Utilization Rate. So, there will be plenty of earnings and data this week to hopefully provide clear direction for the dollar and stock markets.

Following today’s earlier disappointing data releases, the market’s reaction suggest a 2015 lift off is surely off the table now. Indeed, according to the Fed Fund Futures, the first rate increase could come in around March 2016 now. This is bad news for the dollar, but good for gold and probably neutral for stocks. However stocks are starting to look a little bit shaky from a technical standpoint once more, so we could see some further losses in the short-term at the very least. As well as the major indices looking shaky, the USD/JPY currency pair seems like it has made up its mind finally, and is heading lower after a long period of consolidation. Given their current positive correlation, if the downward move accelerates in the USD/JPY now then stocks could follow suit.

Indeed, the S&P 500 chart is beginning to look like it is turning lower once more. Yesterday, it formed a bearish engulfing candle around the technically-important area of 2021/2. As can be seen from the chart, this level corresponds with the 61.8% Fibonacci retracement level of the downswing from the all-time high. In addition, this level was previously resistance, meaning that we may have a double top pattern in the making. Meanwhile, the slow stochastics has turned lower from the overbought territory, though it has not created a bearish divergence (i.e. a lower high) which means the signal from this momentum indictor is a weak one. Nevertheless, if the S&P breaks decisively below the key support at 1995 now then we may see the return of the seller en masse. The next level to watch would be the 50-day SMA at 1984 followed by prior support at 1970. Thereafter is just thin air until the bullish trend line (see the chart). This bearish technical outlook would become invalid upon a potential rally beyond 2021/2.

Meanwhile the weekly chart of the Dow shows an even scarier technical picture in that the long-term bullish trend line that was taken out just a couple of months ago is now turning into resistance. 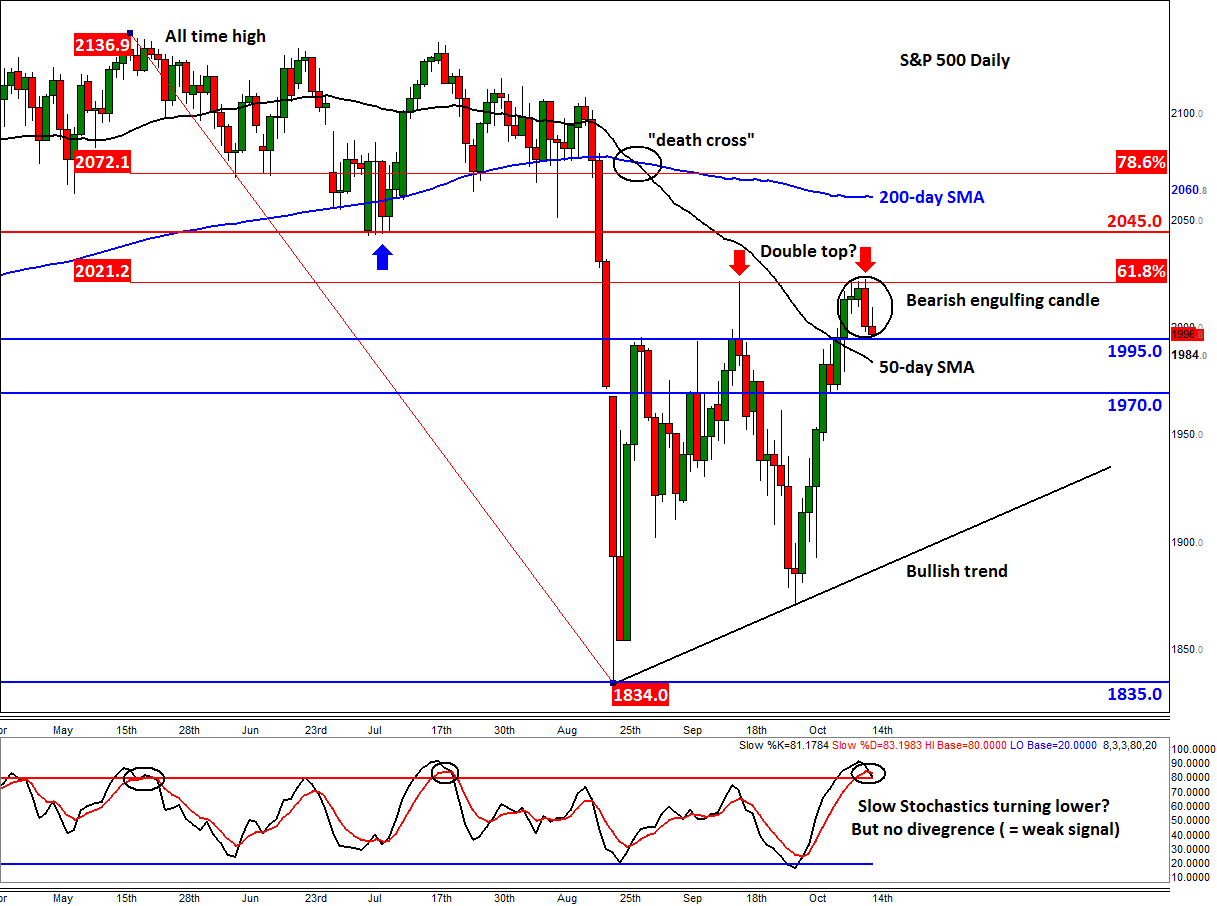 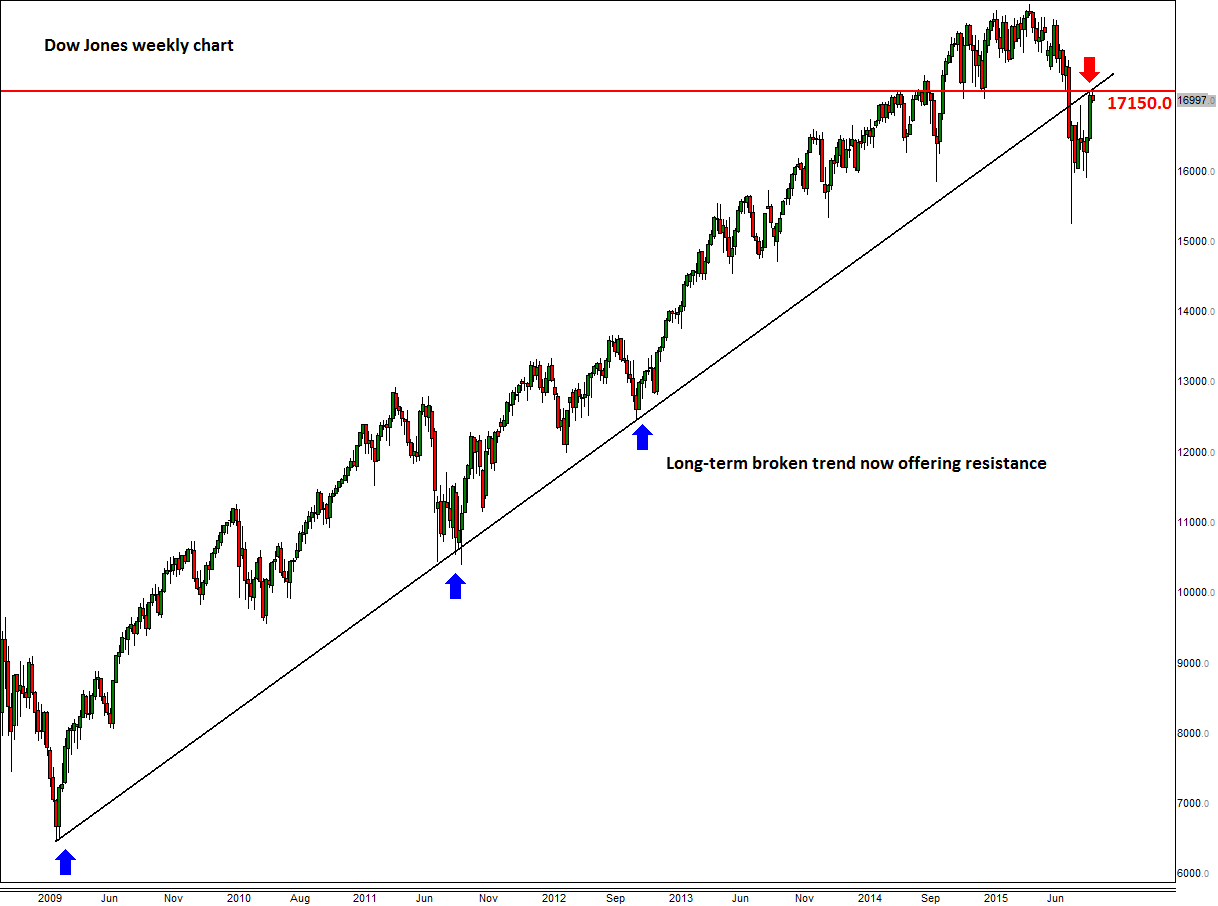