ECB Preview: Will Draghi be dovish enough for EUR/JPY?

That probably seems like an unusual way to begin an article about European monetary policy and EUR/JPY, but bear with me.

Whenever we visit Walter, he is so overjoyed to have someone to converse with that he’ll eagerly ask for updates about the groundhogs in our yard, our new toaster, and other mundane happenings in our lives. While these day-to-day happenings are hardly interesting even to us, he gobbles them up as if they’re the most fascinating developments in the world.

In some ways, traders may be a bit like Walt this week. With only minimal market-moving data on the calendar, traders have keyed in on tomorrow’s European Central Bank meeting like Walter circles the date of our visits weeks in advance. Unfortunately, there’s a big risk that the meeting will turn out to be as unexciting as our new toaster.

The ECB is widely expected to leave monetary policy unchanged tomorrow, with no changes to interest rates or its €1.1T quantitative easing program. Economic data has certainly taken a turn for the worse since the central bank last palavered in early September; most notably, annualized inflation fell back below the zero level last month, while the most recent figures from China, a major trading partner, have been anything but reassuring. That said, the central bank typically prefers to act at meetings where new economic forecasts are released, so it will likely hold off on making any changes until its December meeting.

As ever though, traders will be reading between the lines of the monetary policy statement and ECB President Draghi’s highly-anticipated press conference. At this point, the market is seemingly anticipating that Draghi will pave the road for a potential expansion of the ECB’s QE program in December, perhaps by stating economic risks are tilted to the downside and that the size, duration, or composition of the QE program will be adjusted if needed.

While it is certainly possible that Draghi and company will surprise traders by making a change to monetary policy tomorrow, we think it’s more likely that he fails to meet the market’s dovish expectations. In that case, we could see a short-term rally in the euro, with EUR/USD potentially making another run at last week’s high near 1.1500.

No doubt many traders will be focusing on the world’s most widely traded currency pair, but EUR/JPY could be even more interesting around the meeting. EUR/JPY has been trapped in a symmetrical triangle pattern over the last seven weeks and could be coiled for a big breakout. Much like we discussed with AUD/USD yesterday, this pattern suggests a sustained move if and when one of the trend lines is broken (as always, traders can use the corresponding pattern in the RSI indicator as a possible leading or confirming indicator of a breakout in the exchange rate itself).

If we do see a topside breakout above 137.00, the unit may see a continuation toward 139.00 heading into next week. On the other hand, an extremely dovish press conference (or outright expansion of QE) could take EUR/JPY through the bottom of the pattern down to previous support at 133.00 or lower. Finally, a roughly as-expected statement and press conference could lead to more consolidation in the triangle pattern as EUR/JPY traders turn their attention toward next week’s BOJ meeting; after all, sometimes a toaster is just a toaster. 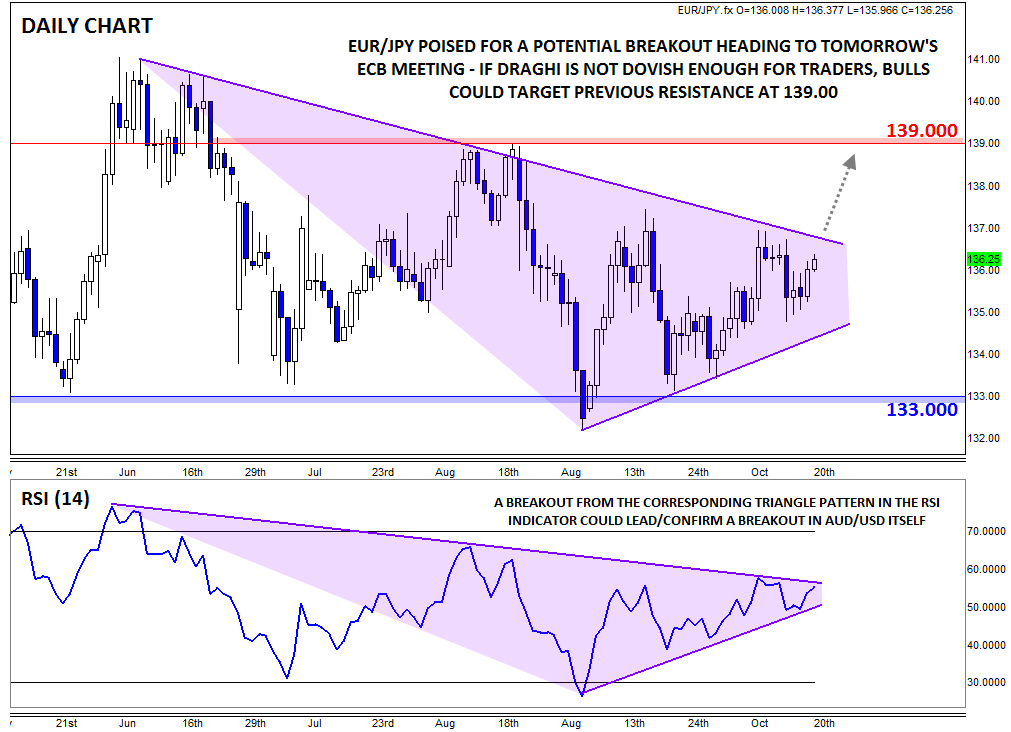