Draghi’s dovish comments from earlier today have led to out-and-out rout in the euro, with the single currency falling over 200 pips against the US dollar and even further against previously beaten-down currencies like the New Zealand dollar. With the prospect of a further easing from one of the world’s most important central banks, you would expect to see strength in commodities like oil, gold and other metals, but the accompanying dollar strength appears to be overwhelming this effect.

Despite a modicum of weakness today, gold’s technical outlook remains optimistic in the near-term. After peaking near 1190 last week, gold has nudged its way back down to 1165 as of writing. The shallow, controlled pullback after the big rally of the previous days has created a clear bullish flag pattern. It’s worth noting that, despite its name, this pattern is only seen as a bullish sign if we see a breakout above the top of the flag (currently near 1180).

That said, the secondary indicators suggest that we could see a bullish breakout sooner rather than later. The MACD continues to trend higher above its signal line and the “0” level, showing bullish momentum despite the recent dip. Meanwhile, the RSI indicator is in an uptrend of its own and has pulled back from overbought territory, potentially clearing the way for another leg higher.

Looking ahead, a break above the top of the flag at 1180 could open the door for a move up to 1200 next, and the measured move target of the pattern actually comes up closer to the 1250 level. Bulls would do well to temper their enthusiasm for now though, as a failure to break out of the bullish flag pattern could lead to a deeper retracement toward the 100-day MA in the 1140 zone. 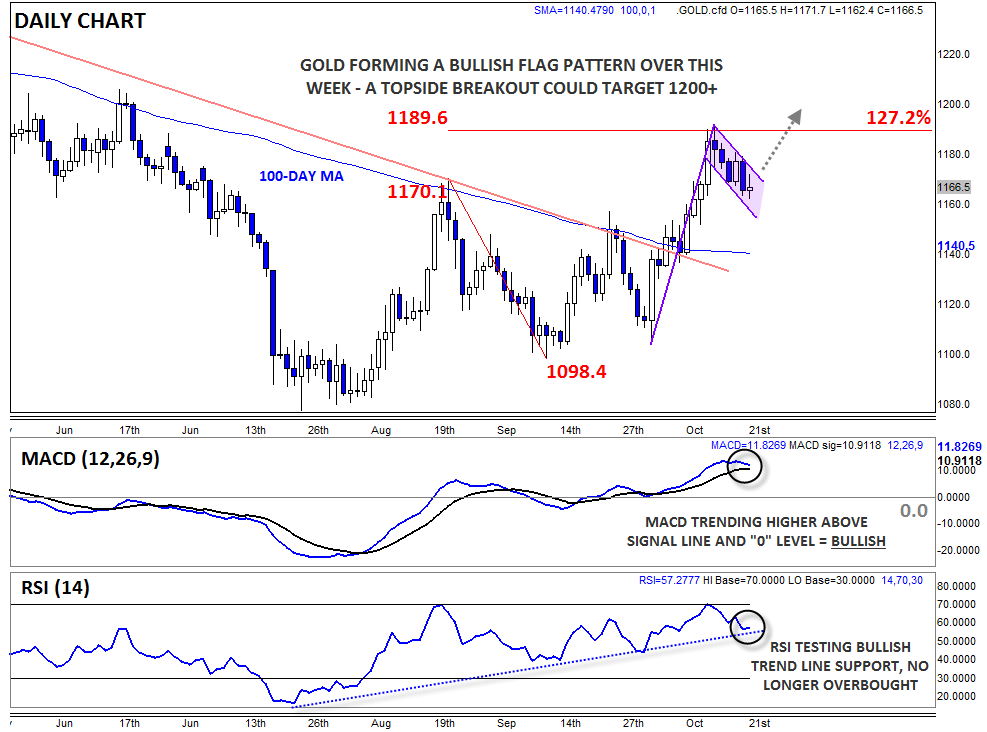