Late last week, China wrapped up the “Fifth Plenary Session of the 18th Central Committee of the Communist Party of China.” In case you don’t follow politics closely, this mouthful of a meeting just means that all the leading members of China’s Communist Party came together to discuss social, economic, and environmental policy over the next five years.

The attention-grabbing headline to come from this gathering was the news that the country would be relaxing its one-child policy: effective immediately, all married couples are now allowed to have two children. In practice though, this reform will have only a minimal impact, as any parents who were single children themselves (most of them) were already allowed to have two children. While the decision does signal that Chinese leadership is taking action to address the country’s demographic issues, the actual impact on the workforce obviously won’t be felt for another two decades when those new children grow up.

Beyond the decision to relax the one-child policy, Chinese leaders also decided to broaden the country’s “old age insurance” program, take steps to foster business innovation, move toward a “cap-and-trade” system for carbon emissions, and broadly continue to facilitate the transition from a manufacturing-led economy to a more consumer-driven one.

Speaking of manufacturing, the latest reading on Chinese industrial activity came out mixed over the weekend. The official government Manufacturing PMI reading came out at 49.8, showing essentially flat manufacturing activity in October, while the “third-party” Caixin Manufacturing PMI figure came out worse (as is its wont) at 48.3, indicating a modest decline. While these readings were by no means strong, they each improved over last month’s troughs, suggesting the worst of China’s economic slowdown may be behind us.

This is usually where we’d insert our standard disclaimer that China’s currency is not free-floating, so technical analysis tends to be less effective, but the country also decided to shift its exchange rate policy to a more market-determined rate in August, so those concerns are fading. Looking at the chart, USD/CNH predictably spiked in the wake of that decision (showing weakness in China’s yuan), but since then, USD/CNH has actually been trending clearly lower for nearly three months.

Traders were encouraged by the results of China’s 5th plenum, taking the pair down from 6.40 toward 6.35 as of writing, and in our view, the pair could continue to grind lower in the days and weeks to come. To the downside, the next level to watch will be the 78.6% Fibonacci retracement at 6.30; if that level gives way, USD/CNH may retrace the rest of the “exchange rate reform rally” back toward 6.20. At this point, only a break out of the channel at 6.40 would shift the bias back to the topside. 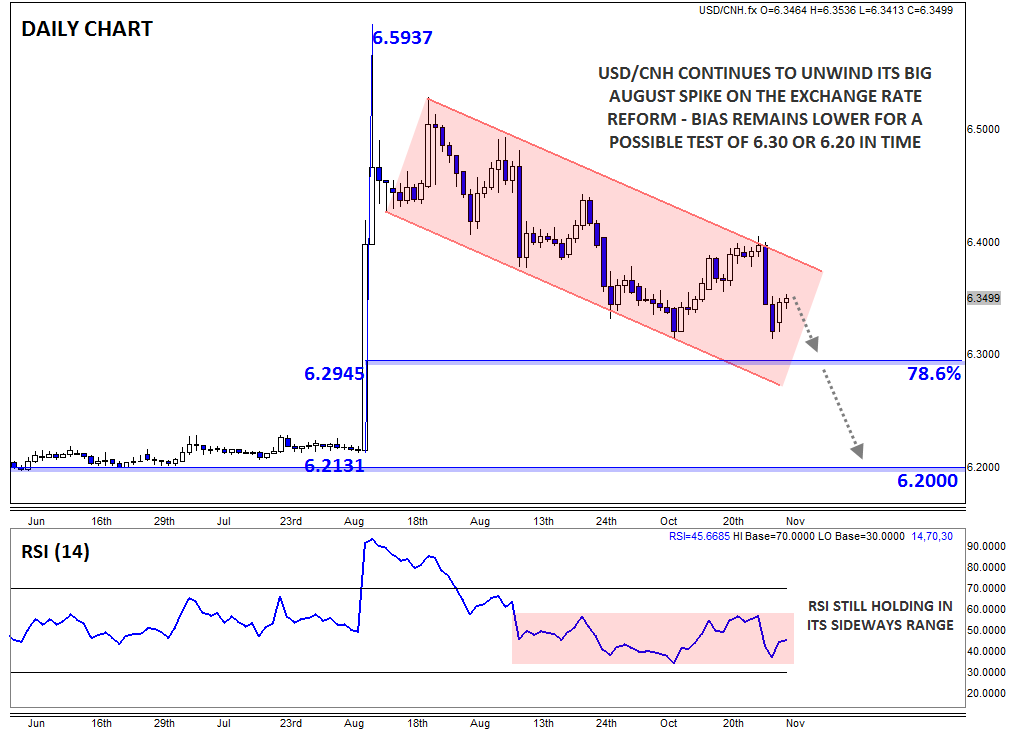