NZD/USD’s stomach upset by sour milk (prices) – Will employment data be the remedy?

Market activity and economic data are starting to pick up as we move toward the middle of the week, and one of the “warm up” acts for the headlining releases out of the UK and US later this week has already taken the stage. I’m referring, of course, to the NZD/USD and today’s key New Zealand economic figures.

Earlier today, traders got their first glance at the biweekly Global Dairy Trade (GDT) price auction, which showed that dairy prices fell by 7.4% over the last two months. After four consecutive reports showed 10% gains in dairy prices in August, September, and October, dairy prices have now fallen for two consecutive auctions, dashing the hopes of bulls who were looking for a bottom in dairy prices. For the uninitiated, dairy makes up a third of New Zealand’s exports and is closely correlated with the value of the New Zealand dollar itself.

Predictably, the kiwi is edging lower today, but an even bigger market mover may be on tap tonight, when Statistics New Zealand releases the Q3 employment report at 20:45 GMT (16:45 EST). Because New Zealand only releases its labor market data quarterly (in contrast to most other developed countries, which release similar reports monthly), the employment report tends to have an outsized impact on the price of the kiwi and other New Zealand assets. Traders are anticipating that the unemployment rate to edge up to 6.0% (from 5.9% in Q2), despite an expected 0.4% increase in total employment. After bottoming at 5.4% this time last year, the unemployment rate may now rise for its fourth consecutive quarter, though it will still be well below its Great Financial Crisis peak above 7.0%.

As you might imagine, the near-term technical considerations on NZD/USD will likely be dwarfed by today’s major fundamental data, but it’s still worth highlighting some of the key support and resistance levels to monitor.

If we see a disappointing jobs report, the most important zone to watch will be around .6600, which represents the convergence of the 100-day MA and bottom of the near-term bearish channel. A break below that level could open the door for a deeper retracement toward the .6400-.6500 range, especially if NFP comes out solid on Friday. On the other hand, a strong NZ jobs report could take the pair through the topside of the near-term bearish channel to expose the 200-day MA and 50% Fibonacci retracement at .7000 next. Either way, NZD/USD traders are optimistic that we’ll see volatility return to the pair this week. 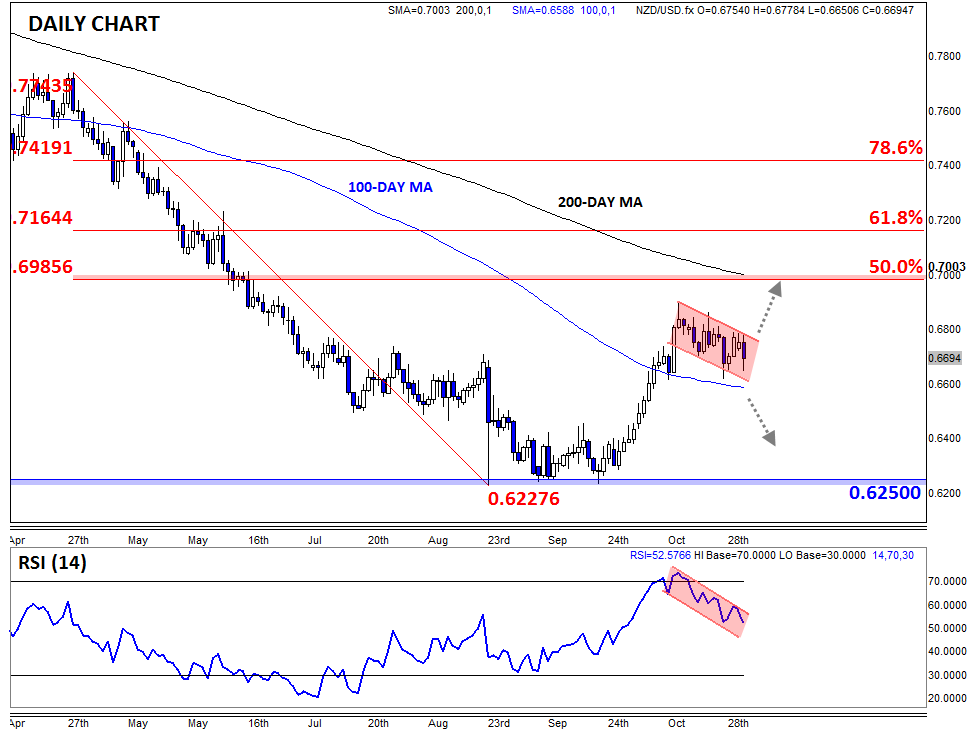