The UK’s FTSE 100 is up a good 1 per cent at the time of this writing and is up for the third consecutive day, mirroring similar gains across Europe, excluding Germany where another big drop in shares of VW are exerting strong pressure on carmakers across the board. The overall stock market sentiment has improved first and foremost because of fading concerns about the health of the Chinese economy, which together with the expectations of tighter oil and copper markets have helped to lift commodity-linked stocks. Investors also appear to be more relaxed about the prospects of an imminent interest rate lift off in the US. This is in part because of the fact polices at the world’s other major central banks will continue to remain extremely accommodative. Indeed, the ECB may even expand its current QE programme in size, duration and composition in December. If seen, this could weigh further on the euro and help to boost exports in the single currency bloc. To prevent the US dollar from appreciating significantly, the Federal Reserve will almost certainly avoid an aggressive tightening cycle, meaning their policy stance will remain accommodative for the foreseeable future, too, even if they raise rates slightly in the near term. Against this backdrop, stocks are continuing to push higher and in the US the major indices are now a few percentage points away from achieving their previous record highs.

The latest services PMIs from China and the UK have topped expectations, which is another reason for the rallying stock markets. Overnight, the Caixin services PMI came in at a three-month high of 52.0 in October, up from 50.5 in September. Earlier this week, the Caixin manufacturing PMI was slightly ahead of expectations, albeit at 48.3 it remained firmly below the boom/bust level of 50 for yet another month. Nevertheless, the composite PMI now stands at 49.9, an improvement from 48.0 in September. In the UK, meanwhile, the dominant services sector PMI improved to 54.9 in October from 53.3 in September, beating expectations of 54.6. The focus now turns to the US where we will have the ADP private sector jobs report for the month of October and the latest ISM non-manufacturing PMI reading this afternoon. These will be among the leading indicators for Friday’s official jobs report and so will be very important for the US dollar and equities.

In addition to the better-than-expected Chinese data and the corresponding 4.3% rally in the Shanghai Composite Index overnight, the commodity-heavy FTSE 100 has been boosted by the rallying prices of oil and copper over the past few days, although gold prices have weakened on the back of a firmer US dollar. Nevertheless, precious metal miners such as Randgold Resources and Fresnillo are both trading higher along with the other miners. As mentioned, copper prices have been lifted by receding concerns about the health of the Chinese economy and also on news commodities trader Glencore has revised upwards the amount of copper it would cut from its African operations, namely by a further 55,000 tonnes, in an attempt to prop up prices. The news has lifted Glencore to the top of the FTSE with a gain of almost 7 per cent, no less. Oil meanwhile has been rallying in part because of expectations of higher demand for crude products in the coming months as more US refineries come out of their end-of-season maintenance works.

Meanwhile from a technical point of view, the FTSE is looking more constructive now. It has managed to hold above the previous resistance level at 6300 quite comfortably so far, suggesting the selling pressure is easing. It has now moved above the 100-day moving average (6415) and taken out the bearish trend line too. A decisive break above previous resistance at 6490 would be an additional bullish development. If seen, the index could then rally towards the 61.8% Fibonacci retracement level at 6605/7, before potentially embarking on a rally towards the 200-day average at 6666. This bullish outcome would be invalidated upon a break below 6300 support, although a move back below the short-term bullish channel would also be a bearish development. 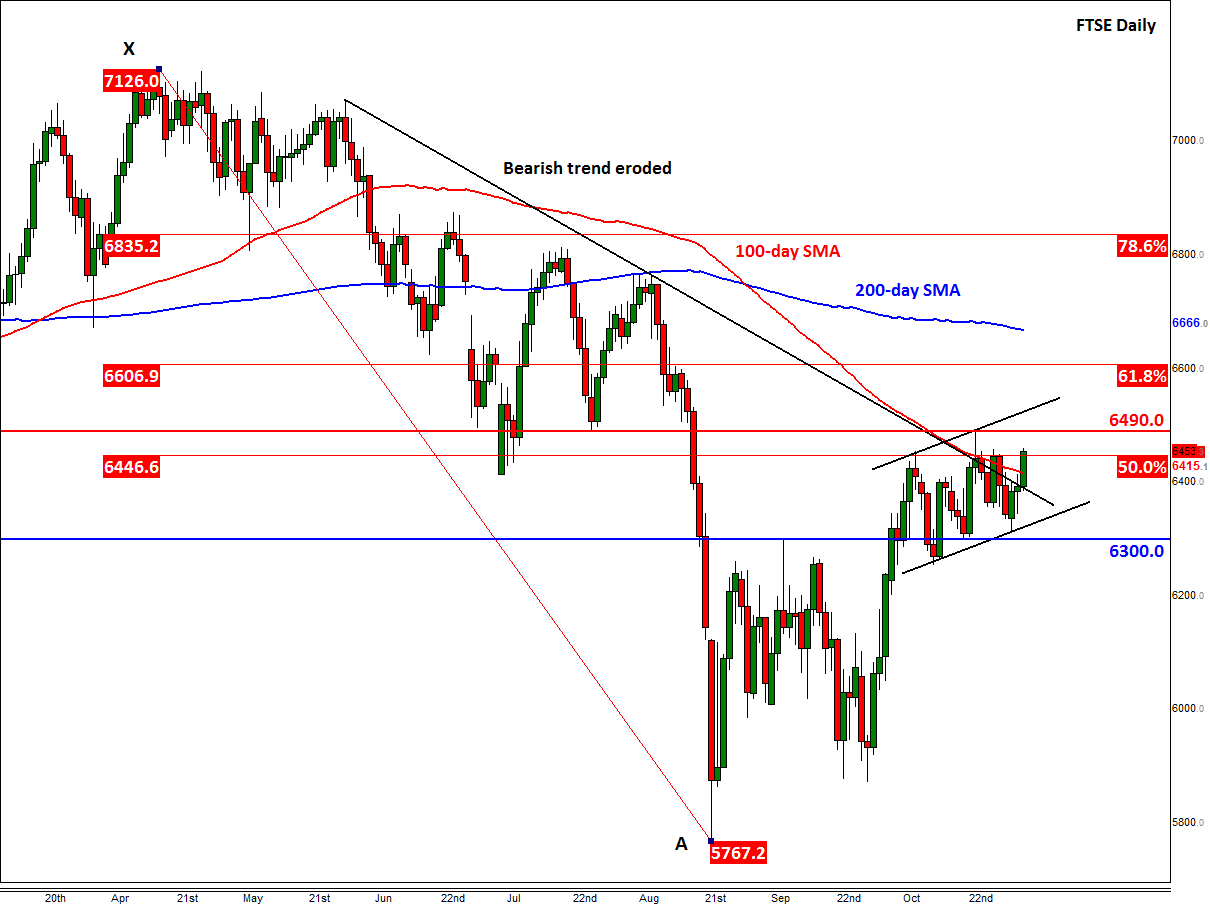