As we noted yesterday, the New Zealand dollar (and associated economic data) was serving as a “warm up” act for the “main event” US and UK data to come. Based on what we’ve seen though, it was a rather disappointing warm up, at least for kiwi bulls.

Following yesterday’s disappointing GDT auction data, traders learned that the New Zealand economy actually saw a 0.4% decline in employment in Q3, badly missing the expectations for a 0.4% rise. Meanwhile, the unemployment rate in the island nation rose to 6.0%, as anticipated. This disappointing report raises the risk that the Reserve Bank of New Zealand will have to cut interest rates by year-end, and the kiwi has suffered as a result.

Potentially the most interesting pair to watch is NZD/JPY, which has formed a crystal clear head-and-shoulders pattern over the last three weeks. For the uninitiated, this classic price action pattern shows a shift from an uptrend (higher highs and higher lows) to a downtrend (lower lows and lower highs) and is typically seen at major tops in the chart.

Just yesterday, the pair broke below its neckline (which coincided with the 23.6% Fibonacci retracement at 80.30), confirming the pattern and opening the door for a big leg lower. The recent rounded top in the RSI indicator also supports the view that the bullish momentum has rolled over.

Based on the measured move objective (the height of the pattern, 230 pips, projected down from the neckline), NZD/JPY could all the way to 78.00, but more conservative traders may want to look toward the 38.2% Fibonacci retracement at 78.90 as a more attainable target. At this point, only a strong rally back above the right shoulder at 82.00 would turn the bias back in favor of the buyers. 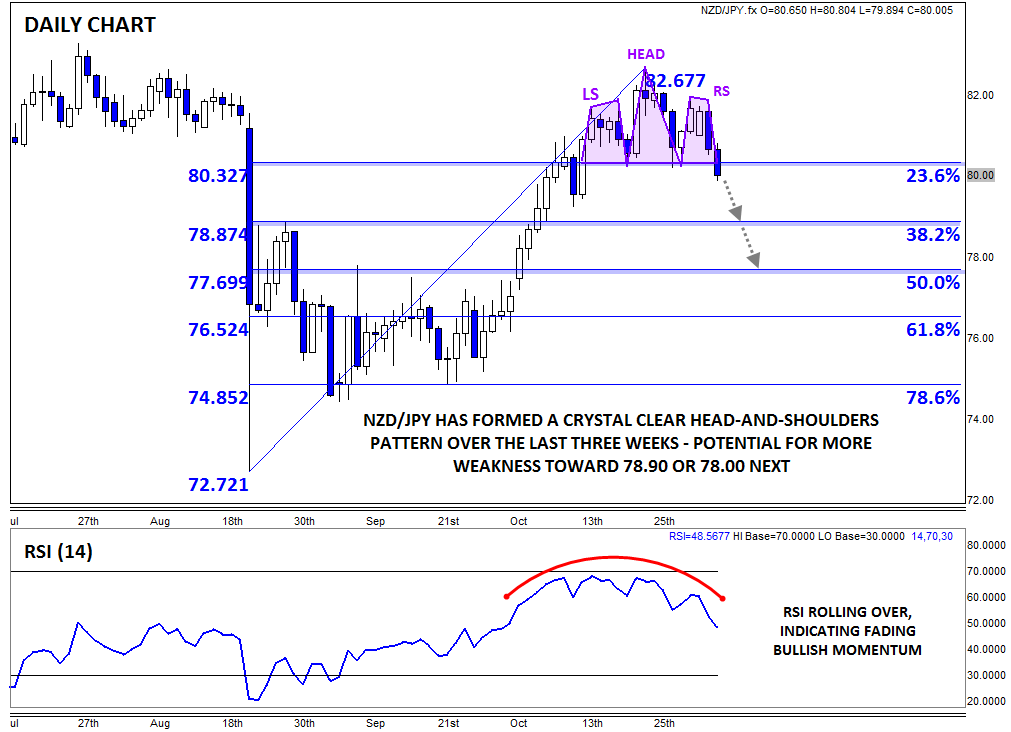