As my colleague Fawad Razaqzada noted earlier today, traders were waiting with bated breath for the Bank of England’s “Super Thursday” festivities to kick off the final rush of top-tier economic data ahead of the weekend. As it turns out, the event only lived up to its billing for bears, while bulls were left holding the bag.

Predictably, the BOE left interest rates unchanged at 0.5% for the 80th consecutive month while also refraining from making any changes to its long-running Quantitative Easing program. Just like last month, there was only one dissent in favor of raising interest rates (pound bulls had been hoping that another hawkish member or two would join Ian McCafferty).

In the press conference following the release, BOE Governor Carney reiterated the cautious tone laid out in the statement and inflation report. Key comments from Carney’s presser follow (emphasis mine):

Just looking at the headlines, it’s a bit difficult to characterize them as unanimously hawkish or dovish, but on balance, it looks as if the BOE is content to wait for the Fed to act first despite the decent UK economic data of late. With fears of a referendum on “Brexit” (UK exit from the European Union) in the next two years as a potential tail risk for the economy, it looks like the BOE will take a “slow and steady” path when it does decide to normalize monetary policy, rather than the more aggressive tightening that bulls had been hoping for.

The pound’s reaction bears out (no pun intended) the dovish view of “Super Thursday.” GBP/USD has dropped sharply in the immediate aftermath of the release, shedding over 130 pips to test a three week low at 1.5250. Meanwhile, EUR/GBP has surged back above .7100, forming a possible Bullish Engulfing Candle* in the process (see chart below). The yield on the 10-year Gilt has fallen 3bps to 1.965% as of writing, while the FTSE rallied back to unchanged on the day at 6410. 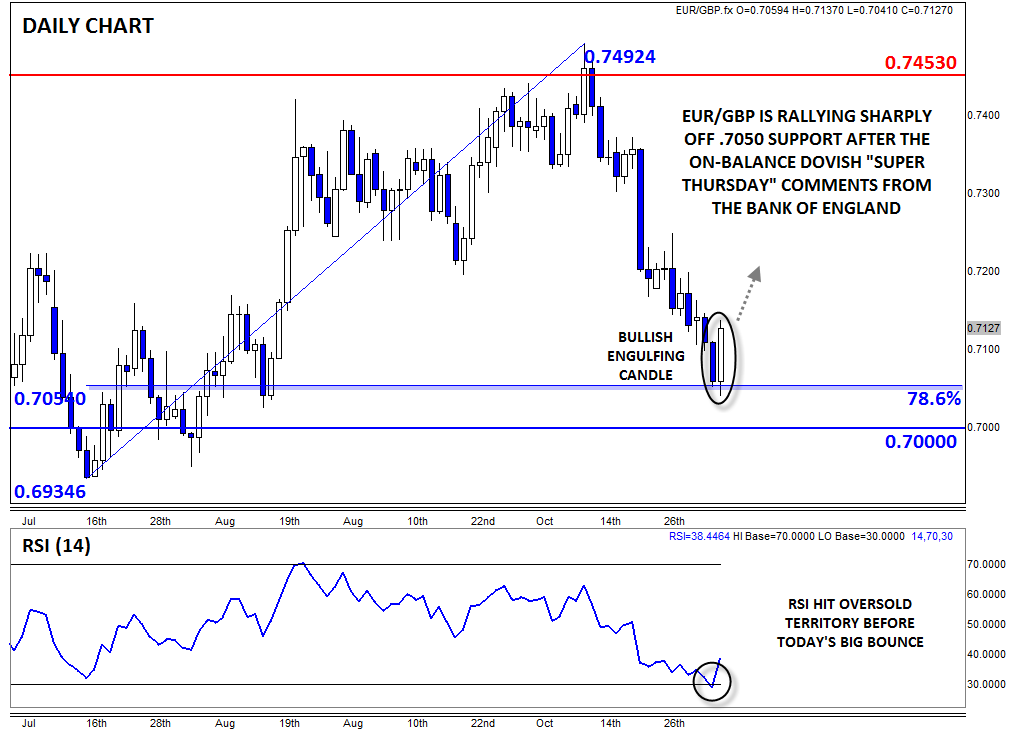