European equity markets have extended their falls from yesterday, but are off their worst levels as we go to press. Evidently, traders are worried about the impact, in particular on emerging markets economies, of a potential US interest rate hike in December. The odds a rate increase increased dramatically thanks to the solid US monthly jobs report that was reported on Friday. On top of this, Chinese economic growth concerns are also in focus again after Sunday’s weak trade figures were followed by equally weak inflation data overnight, with CPI falling to 1.3 per cent in October from 1.6% in September. But with little further global economic numbers to look forward to until China’s industrial production data is released on Wednesday, there is the possibility that equities may bounce back later on in the session. Bullish traders – who still prefer to buy the dips due to expectations that global interest rates outside of the US will continue to remain at historically-low and in some cases negative levels for the foreseeable future – may find better value at these slightly lower levels. However most of this group of market participants may prefer to wait for an even deeper retracement before showing their presence once again, particularly as there is increased risk of short-term volatility due to the upcoming data from China on Wednesday. So the correction potential is there.

As mentioned, Friday’s stellar jobs report has increased the odds of a December rate increase in the US, though the weakness in data elsewhere suggests the Fed almost certainly won’t be starting an aggressive hiking cycle at any time soon. So interest rates will most likely remain low for some time yet, which should be positive for US stocks. What’s more, the Chinese central bank could further loosen its policy if the current trend of disappointingly weak economic numbers continues, while the ECB has already paved the way for a potential expansion of its asset purchases programme in December. The Bank of England has also turned more dovish as it now expects inflation to remain low for even longer. In theory this should continue to boost the appeal of European exports, especially to the US where the appreciating US dollar means it is cheaper for American citizens and businesses to import goods and services from Europe.

But the UK’s FTSE is prevented from rising significantly by the underperforming commodity sector owing to lower oil and metal prices. The sector is again not doing great today. Nevertheless, there are a few individual companies that are helping to provide some support today. Vodafone, for example, is up a good 4.5 per cent after the world's second largest mobile operator reported better than expected revenue growth. Experian – the world's largest credit data company – is also up sharply after it raised its dividend by 2 per cent.

From a technical perspective, the FTSE was testing a key technical area between 6250 and 6265 at the time of this writing. As can be seen from the chart, this area was formerly resistance and support. Thus what happens here could determine the short-term direction. A strong bounce from this support area, preferably combined with a daily close above prior support at 6310, could lead to another rally towards the key resistance zone between 6445 and 6490, an area which was defended successfully by the sellers throughout October and at the start of this month. However, if the buyers fail to defend the 6250-65 support zone then there is the potential for another sharp drop, especially if the 50-day moving average, at 6240/5, also fails to hold on a closing basis. In this scenario, the bears may then aim for the Fibonacci levels and the bullish trends shown on the chart as their next targets. But until and unless this happens, the bulls will still have a slight edge. 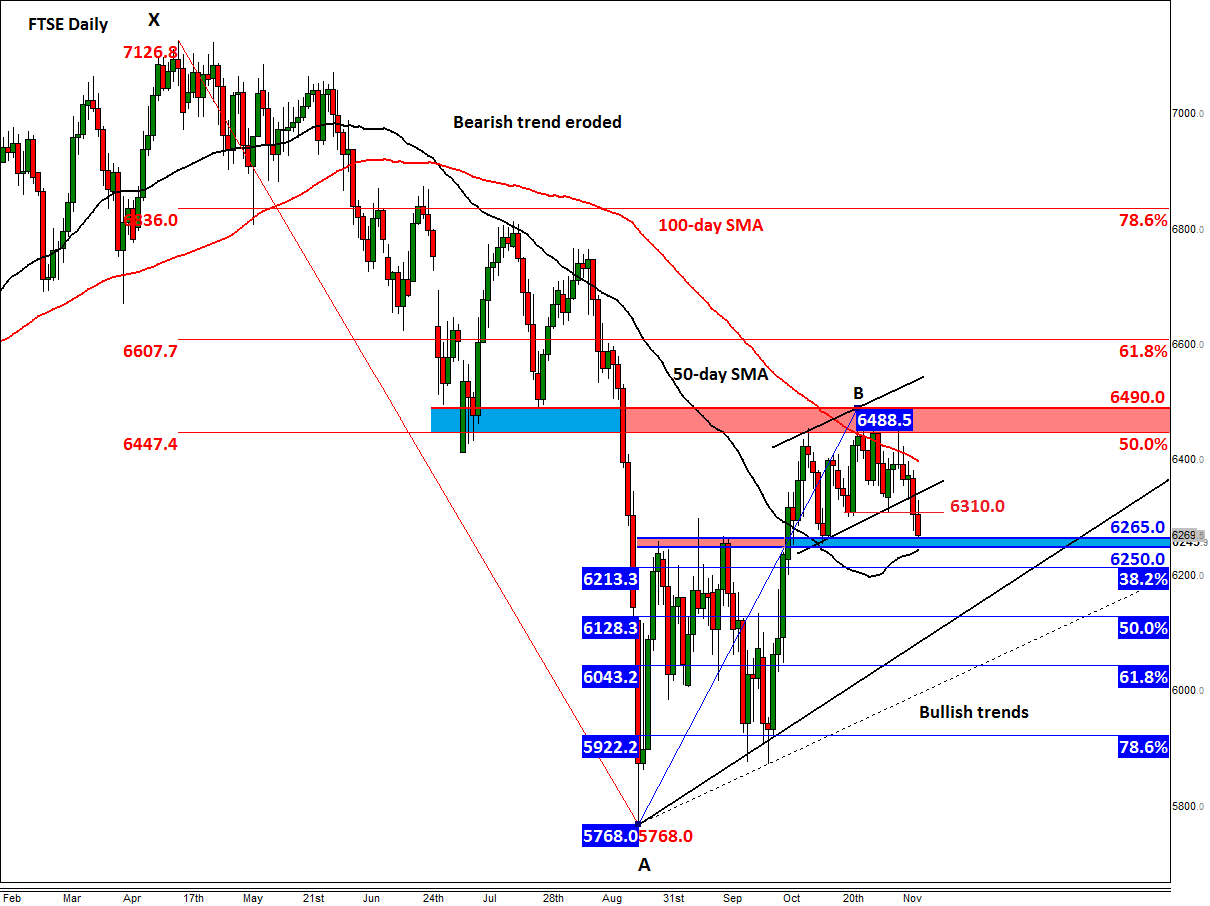