The stock and commodity markets tumbled last week as investors worried about the impact of a slowing Chinese economy and as growing expectations over a potential rate increase in the US kept the dollar elevated. The terrorist attacks in Paris on Friday evening increased risk aversion further, leading to a sharply lower open in Asia Pacific overnight, with the major index futures all gapping lower. European indices have now more than filled those gaps and turned green: a usual response post a terror attack. On this occasion, investors had the whole of the weekend to digest the news, so the panic trading only last a few minutes after the Asian open overnight. But now that the European morning session is out of the way, another wave of selling could begin once the kick-back rally loses momentum – perhaps when US investors return to their desks later on. Indeed, equities remain on shaky footing as sentiment is still downbeat about the global economy, with Japan sliding back into recession with a slightly more than expected 0.2% contraction in the third quarter. Tourism, travel and insurance stocks could get hit hard globally – and stocks in these sectors are sharply lower already today – if we see evidence of more terror attacks or threats thereof, although this could be offset slightly as geopolitical risks tend to boost oil and gold prices and therefore stocks in those sectors.

There are not much data scheduled for today, but things should pick up from tomorrow when we have among other things the UK and US Consumer Price Indices and the latest German ZEW economic sentiment survey. Minutes from the FOMC’s last meeting, due out on Wednesday, could provide valuable information regarding the potential time of a lift off in US interest rates. Then it’s the Bank of Japan’s policy meeting on Thursday and with the local economy thinking 0.2% in the third quarter to slide back into another recession, there is an increased possibility that the central bank may expand the size of its asset purchases programme. Indeed, it is the promise of more QE from the likes of the BoJ and ECB and record low interest rates that is helping to keep stocks still elevated. Without such support and in times like now, one would expect stock prices to be a lot lower than they are.

As a result of this morning’s kick-back rally, the French CAC index has recovered sharply and at the time of this writing it was holding its own comfortably above the resistance-turned-support level of 4745. The near-term bias remains neutral while it holds above here on a closing basis. However, a decisive break below 4545 could pave the way for significant losses. In this scenario, the index could initially drop back to the 50-day moving average, around 4695, before potentially extending its decline towards the 161.8% Fibonacci retracement of the most recent upswing at just over 4525. On the upside, there is an area of resistance around 4825-4840 which needs to be cleared if we are to see a move towards the 200-day moving average, at just under 4900, and beyond. 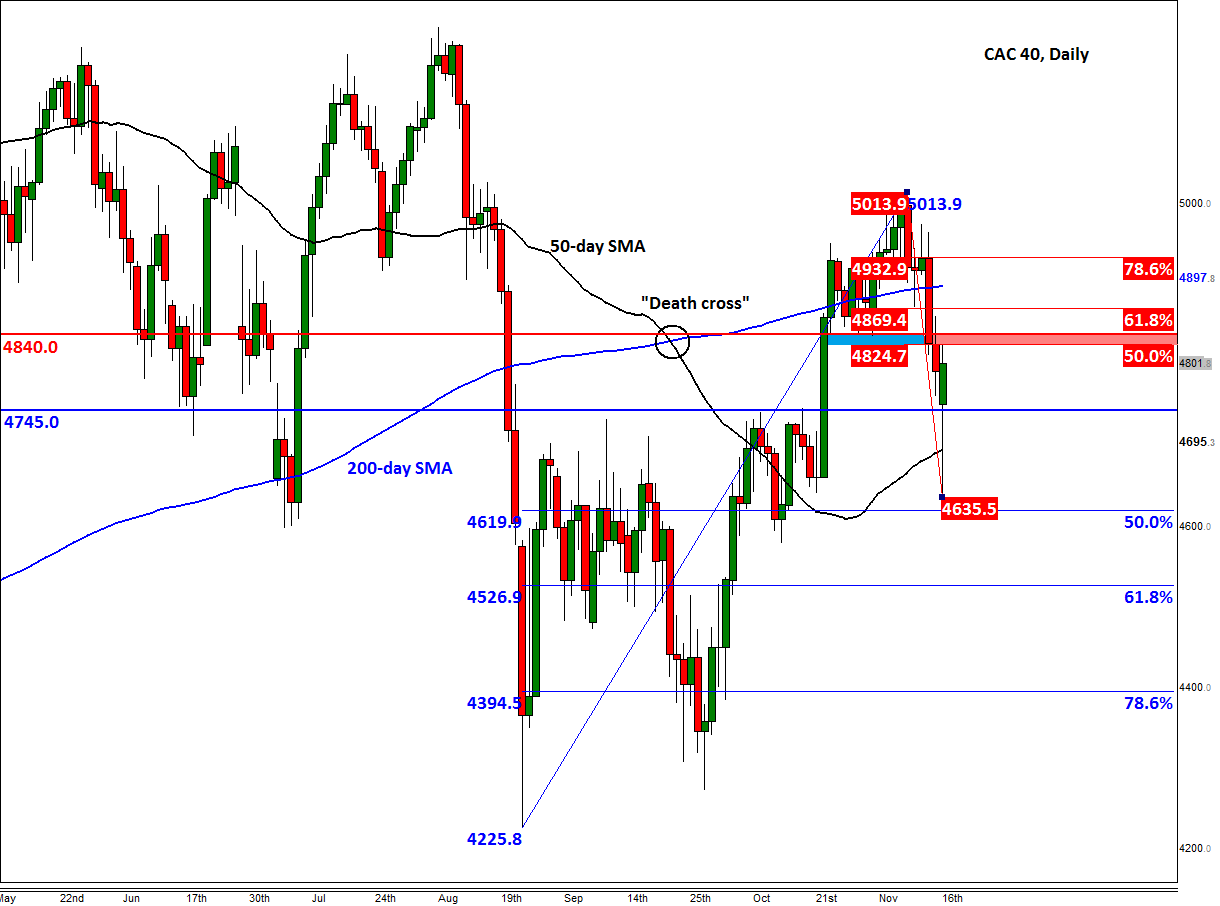