FTSE: rally could be short-lived for stocks

European stocks are higher for a second day as the fallout from Friday’s Paris terror attacks recedes further. The negative sentiment gave investors the opportunity yesterday to once again “buy the dip” in equities. At times like now, when interest rates in development economies are virtually zero and some central banks are further depressing borrowing costs by means of buying bonds, equities are among a handful of asset classes that provide decent yields with an acceptable degree of risk. Of course, the ECB and BOJ may decide to further expand the size and composition of their asset buying programmes in the coming months and this could provide additional support for equities. But in the very short term, it will be interesting to see if the markets will be able to maintain the gains made over the past couple of days. Indeed, with commodity prices falling – copper, for example, has hit a fresh six-year low today – growth worries could re-ignite and cause sentiment to turn sour once more. Weak demand from China, plentiful supply despite sharp output cuts by miners such as Glencore and a strong US dollar are among the factors weighing on copper. Crude meanwhile finally found some support on Monday after falling virtually in a straight line for the best part of two weeks. The general improvement in risk appetite is part of the reason why oil has bounced, especially since prices were severally oversold. Speculators were looking for an excuse to book profit on their short positions and the unfortunate tragedy in Paris that led to retaliatory French bombardments of IS target in Syria, which raised supply-side risks, gave them that excuse. But given that the oil market remains amply supplied at the moment, I wouldn’t be surprised if this latest bounce in oil fails to turn into a significant rally, though in the very short-term we may see some further short-covering gains.  So the impact of a potential rebound in commodity prices on stocks could be short-lived.

The large green engulfing candles on the daily charts of almost all of the major global indices suggests that at least from a technical point of view, the bullish trend may have resumed. But the S&P, DOW, DAX and FTSE are all still below their respective 200-day moving averages, so it is far too early to say for sure whether the long-term bullish trend has resumed. Indeed, the UK’s FTSE 100 is dominated by commodity-linked stocks, and this makes it extremely vulnerable with metal prices falling and oil remaining largely out of favour despite Monday’s bounce.

At the time of this writing, the FTSE was testing the broken resistance-turned-support level of 6265. Given the past price swings around this key level, we wouldn’t be surprised if the FTSE falters here once again.  But if it goes through it then the bulls will grow more in confidence since they have already witnessed the formation of a rather large bullish engulfing candle the day before, when the index also held above a short-term bullish trend line and the 61.8% Fibonacci retracement level (around 6040) against the August low. In other words, a decisive break above 6265 could lead to further sharp gains, at least in the short-term anyway. The next resistance could be provided by the bearish trend line that has been in place since before the start of the summer, although if we break through it then the longer term outlook would turn bright for the bulls and as a result we may see a reversion to the mean: a revisit of the 200-day average at 6640 or thereabouts. 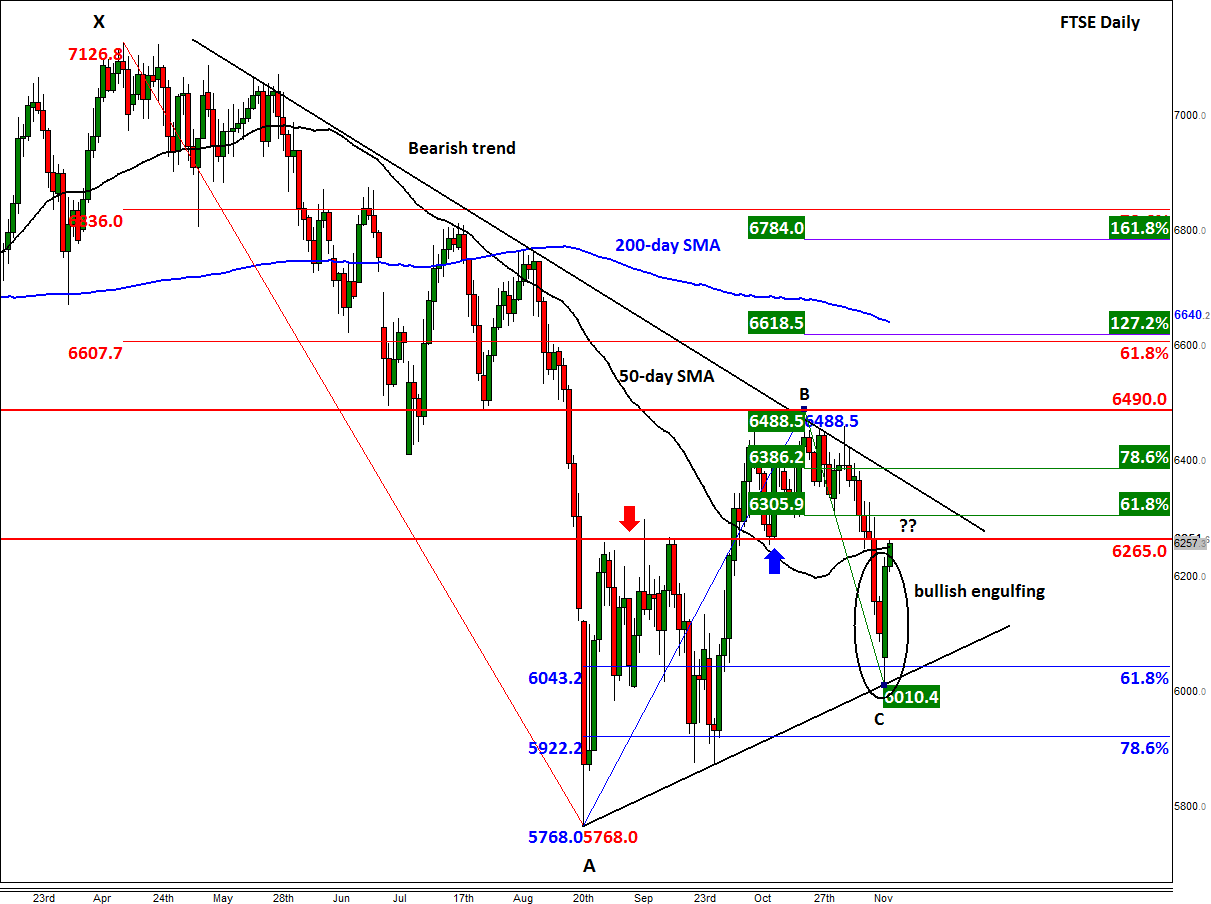