After a weaker open, European stocks have pared most of their losses and some indices have turned green. US index futures point to a slightly firmer open on Wall Street, following a flattish session the day before. It has been a rather quiet session so far. Traders have been sitting on their hands due to the lack of any notable Asian or European data, though shares in airlines fell slightly after more security alerts were issued in Western Europe; police operations in France and a terrorist attack left scores of people dead in Nigeria. But overall, the market appears resilient to terror threats and with the absence of any other sentiment-sapping news, investors are beginning to grow more in confidence and are evidently coming back into the stock markets following the recent wobble. And who would blame them? After all, yields are universally extremely low; bad news continually gets shrugged off; selling pressures have so far been relatively mild and short; oil prices are low, which is good news for the consumer, and gold and other safe haven assets are falling, to name but a few bullish indications. Indeed at a government bond auction today, Germany sold two-year debt with a yield of -0.38% which is a record low. Investors are effectively paying to own the debt. Yield-seeking investors are thus left with little choice but to invest in equities which pay decent yields at acceptable levels of risk.

The lower and falling Eurozone bond yields, combined with a significantly weaker currency, which should continue to help exports, means the long-term fundamental outlook for the European stock markets continues to remain bullish. In the short term however there are some headwinds that may cause the markets to fall, including fears about the slowing down of the Chinese economy and the impact of a potential rate increase from the US Federal Reserve on emerging markets. Speaking of the Fed, tonight’s release the FOMC’s last meeting minutes could provide some valuable information regarding the timing of a rate increase. But the good news I suppose is that so far the US markets have shown little concern about slightly higher interest rates there, with the S&P 500 and other leading indices noticeably outperforming their European peers since the markets bottomed at the end of August. So, it could only be a matter of time before the S&P revisits and potentially breaks through the previous record high.  A Santa Clause rally could be on the way, in other words.

From a technical point of view, the S&P appears poised for a sharp move as it hovers in no man’s land between key support and resistance areas. But in which direction will it break out? That’s a million dollar question, but we could have a better idea by the end of today’s session. On Monday, the S&P created a huge bullish engulfing candlestick formation, which more than erased Friday’s losses. There was a shift from selling to buying pressure, in other words. Then, on Tuesday, the index pushed further higher, but hit resistance around 20645, a level which corresponds with the 200-day moving average. Consequently, it gave up the gains made earlier and closed the session flat, which helped to create a Doji candle on the daily chart.

As neither the bulls nor the bears were in full control on Tuesday, there is some incisiveness in the markets. This indecision could end once we break decisively outside of yesterday’s trading range. One should expect to see a sharp move in the direction of the breakout. As things stand, the trend is looking slightly bullish, for the sellers have only managed a relatively small gain following the most recent sell-off. Put another way, the bulls only gave back approx. 38.2 per cent, rather than, say, 61.8% of the gains made since the markets hit a bottom at the end of August. In addition to this small pullback, the index held its own above the 50-day moving average, where it also created a large bullish engulfing candle. The buyers will now want to see a break above Tuesday’s high and through the 200-day moving average around 2067. The 61.8% Fibonacci level of the most recent downswing from point B, comes in at 2073. For confirmation, they will need the index to clear 2073 before one can conclude that that correction trend is over. If this happens, November’s high of 2116/7 could be revisited and potentially the previous all-time high, too.

Conversely, if the sellers are able to push the index underneath Tuesday’s low and support at 2045 then there is a possibility that the index could drop and revisit the 2008-2020 key support area, before it decides on its next move. So, today could be a very important day in the markets – at least as far as the technicals are concerned anyway. 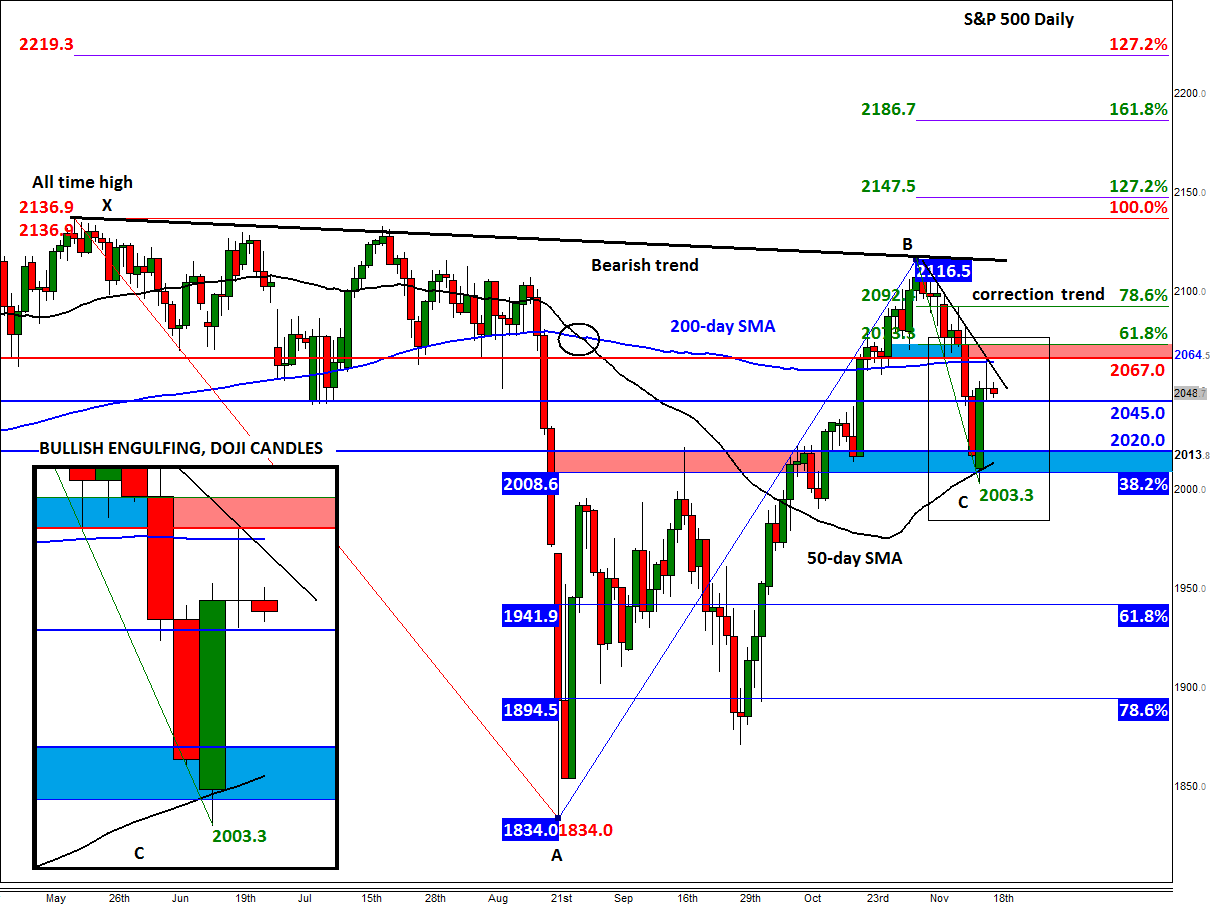 Source: FOREX.com. Please note, this product is not available to US clients.