After Monday’s big dollar-bullish move, the foreign exchange market has been relatively mixed over the last 48 hours, not coincidentally mirroring the uncertainty traders are feeling toward future Federal Reserve policy. The widely-watched EUR/USD pairing fell to a fresh 7-month low in the mid-1.0600s before bouncing modestly today, while other European currencies, as well as the commodity dollars, were steadier. Thankfully, today’s release of the minutes from the October Fed meeting could go a long way toward ameliorating traders’ uncertainty about monetary policy.

In its October meeting, the Fed made some dovish tweaks to its statement on the economy and policy, prominently mentioning that it was now determining “whether it would be appropriate to raise the target range at its next meeting” from the more nebulous “determining how long to maintain” current interest rates.

In addition, the central bank opted to remove the line "recent global economic and financial developments may restrain economic activity somewhat and are likely to put downward pressure on inflation in the near term" from its last statement, implying a more upbeat view of the world economy, or at least limited spillover to the US. Today’s minutes will help show whether this hawkish shift was a unanimous or merely majority decision, which could help traders better handicap the likelihood of a December rate hike.

Of course, it’s worth noting that the Fed’s meeting took place before the impressive October employment report (released November 6), so any apprehension on the part of dovish FOMC minutes may have faded since then anyway. With even the most ardent of doves (Rosengren and Evans) recently stating that the wouldn’t oppose a December rate increase, we believe that the FOMC minutes could serve as a bullish catalyst for the US dollar, and could prompt traders to revise the probability of a rate hike this year up from the current 68% priced in to the market.

Because the minutes are likely to impact the US dollar across the board, it makes sense to keep an eye on the US dollar index ahead of the big release. From a technical perspective, the chart looks very constructive short-term, with the dollar index seemingly resuming its uptrend after pulling back to test previous-resistance-turned-support in the 98.00-50 zone. The secondary indicators also point to the potential for further gains, with the RSI not (quite) in overbought territory and the MACD trending higher above both its signal line and the “0” level.

Looking ahead, bulls eyes are being drawn toward the psychologically-significant 100.00 level, but if the minutes are as hawkish as some traders expect, the greenback could trade above that level. On a longer-term basis, the 61.8% Fibonacci retracement of the entire 2001-2008 decline comes in around 101.75 (not shown) and could be the next area bulls target from here. This matches up nicely with many traders’ medium-term targets on individual currency pairs, including 1.0500 in EUR/USD and 125.00-126.00 in USD/JPY. 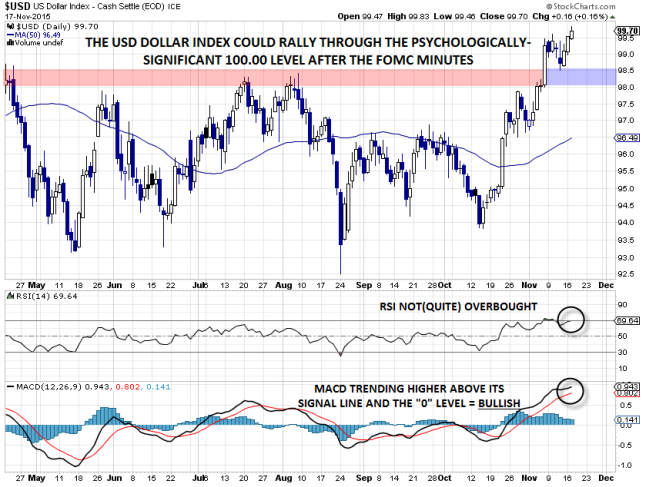