Earlier today we reported that the US stock markets were on the verge of a big move, depending on how Wall Street closes today’s session. The fundamental bullish view we discussed for the S&P 500 also applies at least equally if not more so for European markets, most notably the German DAX index. Unlike in the US, the European Central Bank is still very dovish and is seriously considering increasing the size and composition of its bond buying programme in December. In theory, the euro should continue to move lower, making European exports comparatively competitive, which in turn should help to boost economic growth. Meanwhile the cheaper borrowing costs means individual and business spending could increase, further fuelling growth, wages and eventually inflation in the Eurozone. At least that is what the ECB is hoping to achieve.

The markets also appear to have shrugged to the recent terror threats and with the absence of any other sentiment-sapping news, investors are beginning to grow more in confidence and are evidently coming back into the stock markets following the recent wobble. And who would blame them? After all, yields are universally extremely low; bad news continually gets shrugged off; selling pressures have so far been relatively mild and short; oil prices are low, which is good news for the consumer, and gold and other safe haven assets are falling, to name but a few bullish indications. Indeed at a government bond auction today, Germany sold two-year debt with a yield of -0.38% which is a record low. Investors are effectively paying to own the debt. Yield-seeking investors are thus left with little choice but to invest in equities which pay decent yields at acceptable levels of risk. However there are some headwinds that may cause the markets to fall back at some point, including fears about the slowing down of the Chinese economy and the impact of a potential rate increase from the US Federal Reserve on emerging markets. Speaking of the Fed, tonight’s release the FOMC’s last meeting minutes could provide some valuable information regarding the timing of a rate increase. But the good news I suppose is that so far the US markets have shown little concern about slightly higher interest rates there, with the S&P 500 and other leading indices noticeably outperforming their European peers since the markets bottomed at the end of August.

As far as the DAX is concerned, the technical picture is looking increasingly bullish and a breakout appears to be on the cards. As we went to press, the German stock index was testing its corrective trend (that has been in place since it achieved a record high in April) at or around 10990. A potential break above here would be a significantly bullish outcome as it would effectively invalidate the bearish argument. So the DAX could potentially go on to not only revisit but break the record high of around 12400 over time. But we are miles away from that level and traders will need to remain focused and not lose sight of the near-term trend and resistance levels. First and foremost, the bulls need to watch this month’s earlier high of around 11055/60 closely, followed by the 200-day moving average at 11090/5. If and when these levels are cleared then the bulls may aim for the Fibonacci convergence area of 11215/25 where the 61.8% retracement of the drop from the record high meets the 127.2% extension of the most recent downswing. The 161.8% extension comes in at 11410 then there is not much further resistance until the double bottom target and the 78.6% Fibonacci retracement level around 11720/45. So, there’s potential for a BIG rally.

The bears meanwhile will want to first and foremost see the bearish trend line hold, then hope that support at 10900 breaks. If that happens then there is a chance we will see a sizeable move lower. But as things stand, it is the bulls who are in the driving seat. 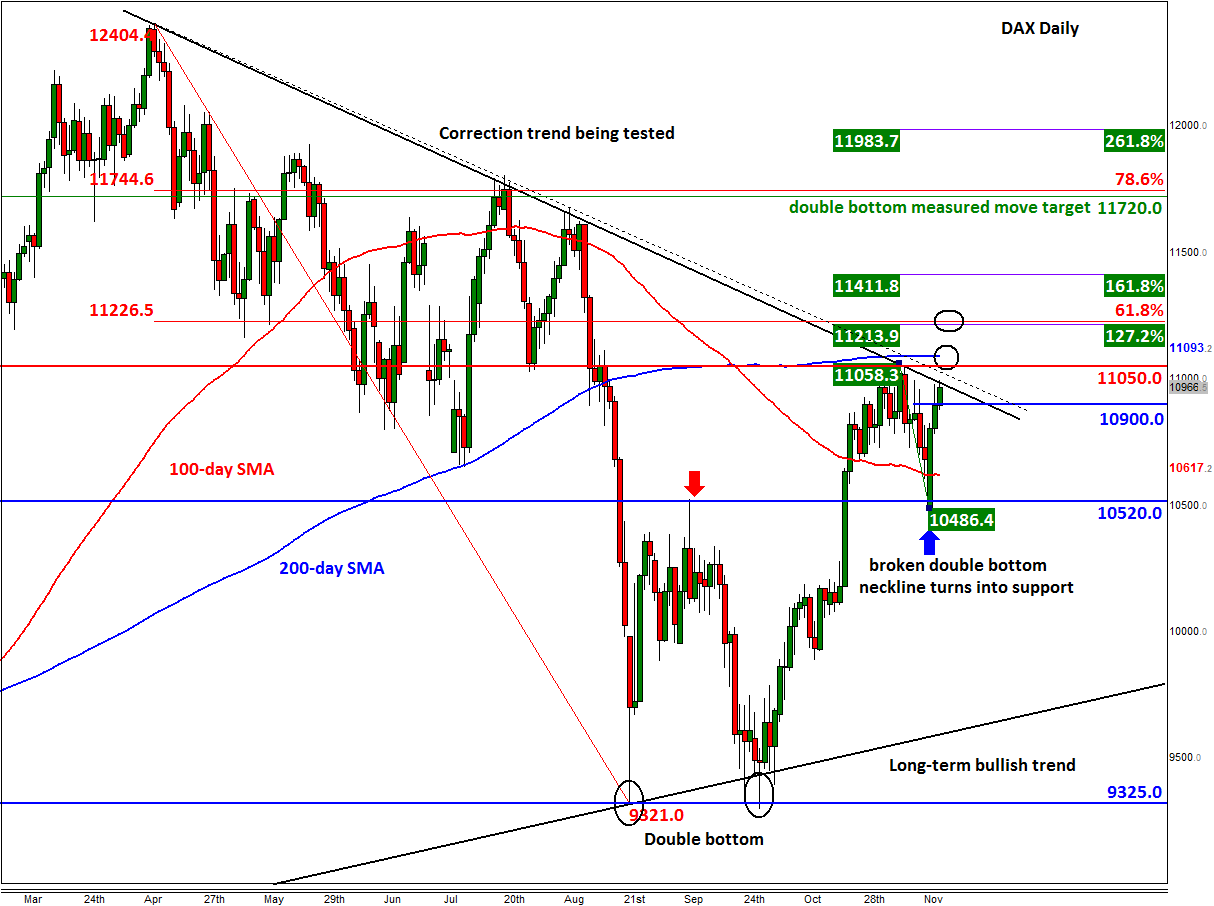