Crowded dollar longs are under a bit of pressure early in today’s US session as yesterday’s FOMC minutes left just enough ambiguity to keep traders guessing on whether the Fed will raise interest rates in December. Frankly, anyone who was expecting a clear signal from the notoriously opaque and non-committal central bank was barking up the wrong tree. Readers should remember that the October FOMC meeting took place before last month’s big NFP reading, which likely ameliorated some policymakers’ concerns, and it’s worth noting that Fed Funds futures traders are now pricing in a 72% probability of Fed liftoff next month, according to the CME’s FedWatch tool.

Therefore, today’s dip in the US dollar should be viewed as one of the inevitable counter-trend moves that occur with any crowded trade. That said, with little in the way of US economic data upcoming – Consumer Confidence and Durable Goods Orders are the only notable reports on next week’s holiday-shortened docket – the current bout of dollar weakness could stretch further in the short-term.

Based on its chart, one currency that could see some short-term strength against the greenback is the Australian dollar. After consolidating within a symmetrical triangle for the past several weeks, AUD/USD is peeking out above its upper trend line. For readers who are unfamiliar, this pattern is analogous to a person compressing a coiled spring: as the range continues to contract, energy builds up within the spring. When one of the pressure points is eventually removed, the spring will explode in that direction.

As long AUD/USD can hold its gains throughout today, the bullish breakout will suggest more near-term strength (the bullish crossover in progress on the MACD indicator strengthens the bullish case). In that case, buyers may look to target previous resistance and the 100-day MA around .7200-20 next, potentially followed by the .7300 if we see some mixed US economic data.

Despite the potential for near-term strength, it’s unlikely that we’ve seen a long-term bottom in the Aussie, given the clear US-AU monetary policy divergence and ongoing weakness in key commodity prices, prominently including industrial metals. 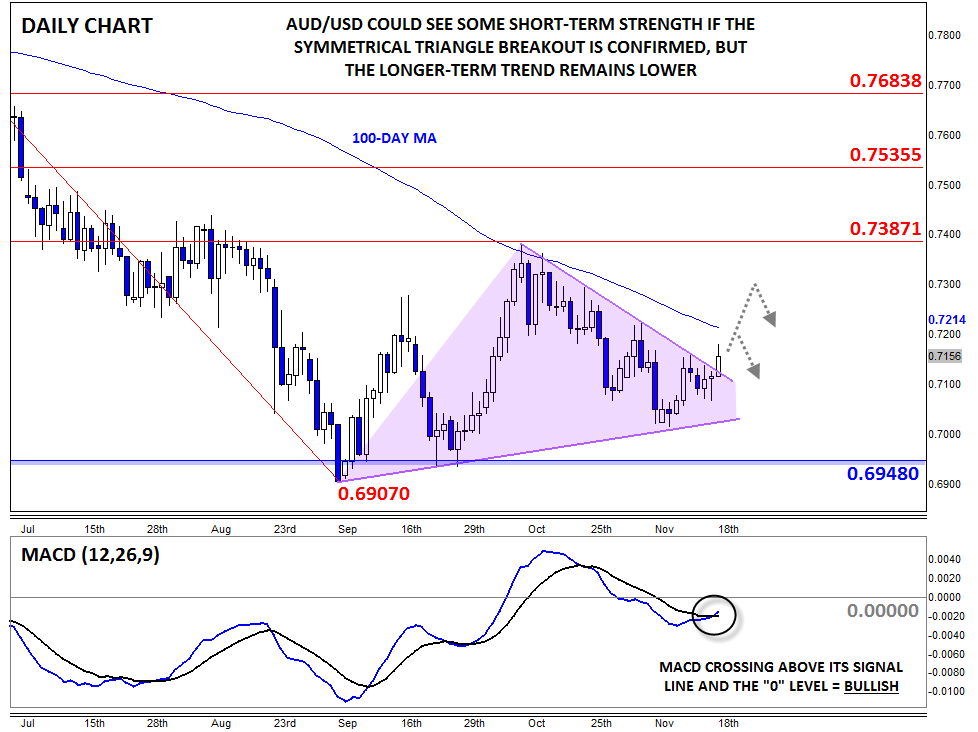