It’s been a rough day for the US dollar, and the big drop in the greenback doesn’t stem from a clear bearish catalyst. This morning’s US economic data was fairly mixed, with initial jobless claims printing in-line with expectations at 271k, while the Philadelphia Fed Manufacturing index ticked back into positive territory at 1.9 (from -4.5 last month and 0.1 expected).

The upcoming “Black Friday” holiday provides a perfect metaphor to help explain today’s dollar selloff. Much as some US consumers will camp out days, or in some cases, weeks before “Black Friday” in order to score the best deals, traders have been joining the crowded long dollar train for weeks in anticipation of the Federal Reserve potentially raising interest rates in December. As I’m sure many overeager shoppers found out though, standing in line outside a retailer for weeks, especially when there’s no guarantee of securing the promised deal, can get a little tedious.

Likewise, a lot of the traders who hopped into long dollar trades over the last few days may be questioning the wisdom of that decision, especially in the wake of yesterday’s ambiguous FOMC minutes. As the dollar ticked lower this morning, those low-conviction traders decided there were better uses for the time and capital, leading to a mass exodus and a wave of dollar weakness. It’s as if Best Buy had announced that the latest delivery of top-tier televisions may not arrive on time for Black Friday, and in fact, there was an outside chance that they wouldn’t be delivered until next year!

While some of the less zealous dollar traders are abandoning their long dollar positions, the fundamental case for dollar strength remains solid; after all, the US economy is outperforming all of its developed peers, and the Federal Reserve is still likely to be the first central bank to start raising interest rates. Therefore, the recent dip in the dollar could provide an opportunity to join the bullish dollar trend at value.

One currency that’s seen a notable bounce against the US dollar, both today and over the last two weeks, is the British pound. GBP/USD has rallied nearly 300 pips from its early November lows to trade back around the 1.5300 handle. Despite the recent bounce though, the medium-term bias in GBP/USD remains lower.

Over the last few six months, GBP/USD has carved out a clear rounded top pattern, suggesting a major high has formed and opening the door for more weakness in the weeks and months to come. Meanwhile, the RSI indicator has put in a series of lower highs over that period, showing growing bearish momentum over that period.

As long as cable remains below its 100-day MA at 1.5400, lower prices will be favored. To the downside, bears may look to push the pair down to the recent lows from earlier this month around the 1.50 handle, potentially followed the 78.6% Fibonacci retracement near 1.4860. 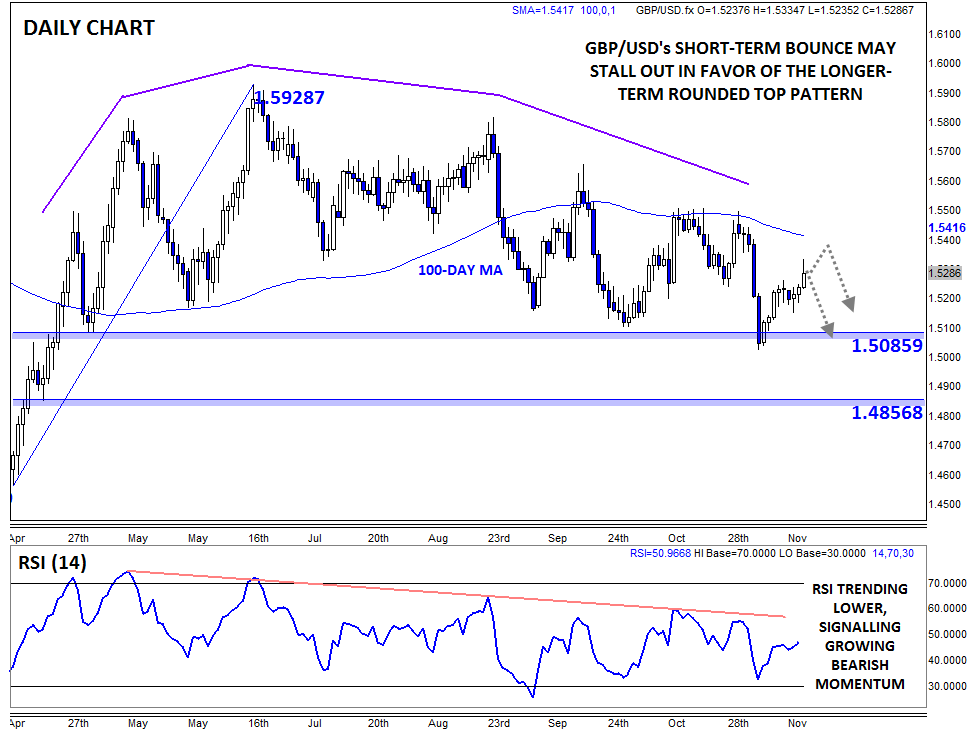