It has been a rather quiet morning in the markets and with US investors looking forward to Thursday’s Thanksgiving holiday it may well be a quieter week overall, though there will be lots of key data to spur some volatility in midweek. Today, European stocks are little-changed after opening on the back foot and US index futures point to a flattish open on Wall Street. But news that Pfizer and Allergan have agreed to merge in the biggest healthcare deal in history to create the world's top drugmaker may boost sentiment when Wall Street opens later. Investors have so far shown little enthusiasm to buy today’s dip despite news business activity and employment in the Eurozone climbed to a four-and-a-half year high in November, according to the closely-watched Markit Purchasing Managers' Indices (PMIs) that were released earlier this morning. Evidently, bullish speculators are happy to sit on their hands after making decent gains last week when the global equity markets had one of their best weeks in recent times. But essentially the bullish trend remains intact for stocks and so we wouldn’t be surprised if the markets bounced back later on in the day.

The latest Purchasing Managers’ Index (PMI) data from Markit was released this morning, showing that the Eurozone Composite PMI has surged to a 54-month high of 54.4 in November, up from 53.9 previously. On a sector basis, the services PMI climbed to 54.6 from 54.1, while the manufacturing PMI rose to 52.8 from 52.3. A reading above 50 indicates expansion and below 50 means contraction. The sub-indices of the report also showed impressive readings, with employment and new orders surging particularly in Germany.

The stronger Eurozone data is encouraging to observe and if we now see the start of a trend of better-than-expected figures then it may help to support the euro but it probably won’t stop the ECB from expanding the size of its bond buying programme in December. The potentially stronger euro in the short-term would probably be bad news for stocks, but these inter-market relationships won’t last forever and ultimately there will come a time when stock market investors will cheer good news. Indeed, today’s hesitation in the markets may have nothing to do with the stronger Eurozone data and the euro could easily turn around and make fresh multi-month lows, but we will have a better idea as more data is released later on in the week.  On Tuesday, the focus will turn to the German Ifo Business Climate, which is a highly regarded survey due to its large sample size and historic correlation with German and Eurozone economic conditions. If this shows that business confidence is growing once more following the VW emissions scandal and despite the terror attack/threats, then it will be interesting to observe the reaction of the equities markets. I would imagine that an improvement in data, regardless of the EUR/USD’s short-term movements, should be good news for stocks. Traders may also want to keep an eye on the second estimates of the third quarter GDP in the US and Britain due to be published on Tuesday and Friday, respectively.

As mentioned, the ECB could expand its QE programme in December which should be good news for stocks. On Friday, ECB President Mario Draghi said "we will do what we must” to get inflation back up to target "as quickly as possible." With bond yields being in negative territory and with the absence of any other sentiment-sapping news, the outlook for equities continues to remain bullish. The market’s reaction to the Paris terror attacks and also the hawkish FOMC minutes certainly supports this view.

Among the major European indices, the German DAX index is looking increasingly bullish. As we had anticipated last week, the index has now broken its corrective trend which had been in place since it achieved a record high back in April. This is potentially a significantly bullish outcome and effectively invalidates the previously bearish technical picture. So the DAX could potentially go on to not only revisit but break the record high of around 12400 over time. But we are miles away from that level and traders will need to remain focused and not lose sight of the near-term trend and resistance levels. First and foremost, the bulls need to tackle the 200-day moving average at 11095 as so far we haven’t decisively broken above it. If and when this is put right, the bulls may then aim for the Fibonacci convergence area of 11215/25 where the 61.8% retracement of the drop from the record high meets the 127.2% extension of the most recent downswing. The 161.8% extension comes in at 11410 then there is not much further resistance until the double bottom target and the 78.6% Fibonacci retracement level around 11720/45. So, there’s potential for a BIG rally.

The bears meanwhile will want to first and foremost see another rejection of the 200-day moving average and then hope that the index would fall back below the now broken resistance at 11050. If that happens then there is a chance we will see a sizeable move lower. But as things stand, it is the bulls who are in the driving seat. 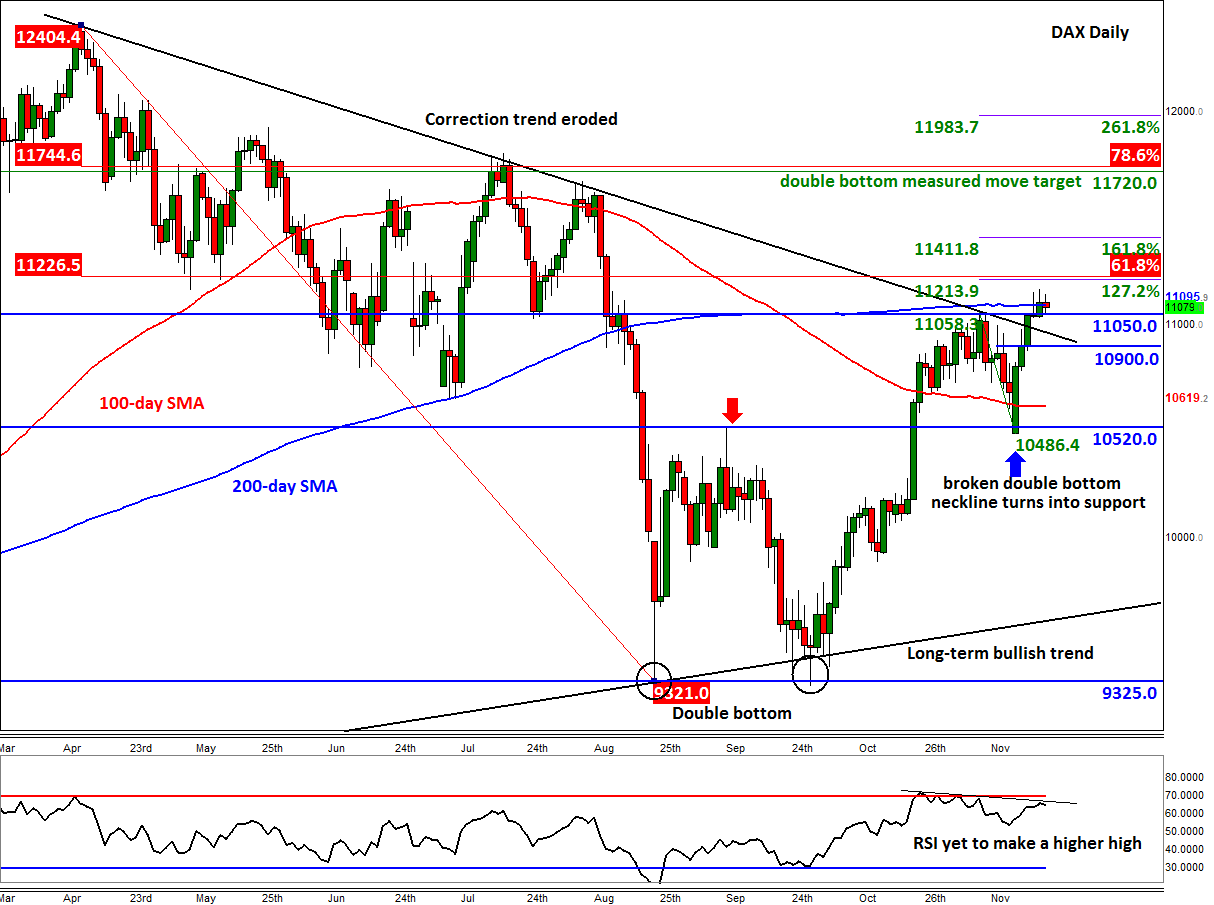