DAX surges on speculation ECB will surprise next week

It might be a data-void session and investors in the US are away for Thanksgiving holiday, but European stocks are again in a rally mode, following on from yesterday's strong gains. Evidently, traders are speculating that a beefed-up version of ECB QE is forthcoming in a week’s time, so they are buying benchmark government bonds, causing yields to fall further into the negative. The resulting lower yields and weaker euro is boosting the appeal of European stocks, especially of exporting companies. This is why, for example, shares in German carmakers are rallying today despite the recent emissions scandal from Volkswagen and the resulting huge fines and recalls for the company’s diesel vehicles. Indeed, South Korea has become the latest country to fine VW, slapping it with approximately $12.3 million in penalty and ordered a recall of more than 125,000 diesel cars.

But with the ECB’s much-anticipated meeting now just a week away, the market’s focus is on the macro rather than micro economics. Yesterday, Reuters reported details on the possible form of further easing from the central bank, citing unnamed officials. Apparently, Mario Draghi and co are considering various options, including buying more bonds and introducing a two-tier penalty charge on banks that park money at the ECB. If the report is correct, ECB’s policymakers are looking to do something, rather than nothing at all, next week. For yield-starved investors, this is apparently good enough a reason to buy stocks. The scope for disappointment is thus high now and in the event that the ECB fails to deliver what Mr Market wants then one would expect to see a big drop in stock prices: an unlikely event, in our view.

Thus, traders are apparently buying the rumour, probably in anticipation to sell the fact shortly after the ECB makes an announcement next Thursday. So, one needs to be wary of the possibility that stocks may actually ease shortly after the ECB potentially announces a beefed-up version of QE, since the focus will then turn immediately to the Fed which is expected to do the opposite and tighten its policy a little.

In other words, stocks could sharply extend their gains over the coming days before possibly retreating a little some time after the ECB meeting on Thursday.  Among the major European indices, the German DAX index is looking increasingly bullish. Since our last report on the DAX, the index has done almost exactly what we had been anticipating (for details see here and here). Now that it has cleared this week’s earlier highs of around 11160 and the 61.8% Fibonacci retracement of the drop from the record high around 11225, there is not much further resistance seen in the short-term, apart from the Fibonacci extension levels of the most recent downswing where we may see some profit-taking rather than any notable selling pressure. The 161.8% extension comes in at 11410 and this is now our first of the extended bullish targets. Beyond this, there are not much further resistances until the double bottom target and the 78.6% Fibonacci retracement level of the larger downswing around 11720/45. The path of least resistance is clearly to the upside and will likely remain that way for the next few days.  At this stage only a decisive break back below support at 11160 would invalidate this short-term bullish setup. 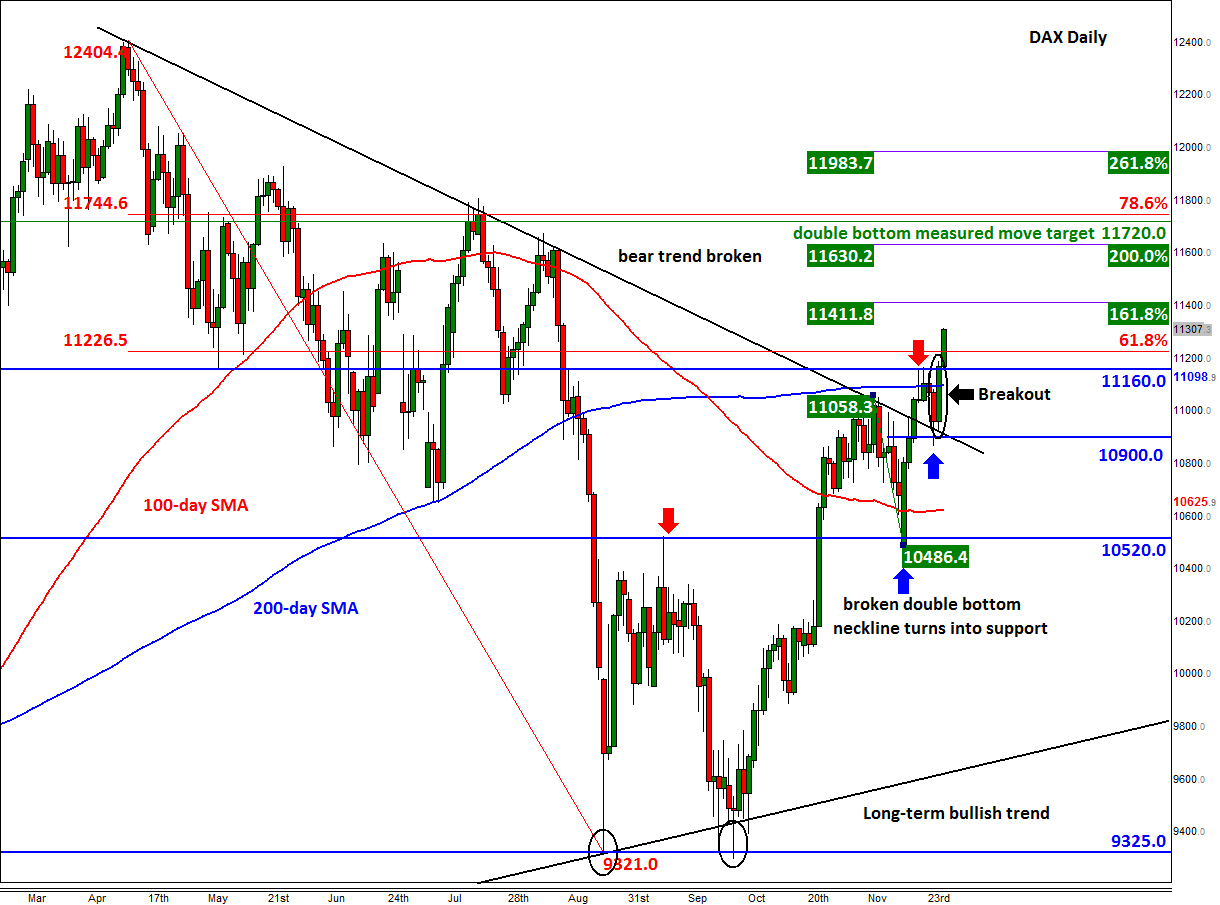