Understandably, it has been a very slow day in FX markets due to the Thanksgiving holiday in the US and the lack of any major economic data elsewhere. That being said, there have been sharp moves in some selected markets such as the Turkish Lira, which extended its decline for the fourth consecutive day after Russia imposed restrictions on food imports from Turkey in retaliation over downing of its fighter jet. Elsewhere, commodities have had a mixed day while the stock markets have had a solid one due to growing speculation that the ECB will announce a more beefed-up version of its bond-buying programme on Thursday of next week.

Indeed, next week will be a very important one for the financial markets. As well as the ECB meeting, we will have rate decisions from the RBA and BOC, while on the data front we will have, among other things and in no particular order, the latest Chinese manufacturing PMIs; Australia’s mid-year Economic and Fiscal Outlook, third quarter GDP and monthly retail sales figures; UK and US services PMIs; the OPEC meeting and of course the US monthly jobs report. So, there’s something for everyone next week and volatility should be very high.

But in the immediate term, traders will have some important data to digest form Japan and the UK on Friday. In fact, the Japanese figures, which include household spending, unemployment rate and Tokyo and national core CPIs, will be released at 23:30 tonight if you follow the GMT time. From the UK, we will have the second estimate of the third quarter GDP at 09:30 GMT Friday morning, along with the preliminary Business Investment and Index of Services.

The combination of the Japanese and UK data naturally draws our attention to the GBP/JPY currency pair, which does tend to be quite volatile and generally follow the trend of the stock markets. But today it is trading lower despite the sharp rally in European markets, though it has bounced off the lows. Part of the reason why the GBP/JPY has decoupled from the stocks markets is because investors have been pushing out their expectations about the Bank of England’s first rate increase following some dovish talk from several MPC members, including Governor Mark Carney. But the long-term trend for the pound continues to remain bullish and if it were to shine once more, it would more likely do so against a weaker currency like the Japanese yen or the euro, where both central banks are still dovish.

Tuning our attention to the chart now and there are several factors that we need to take into consideration ahead of the upcoming data from both regions. First and foremost, there is a bullish trend line in place which has been established since October of 2014. As the latest sell-off has stalled ahead of this trend line, there is the possibility that we will see some further weakness in the short-term before it stages a potential rally. Interesting price behaviour to observe is the fact that the most recent rally has stalled around the 50% retracement of the drop from the May high, while the most recent sell-off has likewise stalled around the 50% retracement of the upswing from the September low. What’s more, the GBP/JPY is currently stuck between the 50 and 200 day moving averages. Neither the bulls nor the bears are in full control at this stage, in other words.

On Wednesday, the GBP/JPY formed a so-called inside-bar candlestick pattern, whereby the day’s ranges were formed inside of the previous day’s ranges. A similar price pattern is being displayed today, though this is subject to change as the session is not yet over. The interpretation of price action over the past two days is that volatility is narrowing, which is not a major surprise and especially since we have important data from both the UK and Japan coming up.  The good news is that these sorts of price behaviours often lead to significant moves in the direction of the breakout, which invariably depend on some fundamental event. The bad news is that, at this stage, it is almost impossible to say with a high degree of confidence which direction the break will occur, although given the recent sharp falls inside what essentially is a long-term upward trend, I wouldn’t be surprised if it breaks to the upside. Normally we would wait for a break outside of the previous day’s ranges but on this occasion we are looking for a break of key resistance at 186.00/25 or support around 184.25/50. A break outside of this range could lead to a sharp move in that direction, at least towards the corresponding trend lines that are shown on the chart. 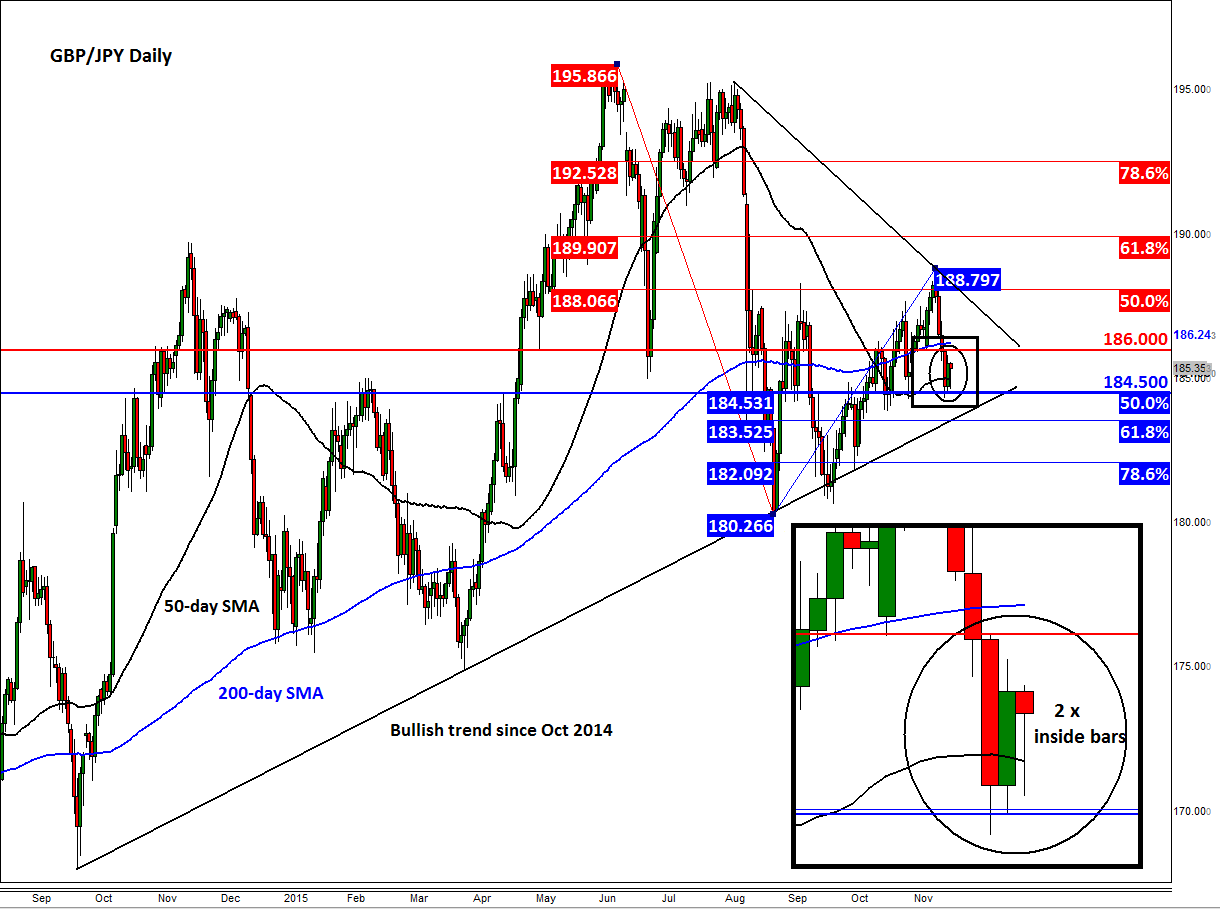