GBP/JPY resumed its freefall on Tuesday by dropping below 164.00 once again, as the pound fell sharply against most major currencies and the yen rallied on a tentative return of risk aversion.

One of the catalysts of this lowering of risk appetite and resumed flight towards the safe haven yen was crude oil’s downside reversal on Tuesday. This occurred after the announcement of a potential deal to freeze crude output by Saudi Arabia, Russia and others, was largely seen as a weak stopgap proposal that would be ineffective in its aim to curb a massive oversupply situation. While equity markets were still able to rally moderately, crude oil prices plunged once again, paring much of the gains made from late last week to early this week.

The British pound’s continued fall has been prompted primarily by an increasingly dovish Bank of England that was previously expected to begin its own monetary tightening cycle at some point following the initiation of the US Federal Reserve’s rate hike in December. These expectations have since diminished dramatically, and even reversed to accommodate the potential for a rate cut, given recent concerns over economic growth, financial market stability, and low inflation.

The combination of this pressure on the pound due to interest rate expectations and a Japanese yen propped up by continued fear and volatility in global markets, has weighed heavily on the GBP/JPY currency pair. Late last week saw a drop down to multi-year lows and major psychological support around the 160.00 level after more than a week of precipitous falling. Despite the fact that the currency pair rebounded soon after dropping to 160.00, current price action is beginning to point towards those lows once more.

With any continued equity market and crude oil volatility that sustains a “risk off” market sentiment, further yen buying could result. When coupled with a persistently pressured British pound, this could lead to a further GBP/JPY breakdown below the noted 160.00 support. In this event, which would confirm a continuation of the current downtrend, the next major downside targets are at the 156.50 and then 154.00 support levels. 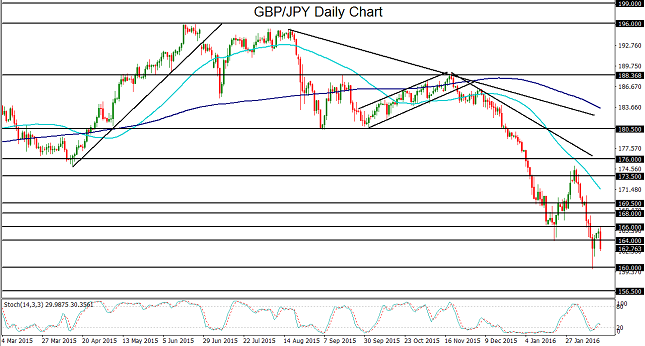