Sterling has rebounded against other major currencies for the first half of this week as a relief rally for the UK’s embattled currency has followed sharp plunges for the past two weeks.

Contributing to the recent precipitous fall and continuing downtrend for GBP/USD has been a combination of: concerns over a UK exit from the European Union, a consistently dovish Bank of England, and positive economic data surprises coming out of the US.

An exit from the EU by the UK, or “Brexit,” has become an increasingly viable possibility, with a referendum vote scheduled for late June in the UK. The impact of such a separation on the UK economy and its currency could potentially be severe and far-reaching, and the prospect of an affirmative vote should continue to weigh on sterling during the run-up to the referendum.

Also pressuring the pound has been the shifting policy stance of the Bank of England, which has progressively moved away from previous intentions of raising interest rates in the foreseeable future. This shift has occurred over the past few months in the face of lagging economic growth, low inflation, and financial market instability.

On the dollar side of the GBP/USD currency pair, recent economic data out of the US has been unexpectedly positive overall – from last week’s durable goods orders to Friday’s quarterly GDP reading to Tuesday’s manufacturing data. Any continuation of positive economic surprises in the US has the potential to push the Federal Reserve closer to implementing additional interest rate hikes going forward. One of the most pivotal data releases occurs this coming Friday – the non-farm payrolls employment report for February. Any reading significantly above the consensus expectation of 195,000 jobs added could likely have a significant impact on boosting the dollar and further pressuring GBP/USD. As a precursor to this government employment report, Wednesday’s ADP private sector employment report for February came out significantly better than expected at 214,000 jobs added against expectations of 185,000.

Despite the relief rebound for GBP/USD thus far this week, the potential challenges weighing on the currency pair could likely be substantial. Further pressure on the pound and support for the dollar could push GBP/USD down to new long-term lows. Prior to the current rebound, the currency pair hit a new 7-year low at 1.3835 on Monday. Since that low, it has risen back above the 1.4000 psychological support/resistance level. While a further rebound back up towards the 1.4250 resistance area is certainly possible, the outlook for GBP/USD remains significantly bearish in line with its prevailing downtrend. With any sustained re-break below the noted 1.4000 level, the next major downside target remains at the key 1.3500 support level, last hit in early 2009. 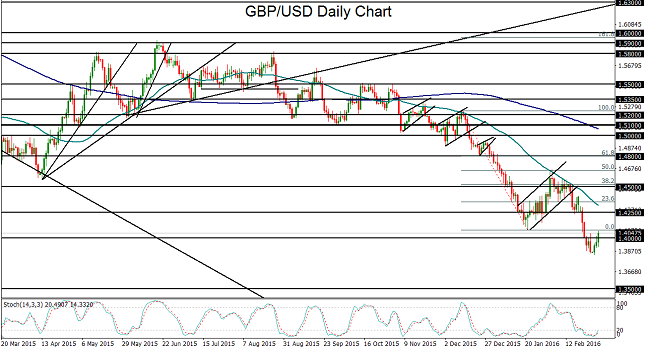