After a weaker start, European equity markets managed to bounce back by midday here in London as oil prices remained elevated after their sharp recent gains. Earlier, Chinese growth concerns had made an unwelcome return, dampening the mood lifted by the recent rally in commodities and hopes of more central bank support from the likes of the PBOC and ECB. At mid-day in London, Britain’s FTSE 100 was still down 0.8 per cent while the German DAX had trimmed its losses to about 1 per cent.

This morning, sentiment was hurt by news of a 25.4% drop in Chinese exports, its worst since 2009. Imports were also down, falling 13.8% year-on-year. Though this was an improvement from January’s 18.8% drop, they were still weaker than expected. Last week, China's manufacturing PMI came in at its lowest level since November 2011.

It is important to note however that the trade figures may well have been affected by the Chinese New Year, which fell earlier in February this year. Nevertheless the slump does ring alarm bells about the pace of the slowdown at the world’s second largest economy. If the trend of weaker data continues, then the Chinese government's own full year growth target range of 6.5 to 7.0 per cent will start to look ambitious.

But it is not all doom and gloom out there. German factories have actually surprised with a 3.3% jump in production in January. Not only was this much stronger than expected, it is also the biggest increase since September 2009. However, given the fact that German factories have reported a 0.1% drop in new orders in January, as we found out yesterday, production may well be weaker in the coming months.

Stocks could find support from crude oil, should the black stuff extend its rally now that some key resistance levels have broken down. On top of this, the ECB could expand its QE programme on Thursday in an effort to boost growth and inflation. If seen, stocks could rally sharply. Ahead of the ECB meeting we may see some more side-ways price action in both stocks and the euro.

On a micro level, commodity stocks were unsurprisingly taking the brunt of this morning’s sell off with Anglo American down 7.5 per cent. The FTSE’s worst performer was actually Worldpay, down more than eight per cent after its full year results missed analysts’ forecasts.  On the up side, Burberry shares have been lifted by takeover talks. The fashion chain's shares were nearly 6% higher on news that a ‘mystery investor’ has been quietly snapping up its shares.

The FTSE’s recent breakout above a bearish trend was meant to signal that the buyers are in control and that further sharp follow-up gains were on the way. But so far, the bulls have shown little desire to bid up the market at these relatively elevated levels. But so long as the previous resistance at 6130 holds as support then they won’t be too worried. In fact, a short term pullback is maybe what’s needed in order for the momentum indicators to unwind and move further away from “overbought” levels on smaller time frames. But on the daily time frame, the RSI has not even reached the lower band of its extreme condition at 70, suggesting that further bullish momentum may still be there for UK stocks. The slow stochastics however has reached its own overbought level, so it may need to unwind a little for those who follow this indicator to step back in.

While 6130 holds as support (on a daily closing basis), a rally towards the 200-day average at 6290 is likely. Above the moving average, the next bullish target is around 6450-6505, an area which corresponds with previous support and resistance, and the 61.8% Fibonacci retracement. Meanwhile a closing break below 6130 would end the short-term bullish bias and may lead to a drop towards the next support zone in the 6000-6030 region. 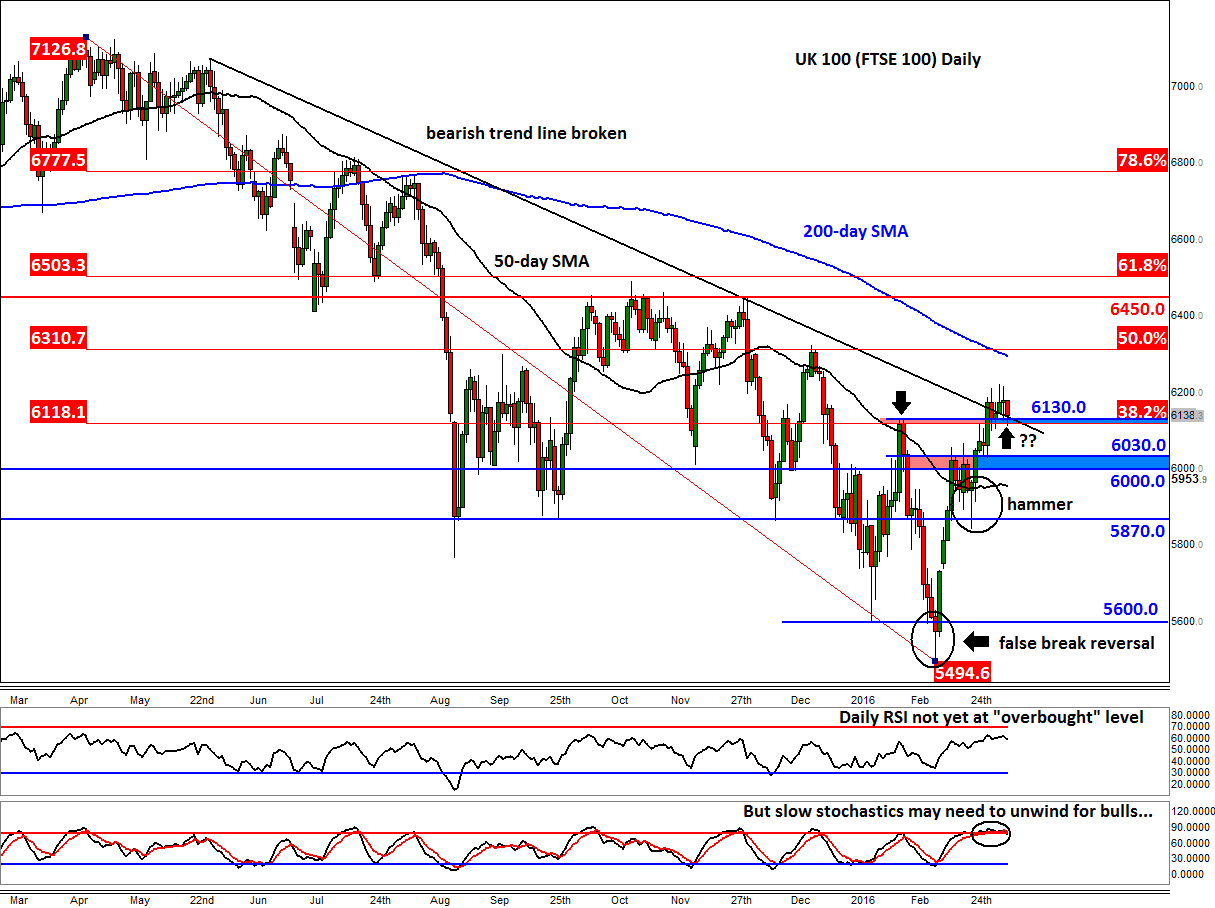