European stock markets are trading lower at the time of this writing. Sentiment has been hurt by the weaker oil and commodity prices which have weighed heavily on miners. In addition, the inaction by the Bank of Japan overnight has encouraged speculators to book some profit on their long positions opened post the ECB’s decision to expand QE last Thursday. It is also likely that some traders are simply sitting on their hands as they await the FOMC policy statement and Janet Yellen’s press conference on Wednesday. The Fed is highly unlikely to cut interest rates at this meeting, but the market is wary of potentially hawkish remarks that would suggest a June rate rise is firmly back on the table. This scenario would probably cause US markets to fall, at least initially anyway. But in the event that the Fed sounds more dovish than expected, stocks are likely to stage a relief rally.

Until Wednesday evening it could be a long wait, therefore. But this could just be a pause for breath in the rally as the major indices test key levels. Yesterday, for example, we highlighted the fact that that the Dow and S&P 500 had both crossed above their respective 200-day moving averages for the first time this year and that the tech-heavy Nasdaq 100 was not too far off its own 200-day average. In Europe, the FTSE has recently broken above its bearish trend line, yet it hasn’t enjoyed much follow-through in buying momentum thus far. And now the German DAX seems to have stalled at a key level around 10,000. The underlying trends all appear to be bullish but the lack of follow-through is something that is discouraging some momentum traders in particular.

But at these technically-important levels, what the indices do next could determine the direction for the next several days at the very least. In the case of the DAX, the 10,000 hurdle is very important and there are a number of factors to consider here. I think an eventual breakout, which is my base case, would be a rather bullish outcome. Let me explain.

First and foremost, the area around 10,000 corresponds with the underside of a long-term broken bullish trend line, which in itself makes it a key resistance level. In addition, this is a psychologically-important level and for many short term bullish speculators it was probably one of their main targets. Added to this, the high that was hit on Thursday – post the ECB announcement of more QE – was just below this 10,000 level.

Thus, a decisive break above 10,000, if seen, would suggest that the net effect of ECB’s policy decision was bullish for stocks. In other words, it would confirm the consensus view that traders are still happy to go long stocks amid the on-going currency devaluation from central banks. Consequently, it may lead to further follow-up technical buying, which could see the DAX sharply extend its rally.

Equally important would be if the DAX falters here. If seen, this would indicate a significant change in market psyche. Already, we have seen this kind of a reaction from the Nikkei index post the Bank of Japan’s decision to cut rates into the negative earlier this year. If central banks’ actions are failing to underpin the markets then things could get really ugly once more.

If it breaks to the upside, then an initial rally to previous resistance at 10165 would become highly likely. Other potential bullish targets could be the first of the two bearish trend lines, which resides somewhere in-between 10165 and the 61.8% Fibonacci retracement level at 10385. Above this Fibonacci level is the 200 day moving average, currently at 10440.

However, if the DAX breaks below 9900 then this would be a bearish outcome, at least in the short-term anyway. In this potential scenario, a pullback towards the 50-day moving average at 9565/70 area would not surprise me. The key support area is between 9300-9400 as highlighted in the chart. For the long-term trend to turn bearish again, it would have to break through this region. Until and unless that happens, any pullback should be seen as a counter-trend move following the formation of the false break reversal pattern beneath 9300. 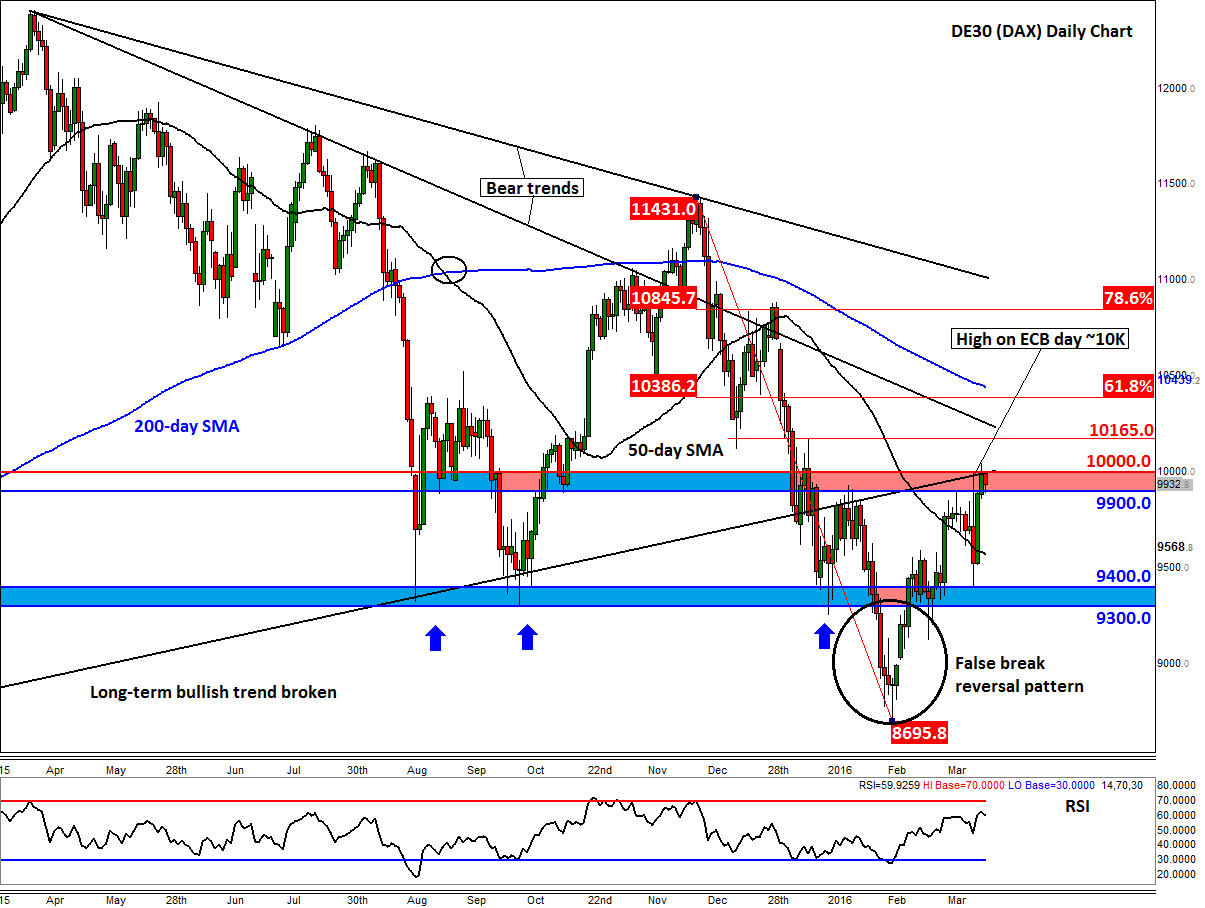