AUD/USD pulls back from key 0.7500 level as US dollar rebounds

AUD/USD made an abrupt downside reversal early Thursday as the US dollar rebounded after having slid sharply since the release of dismal US employment data last Friday. This rebound for the greenback occurred amidst a general risk-off market environment, and was also helped by the release of better-than-expected weekly jobless data revealing 264,000 unemployment claims last week vs an expected 270,000.

Prior to Thursday, AUD/USD had been rising in a sharp incline partly due to US dollar weakness after US Non-Farm Payrolls (NFP) data for May came out much worse-than expected at 38,000 vs 160,000 expected. In turn, this data prompted a more dovish tone from Federal Reserve Chair Janet Yellen in a speech early this week. The drop in the US dollar resulting from the disappointing NFP data and its Fed implications led to a sharp AUD/USD rebound from the 0.7200 area, where the currency pair had been trading in consolidation.

On the Australian dollar side of the currency pair, the Reserve Bank of Australia kept interest rates unchanged earlier this week after last week’s release of unexpectedly stronger GDP data for the first quarter. This led to a further boost for the Australian dollar that contrasted with its sharp slide last month when the central bank cut its benchmark interest rate to the current record low of 1.75%.

From a technical perspective, this recent Australian dollar strength and the NFP-driven weakness in the US dollar prompted an AUD/USD surge to major resistance around the 0.7500 psychological level, which is also around the 50% retracement level of the slide from April’s 0.7833 high down to May’s 0.7143 low. As noted, the currency pair turned down from that resistance on Thursday as the US dollar rebounded and pared some of its losses from the past few days. In the process, AUD/USD has dropped back down below its 50-day moving average, placing it at a critical juncture.

In the event that the US dollar resumes its recent fall due to a continued decline in expectations for a near-term Fed rate hike, a decisive breakout above the noted 0.7500 resistance level could open the way for a rise back up towards the 0.7700 and 0.7800 resistance objectives. To the downside, if 0.7500 continues to hold, any further AUD/USD retreat could prompt a move back down to the noted 0.7200 consolidation area. 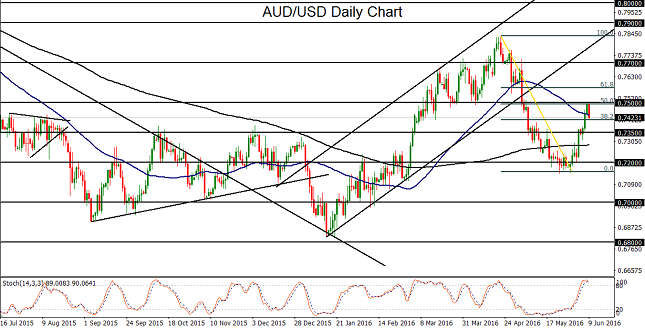