An impressive UK PMI of 55.5 offered a welcome boost to the Sterling bulls in Monday’s European session. With this latest PMI hitting a 16 week high, some fears may have been erased regarding the potential slowdown in economic momentum within the UK economy. Despite the astronomically low probability that the Bank of England (BoE) will hike UK rates in November, there may be a possibility that another MPC member will side with Ian McCafferty in voting for an interest rate rise on Thursday. As expectations grow that Q4 GDP for the UK may exceed expectations, sentiment for the GBP may slowly drift to the side of the bulls. The GBPUSD which is already technically bullish on the daily timeframe may break the 1.5500 resistance, with additional GBP strength inviting a further incline to the next relevant resistance at 1.5600.

Asian stocks received a dent in Monday’s Asian trading session as a tepid China PMI of 49.8 renewed concerns about the pace of growth of the Chinese economy. This has been the third straight month of a contraction in China’s manufacturing sector despite the Chinese government's use of aggressive monetary policy to jumpstart this ailing economy. Most Asian equities have concluded in the red territory, with the depressed Shanghai Composite Index closing -1.70% lower. Sentiment remains bearish for the China markets and this may be reflected as market participants digest the fact that growth targets in China’s next five year plan may be played down to approximately 6.5%.

Gold has experienced a sharp change of direction in less than a week as Fed hawks continue to threaten Gold bulls. The hawkish FOMC statement which has reinvigorated the hopes of a US rate hike in 2015 has left Gold vulnerable and open to losses. As the USD continues to appreciate, this may translate to more downwards pressure on this yellow metal. The technical indicators have been slightly skewed but on the daily timeframe Gold has become bearish with the next relevant support based at 1120.0. Friday’s NFP will play a heavy role in the direction for this precious metal, and may act either as a lifeline for the bulls, or simply additional fuel for the bears.

The EURUSD is technically bearish on the daily timeframe. Prices are trading below the daily 20 SMA and the MACD has crossed to the downside. As long as prices can keep below the 1.1100 resistance, there may decline to the next relevant support at 1.0850. The GBPUSD is technically bullish on the daily timeframe. Prices are trading above the daily 20 SMA and the MACD has crossed to the upside. A breakout above the 1.5500 resistance may open a path to the next relevant resistance at 1.5600. If prices decline back below the 1.5400 support, this may suggest bullish weakness. The USDCHF is technically bullish on the daily timeframe. Prices hit the 0.9900 resistance which was discussed last week. If prices stabilize above the 0.9900 level, this may invite an opportunity for an incline to the next relevant support at 1.0085. The AUDUSD is technically bearish on the daily timeframe. Prices are trading below the daily 20 SMA and the MACD is in the process of crossing to the downside. As long as prices can keep below the 0.7280 resistance, there may be a decline to the next relevant support at 0.6900. 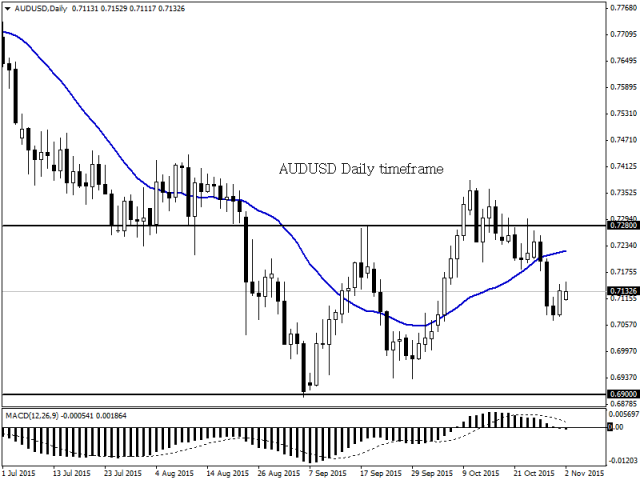