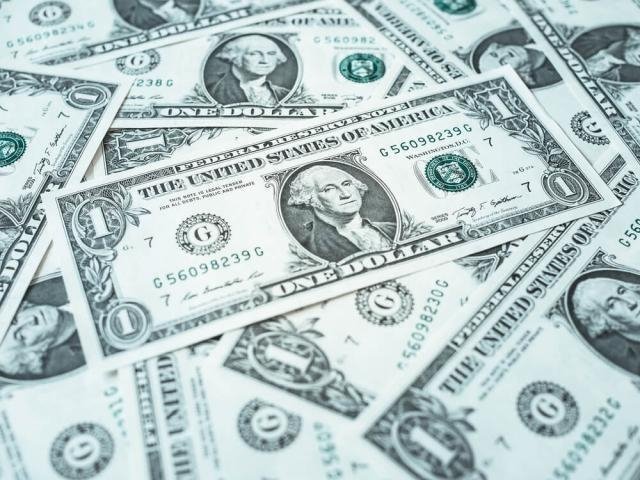 Global stocks descended deeper into the abyss in the first trading week of May following the tepid Chinese manufacturing data and slash in Europe’s growth outlook that renewed concerns about the health of the global economy. European equities were left depressed with the FTSE100 attracting most of the headline attention yesterday after the major index dropped to its lowest level in around three weeks. The bearish contagion from Europe encouraged investors to scatter away from riskier assets and this consequently punished American markets that also closed negative. With expectations rapidly diminishing over further central bank interventions by the BoJ, Asian markets could remain pressured for an extended period as an appreciating Yen weighs heavily on the Nikkei. Investors should keep in mind that confidence towards the global economy is strikingly low and with oil prices almost puppeteering the movements in the stock markets, further declines could be pending in the near term.

The elevated concerns over the health of the global economy complimented with the incessant declines in oil prices have soured investor risk appetite, consequently leaving the FTSE100 vulnerable to further losses. This index has been weighed down by a variety of different factors with this including: mining stocks being dragged lower, a resumption of concerns over economic momentum in China following factory activity shrinking in April, and an unexpected UK Manufacturing PMI contraction. These attributes combined have provided a foundation for bearish investors to install a heavy round of selling with prices edging towards 6150. From a technical standpoint, this index is under pressure on the daily timeframe. Prices are trading below the daily 20 SMA while the MACD has crossed to the downside. Previous support at 6200 could transform into a dynamic resistance that could open a path to 6150.

The dimming expectations over the Federal Reserve raising US rates in Q2 have provided a platform for bearish investors to ruthlessly attack the Dollar Index to levels not seen since January 2015, below 92.00. Sentiment is undeniably bearish towards the Dollar, and with domestic data in the United States pointing to further weakness in the economy, Dollar vulnerability could remain the dominant theme in the global currency markets. With the NFP looming this week, Dollar sensitivity could heighten as market participants ponder on the likelihood of a figure that exceeds expectations. With global developments constantly exposing the US economy to downside risks, it seems likely that a positive NFP may do little to boost optimism over another US rate hike in 2016.

All eyes should remain on the Dollar in May as the Dollar Index approaches a major support level that if breached below, could spell an even deeper correction lower for the Dollar. The potential for another period of extended weakness in the Dollar is technically looking strong at present from a technical and fundamental perspective. If even a positive NFP report leads to a sudden surge in expectations over a possible US rate hike, the fundamentals disagree and as such could provide a relief rally for bearish investors to exploit.

From a technical standpoint, the Dollar is bearish as there have been consistently lower lows and lower highs while the MACD also trades to the downside. If prices can breach the weekly support at 92.50 then the flood gates could be open for a steeper decline towards 90.00. 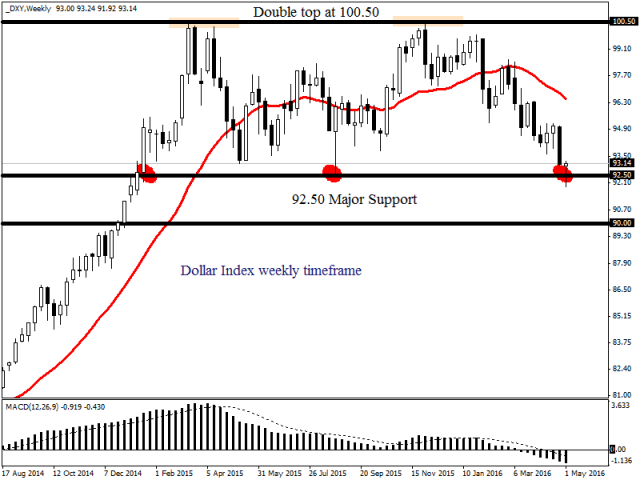 Investors were left bewildered last week following the Bank of Japan’s unexpected decision to leave monetary policy measures unchanged despite the economy wheezing for further central bank intervention. The disappointment from the BoJ’s inaction triggered a sharp appreciation in the Yen, which caused the USDJPY to plummet to 18-month lows. Falling commodity prices have left Japan under intense pressure while an appreciating Yen continues to erode the nation's export competitiveness, consequently rekindling fears of deflationary woes. Expectations are swiftly fading over further interventions by the BoJ and this could spell more gains for the Yen which may simply punish the nation that is already entangled in a losing battle with falling inflation. 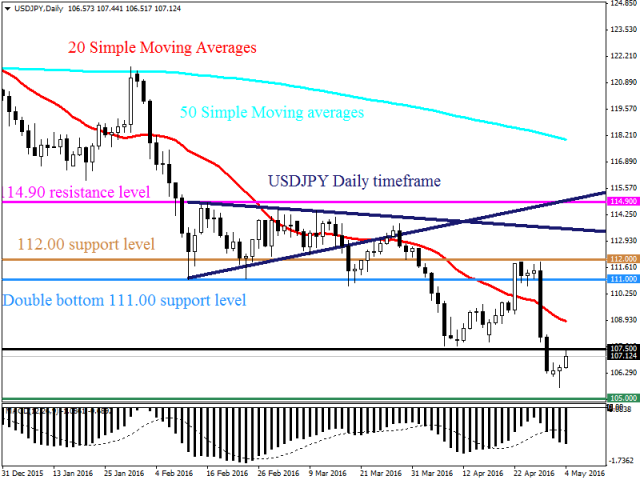 The Sterling/Dollar tumbled with force during trading on Tuesday after a poll which displayed the Brexit camp as leading renewed a wave of jitters that haunted investor attraction towards the Sterling. This decline was complimented with the unexpected contraction in the UK manufacturing PMI that rekindled fears over the health of the UK economy. With UK data repeatedly following a tepid path, expectations over the BoE hiking UK rates have declined considerably and such has offered a platform for bears to attack. Sentiment is heavily bearish towards the pound and prices could be poised to decline towards 1.44 if the 1.45 support is breached.

From a technical standpoint, the candlesticks are trading above the daily 20 SMA while the MACD has also crossed to the upside. Sterling bears simply need to exploit the window of weakness below 1.45 to reclaim some control under 1.44. 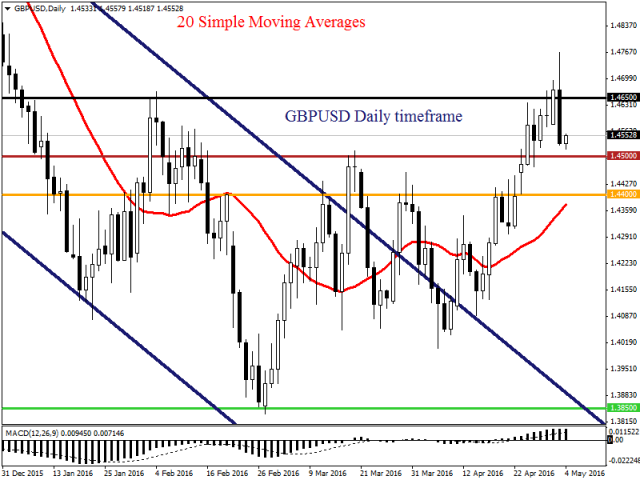 WTI Crude found resistance at $46.50 during trading this week as news dispersed of OPEC production output nearing record highs in April, which renewed fears over the excessive supply in the saturated markets. It is becoming increasingly clear that WTI is fundamentally bearish and with expectations rapidly retracting over any production cuts, bears could attack prices back towards $41.40.  While from a technical standpoint prices are bullish on the daily timeframe, bears only need a window of weakness to send this unstable tower crashing back down. If crude oil inventories have risen in today’s report then this could be the first catalyst needed for WTI crude bears to send prices lower.

From a technical standpoint, there have been consistently higher highs and higher lows while the MACD also trades to the upside. A breakdown below $44 could open the gates to $41.40 and potentially lower. While these short term gains are impressive, the fundamentals continue to signal to the downside and such should keep investors diligent. 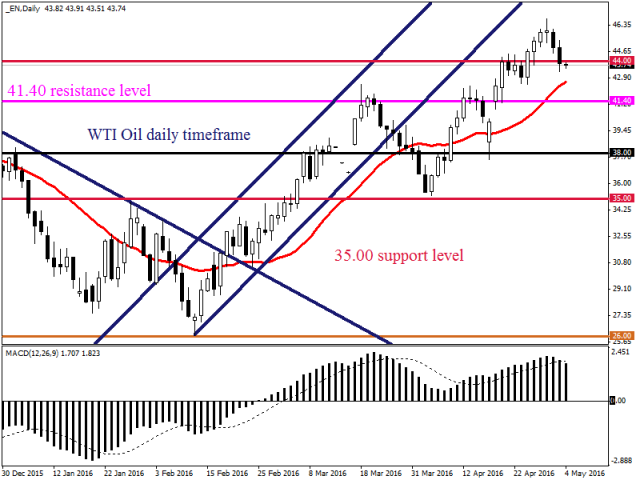 Gold edged closer to a major resistance around $1305 this trading week following the explosive mixture of Dollar weakness and steep declines in equity markets that boosted investor attraction to safe haven assets. We remain fundamentally bullish on Gold and Dollar weakness may provide a platform for bullish investors to install another heavy round of buying momentum. With concerns over slowing global growth and fading expectations over the Fed raising US rates in Q2 magnifying the metal’s allure, prices could be poised for further inclines. Although Gold has descended back towards $1280, this correction could provide a platform for bulls to send the metal back towards $1305 and potentially higher. From a technical standpoint, prices are trading above the daily 20 SMA while the MACD has crossed to the upside. Previous support at $1270 could encourage buyers to send Gold prices back towards $1305. 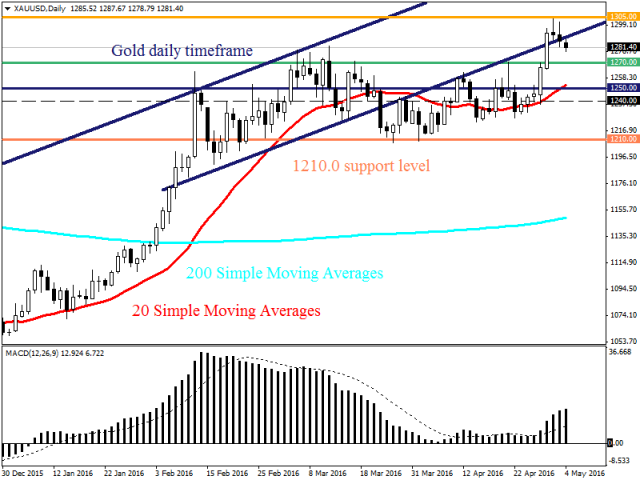