USD bounces after mixed jobs report in the U.S 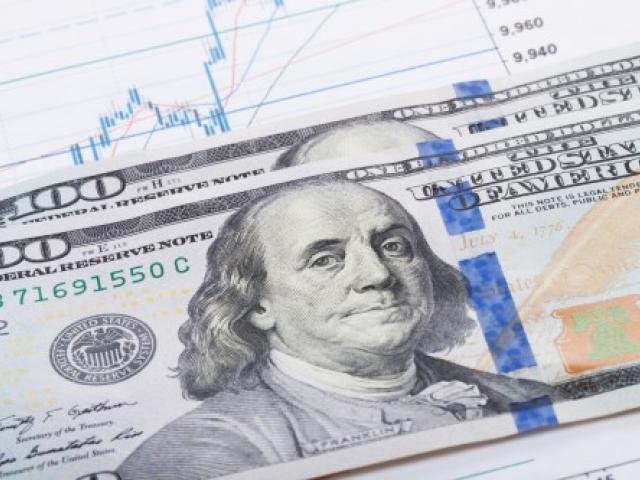 The U.S dollar managed to bounce off the lows after mixed jobs report in April. The U.S economy added only 160K new jobs compared to 200K expected, in the meantime, unemployment rate remain stable at 5.0% while the average hourly earnings over a yearly basis rose to 2.3% up from 2.2%.

Now let's have a look at the technical picture ahead of the weekly close.

The Euro continue to weaken despite a disappointing U.S jobs report in April.

The single currency rallied to reach 1.1480 level before to come down sharply as bears sold heavily the pair from this level as it represents the 61.8% Fibonacci retracement of the recent decline seen from 1.1615 peak.

Actually, we still believe that the pair is heading towards 1.1370 support from where we expect a bounce in the pair.

Looking at the daily chart, the trend remains bullish as far as 1.1217 low is in place but we are seeing a deeper correction in the single currency before the upside resume. 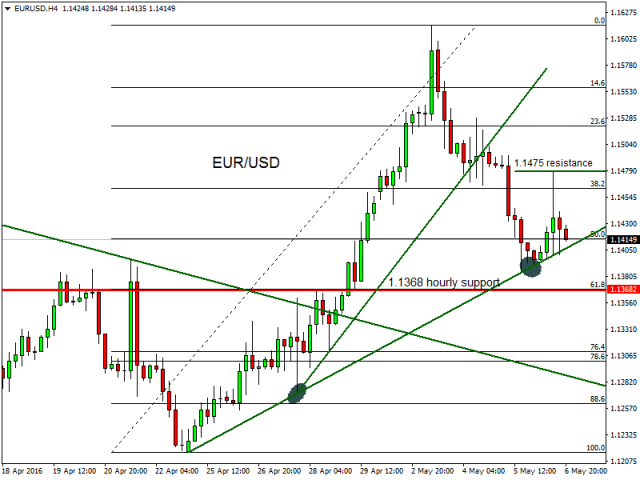 The British pound have tried to overtake 1.4542 hourly resistance but failed as the bearish momentum increased in this pair.

Moreover, prices dropped below yesterday’s low at 1.4445, which cleared the way for further decline in the direction of 1.4400-1.4380 support zone in the coming days.

In the meantime, and looking at the hourly chart, the trend remains bearish in the sterling as prices continue to respect the lower/highs-lower/lows structure seen from 1.4573 peak.

Therefore, we maintain our negative view in the near-term and only a break above 1.4573 will confirm the end of the current selling pressure. 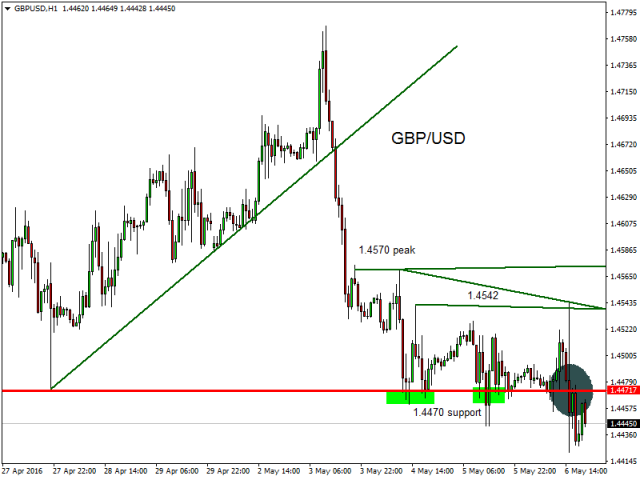 USD/CAD rally resumed as mentioned in our previous report as commodity currencies remain under pressure during this week.

Actually, we expect further gains in the pair as prices have confirmed a bullish reversal during yesterday. Consequently, the short-term trend turned bullish and as far as prices keep trading above 1.2783 low, another rally towards 1.2980 zone is likely, especially if the pair manage to close the week above 1.2880 area.

Regarding the near-term price action, 1.2950 is seen as a strong barrier in this pair while 1.2830 zone continue to support the pair in the hourly chart. 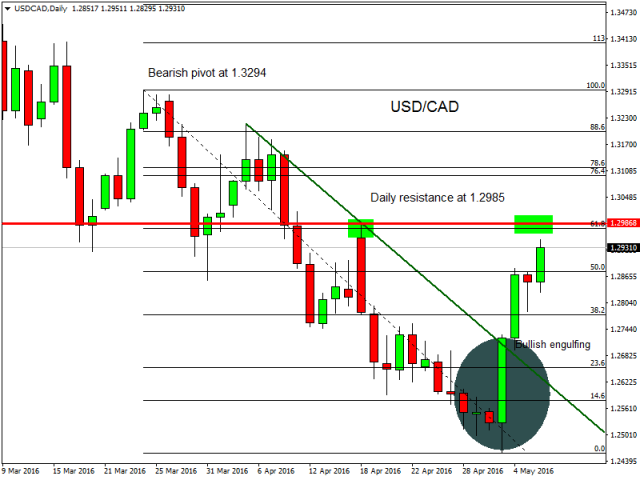 The Australian Dollar resumed the decline and fell below 0.7400 mark to confirm a negative signal in the daily chart.

As of now, we are looking for a stabilization in this pair as prices retraced 50% of the entire rally from 0.6823 low, which stands around 0.7335 level. However, the pair is likely to remain under pressure as far as prices continue to trade below 0.7400 zone. 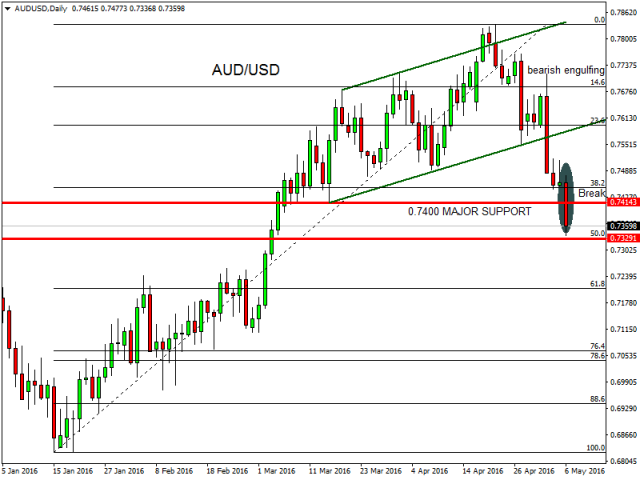 The pair traded lower following the release of the U.S figures and plunged to reach as low as 106.43 level before to bounce back strongly above 107.00 handle.

Technically, traders should be aware that the pair has showed some signs of recovery in the near-term and as far as 106.25 low is in place, another leg higher towards 107.50 critical resistance is likely during the beginning of next week.

In extension, a daily close above 107.50 will confirm a larger correction to the upside in this pair. 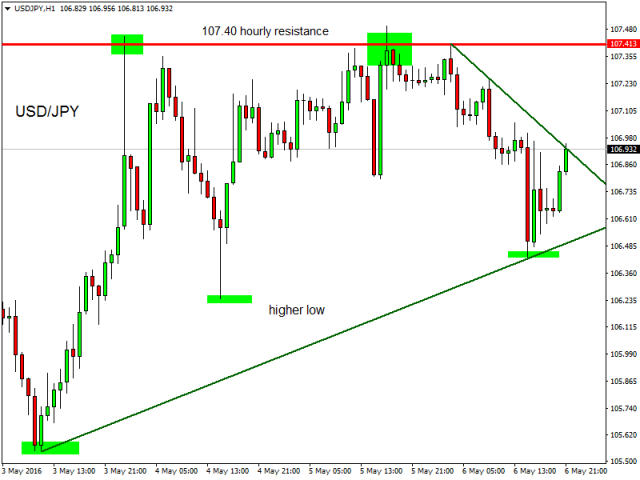 The kiwi declined further after breaking below 0.6870 hourly support and by now our view turned bearish in this pair.

However, it is important to note that the trend remains steady in the daily time frame as far as 0.6760 low is in place. In the short-term, all eyes should be turned on 0.6800 psychological support during next week as a break below it will trigger a big sell-off in the pair.

In the other side, any rally attempt is likely to stall below 0.6920 peak. 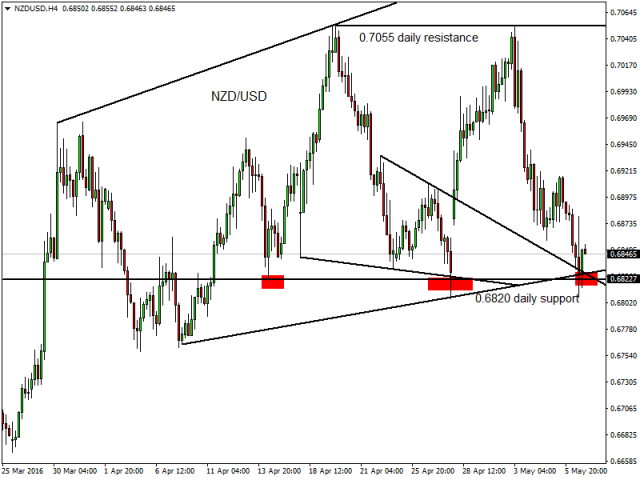 Gold held the hourly support level located at 1271$ per ounce as shown in our technical report of yesterday.

In addition, prices succeeded to break above 1286-1289 resistance zone and has printed fresh session highs at 1295.50, reinforcing the bullish outlook.

Technically, as far as this level holds, the downside potential is likely to remain limited in gold and prices may continue to trade sideways to higher as per the dominant trend.

Finally, the outlook remains positive in the yellow metal as prices continue to preserve the higher lows structure that began from 1208 low and only a daily close below 1271 support can clear the way for another leg lower that can reach 1263-1258 zone before to see a strong bounce again. 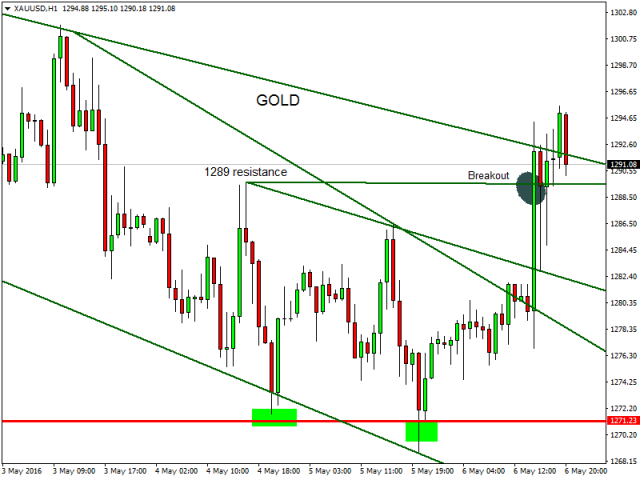