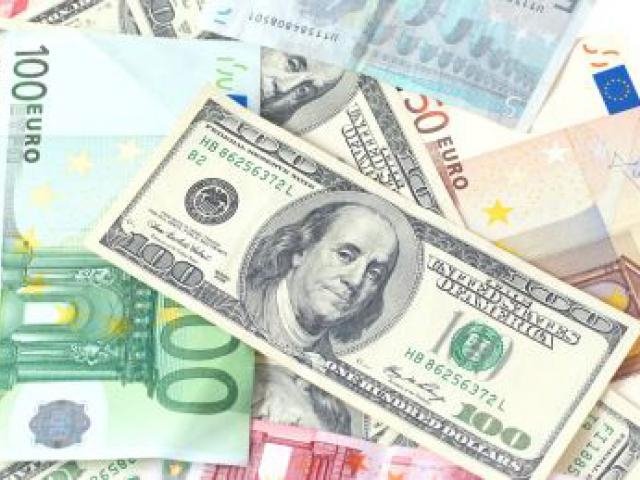 The Euro bounced strongly from the daily support zone of 1.1125/45 during last Friday as the bullish trend has resumed.

Looking at the technical picture, the pair continue to print higher lows from 1.0520 monthly support, which keeps the bullish reversal scenario possible over the medium term.

As of this week, a continuation of the recent uptrend is likely and traders should focus on 1.1420/50 resistance zone from where we can see strong sellers. 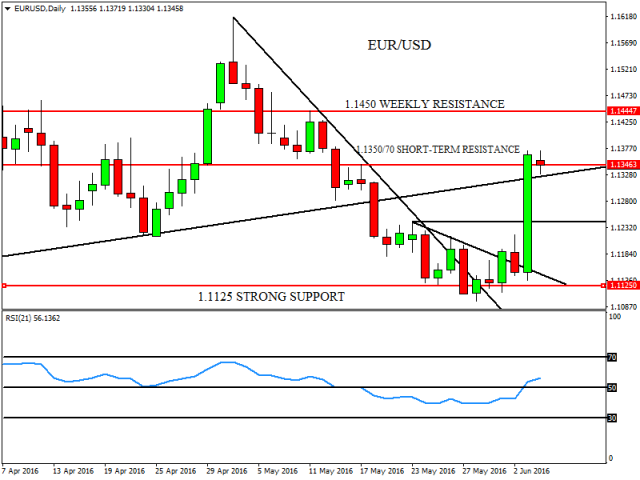 The Sterling keep trading sideways in the near-term and we expect further choppiness in this pair as we are only few weeks away from the U.K referendum day.

In the daily chart, the pound is trading inside a consolidation triangle and it is preferable to wait for prices to exit this sideways pattern before to confirm the next directional move in this pair. 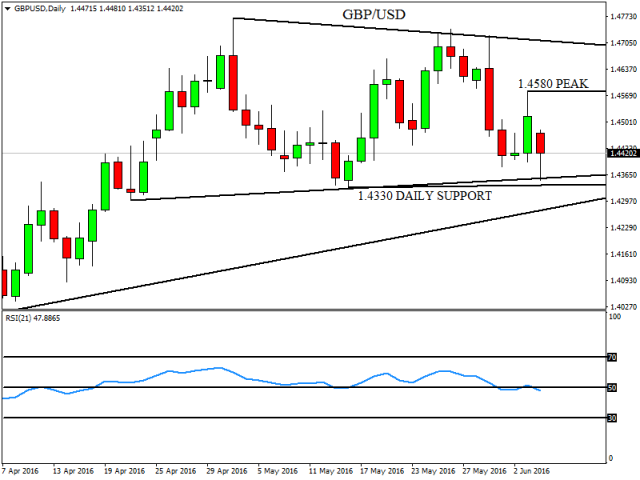 USD/CAD was sharply rejected from 1.3150/90 resistance zone during last Friday, and ended the week below 1.3000 handle which may clear the way for a re-test of 1.2900 daily support.

Looking at the recent price action, the pair turned bearish in the hourly chart and we believe that the upside potential is likely to remain limited below 1.3010/1.3030 resistance zone.

In the flipside, only a break above 1.3100 psychological barrier will weaken this negative outlook. 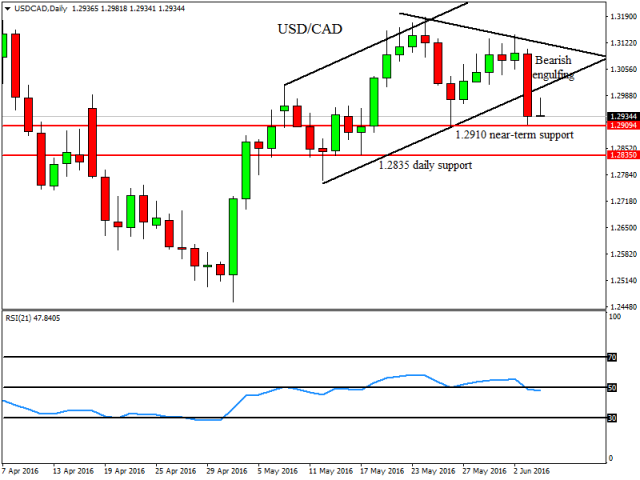 The kiwi succeeded to preserve 0.6660 weekly support and managed to rally strongly after breaking above 0.6840resistance zone

Actually, traders should focus on 0.6960 hourly resistance, as a break above it is likely to expose 0.7050 peak. Conversely, if the pair correct lower in the beginning of the week then we expect buyers to appear around 0.6880/40 support zone.

Technically, the pair remain positive and should continue to trade higher in the short-term unless we see a daily close below 0.6840 support. 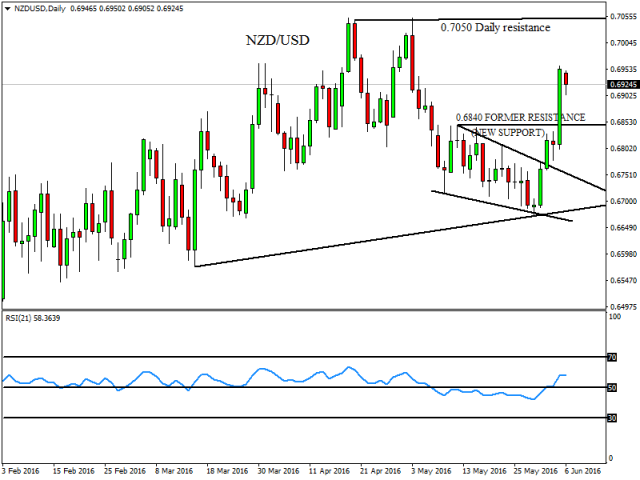 The yellow metal fell to 1200$ psychological support before to find strong demand by the end of last week.

Technically, all eyes was turned on 1205 weekly support, and despite that we have seen marginal lows in gold, prices succeeded to bounce strongly, which kept this support intact.

Therefore, the yellow metal remain positive in the daily chart and bulls may continue to push prices higher in the direction of 1252-1264 resistance zone in the following days.

In the other side, 1238$ per ounce represents the hourly bullish pivot and prices should remain well supported above this level. 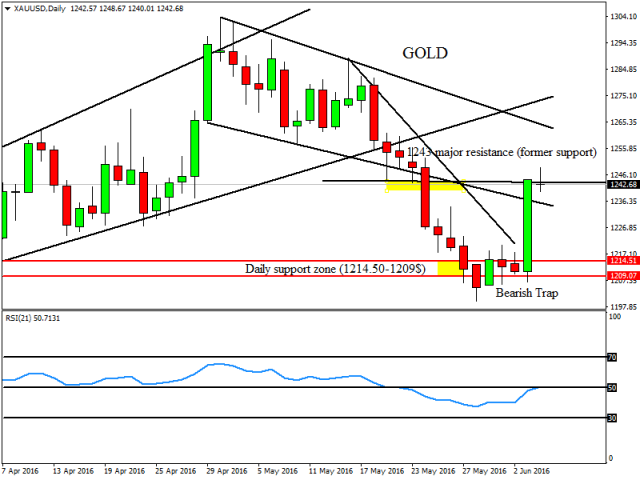 The Australian Dollar recovered from its weekly lows after the double bottom pattern seen from 0.7140 level was validated. The pair broke above 0.7260 hourly resistance to reach the next resistance zone located around 0.7370 area and from where we can see some sellers in the next hours.

Therefore, we will focus on this resistance level in the near-term, and a daily close above it will trigger another rally in the direction of the weekly resistance of 0.7420. 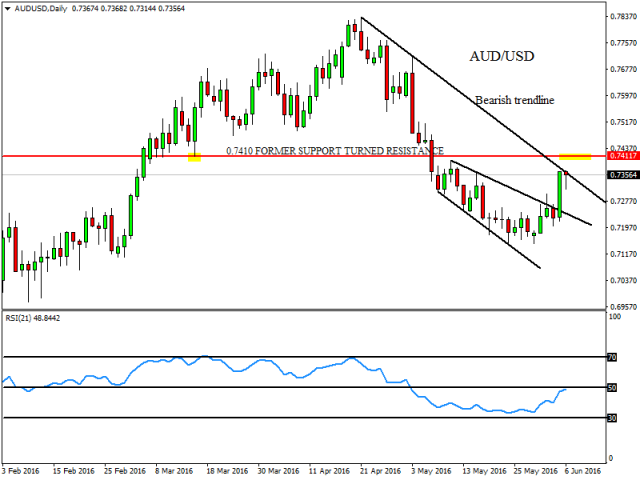 The pair sold-off sharply around 111.45 resistance level, which coincide with the 61.8% Fibonacci retracement of the last decline from 114.85 peak.

The drop was fueled by the aggressive shift to safe haven assets during last Friday after the recent jobs report from the U.S has pushed investors to re-adjust their forecasts regarding FED’s June rate hike.

As of now, the pair is likely to extend its losses towards 106.40 level followed by 105.50 weekly support before to see some stabilization in the near-term.

However, the sentiment remains heavily bearish and a break below the yearly low cannot be ruled out in the next days, which may clear the path for a test of the psychological support located at 105.00 level. 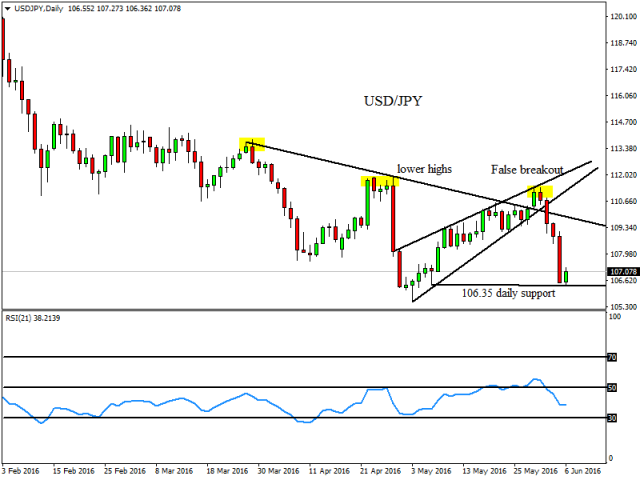