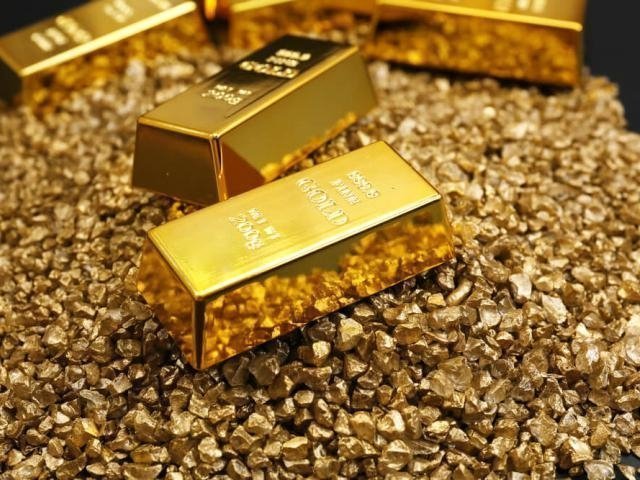 Gold surged ferociously during trading last week with prices hitting fresh two week highs at $1248 following the remarkably weak NFP report that immediately quelled expectations over the Fed raising US rates in June or July. For an extended period this yellow metal has been under the mercy of mounting US rate hike expectations, but with optimism rapidly fading over any action taken by the Fed anytime soon, buyers have been provided a solid foundation to attack. Although Gold still remains fundamentally bearish, this temporary lifeline offered to the bulls should propel the precious metal towards $1250 and potentially higher. With the Dollar set to weaken further as hopes fade over any action taken by the Fed till Q3, Gold bulls could exploit this opportunity to keep prices buoyed above $1200.

From a technical standpoint, prices need to break above $1250 for a potential incline higher towards $1260. Investors should keep in mind that the ongoing Brexit woes and concerns over the global economy could trigger a wave of risk aversion, consequently boosting Gold’s allure once again. If $1250 proves too resilient for the bulls, then bears may seize this opportunity to drag Gold prices lower. 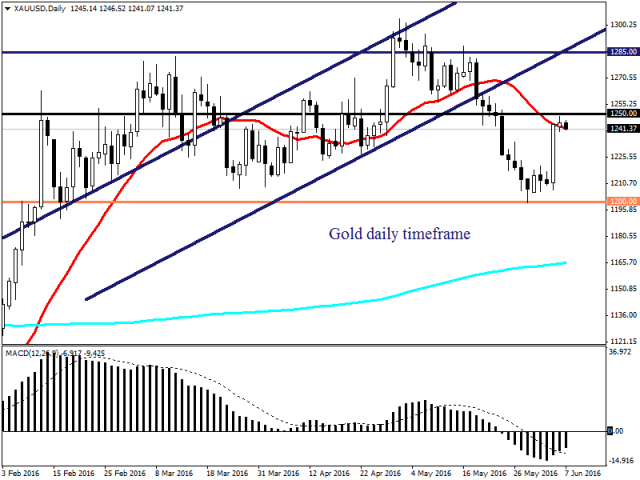 The rapidly diminishing expectations over the Federal Reserve raising US rates in Q2 has offered the Dollar bears enough inspiration to send the Dollar Index below 94.00. This Index has turned bearish in the blink of an eye and may be poised to decline lower if Q2 concludes without any action taken by the central bank. Although bears may be commended on their ability to sending the Dollar lower, it should be kept in mind that domestic data has followed a positive path while sentiment towards the US economy remains bullish. If the next NFP report for June displays signs of improvements then a rate hike in September could be a live possibility.

From a technical standpoint, the Dollar Index fulfills the perquisites of a bearish trend and prices could trade lower towards 93.00. The candlesticks are below the daily 20 SMA while the MACD is also in the process of trading to the downside. Previous support at 94.00 could transform into a dynamic resistance for a decline towards 93.00. 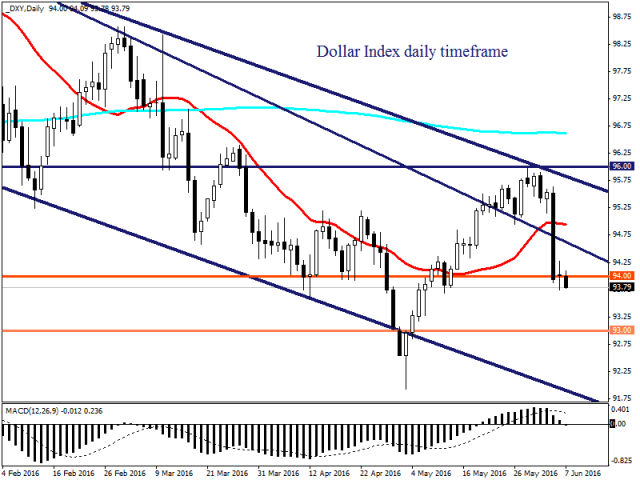 The Sterling appreciated uncontrollably, almost gasping for air during trading on Tuesday following the latest polls that have displayed a slight lead in the Bremain camp. This poll result was remarkable as yesterday prices were sent plummeting after The Daily Telegraph released a survey showing 69% of people intend to vote for the Brexit. It seems likely that the excessive levels of volatility from the intensifying Brexit debates and uncontrollable changes in the poll may leave the Sterling sensitive moving forward. Since the start of the year concerns have skyrocketed over the immeasurable impacts of a Brexit to the global economy while major financial institutions have repeatedly voice their fears. While it remains uncertain which camp will actually claim victory, it is certain that the anxiety may continue to haunt investor attraction towards the Sterling.

From a technical standpoint, the GBPUSD trades in a wide range with a tough resistance based at 1.4700. Bulls or Bears could take control at any moment with the rapidly changing polls installing both camps with inspiration. 1.4500 remains pivotal and could act as a support or resistance. 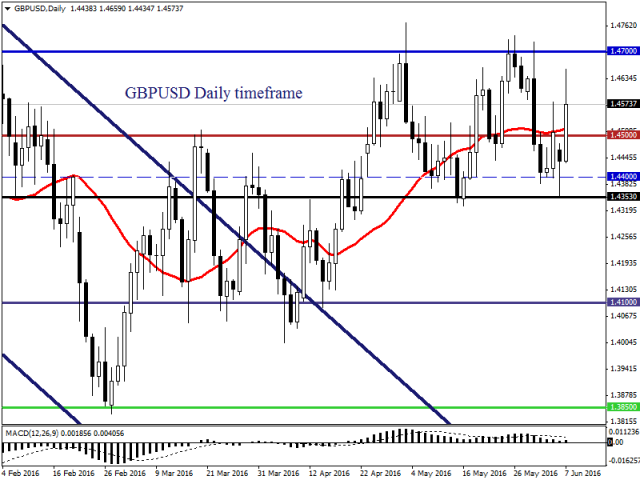 Global stocks traded higher during trading on Tuesday as the positive combination of Dollar vulnerability, rising oil prices and upbeat comments from Janet Yellen renewed investor risk appetite. Asian markets closed in the green territory and the bullish contagion has already installed most European equities with inspiration. There is a strong possibility that Wall Street opens positive with today being a green day across the board as investors digest this feel-good effect from rising oil prices and Dollar weakness. While these gains could be commended, attention should be paid towards not only oil prices but the building tension ahead of the E.U referendum vote on the 23rd of June. If oil prices start to decline amid the oversupply woes and the UK leaves the European Union, then global stocks could be left vulnerable as risk aversion encourages investors to scatter away from riskier assets.