Volatility set to rise ahead of FOMC rate decision next week 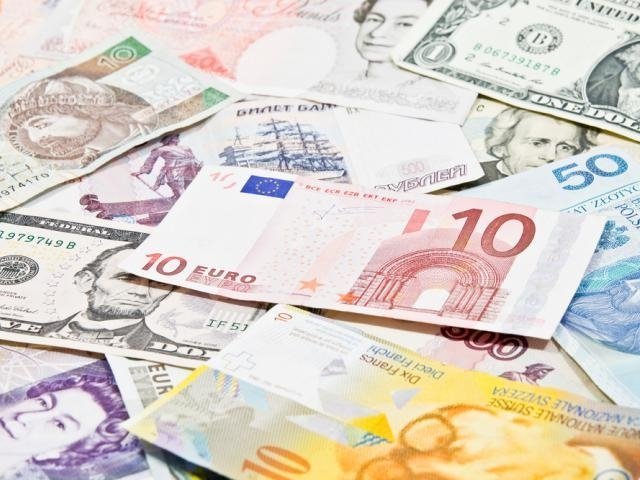 Big volatility is expected next week as FOMC rate decision looms. We review the technical outlook for the major forex pairs ahead of key risk events scheduled for the second part of June.

Beginning with the commodity currencies:

The Australian Dollar traded lower after sellers managed to reverse prices lower from 0.7500 psychological barrier, which coincide with the 50% retracement of the entire drop seen from 0.7835 peak coupled with a former daily support that turned resistance for the time being.

As of now, we believe that the turned has become bearish in the near-term and as far as 0.7450 peak is in place, the pair is likely to fall further in the direction 0.7360/30 support zone.

Therefore, we believe that a bullish corrective wave has ended in the pair and another leg lower should be seen in the near-term. 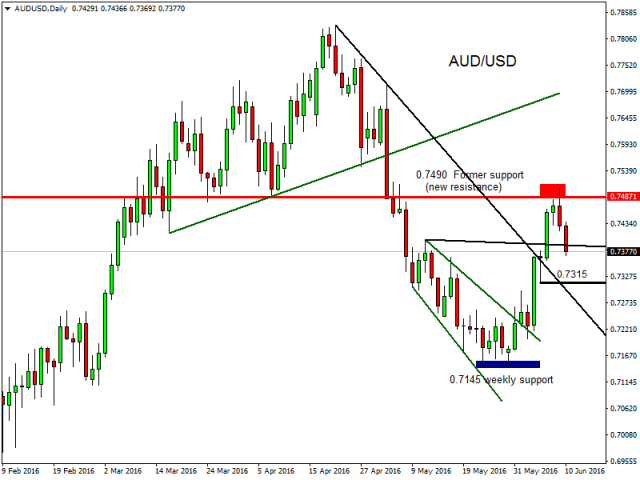 USD/CAD resumed its recovery as commodity currencies suffered from massive profit taking ahead of the weekend.

Therefore, we expect the recovery to continue in the coming days towards 1.2800-1.2820 resistance zone before to see sellers again.

In the flipside, 1.2720 represents the hourly support and prices may remain steady above this level in the short-term. 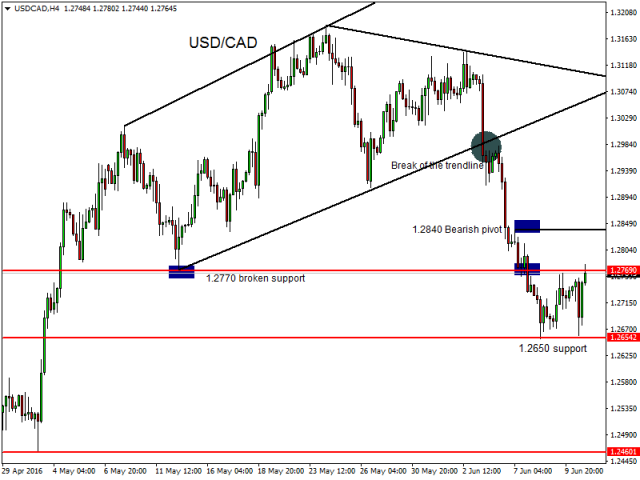 After a big rally, the Kiwi retreated from the weekly resistance of 0.7150 level, which sent the pair into a short-term correction.

Technically, the pair remain positive and should continue to trade higher in the direction of 0.7230 area. Actually, the focus is on 0.7050 former resistance, which is likely to act as a strong support in the next days.

Therefore, we maintain the bullish outlook in this pair and only a daily close below 0.6950 support will weaken this view. 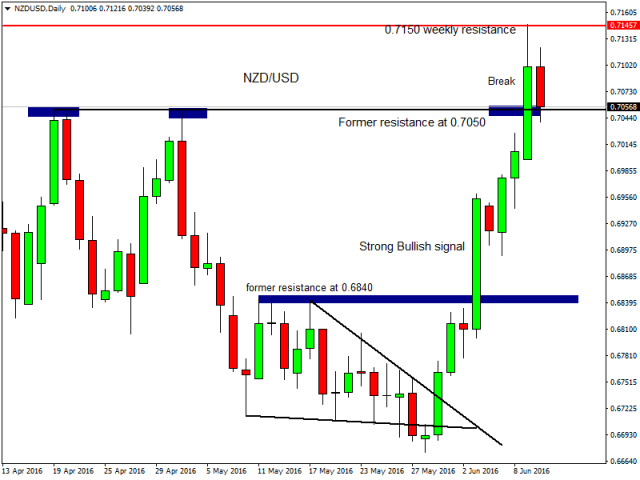 Gold jumped after breaking above 1264-1268 resistance zone, which cleared the way for the daily resistance, which stands at 1277$ per ounce.

Therefore, we expect gold to keep trading higher for the rest of the month, meanwhile, a correction lower is likely in the beginning of the week ahead as prices are testing a strong support around 1277/1280 area. 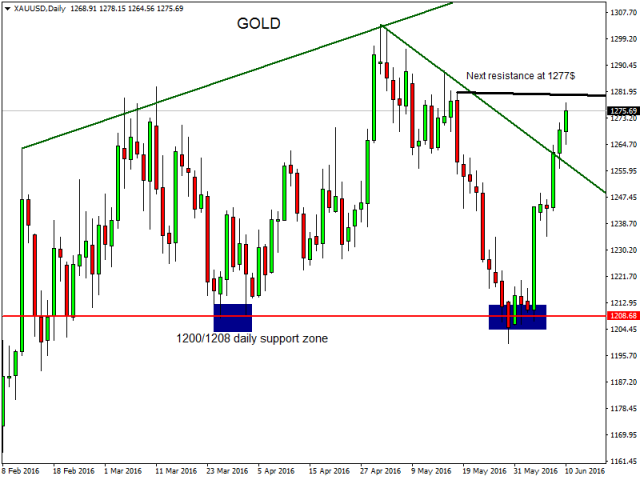 The Euro fell sharply from the 61.8% Fibonacci retracement of the recent drop seen from 1.1610 peak as mentioned in our previous report.

This level stands at 1.1420 and was located near the weekly resistance of 1.1450, which reinforced the probability of a negative reaction around this zone.

Looking at the technical picture, the trend remains positive in the daily chart as far as 1.1135 low is in place, while in the hourly chart the pair turned bearish and may see further losses towards 1.1240/20 zone before to see some demand.

In addition, the single currency should remain under pressure below 1.1320 peak. 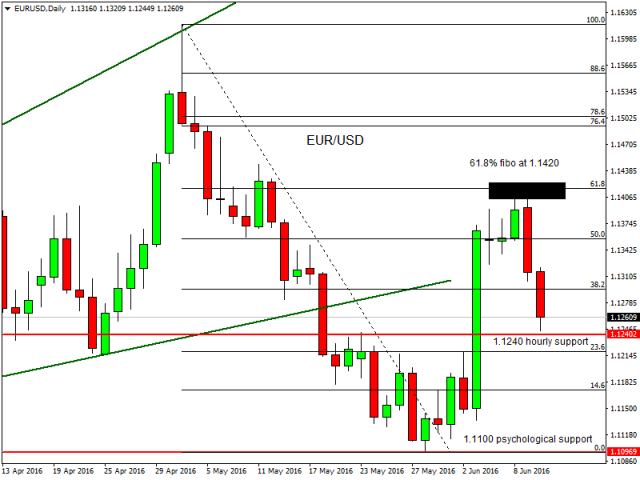 The Sterling plunged on Friday after independent poll showed that the Brexit ‘leave’ campaign reached 55% of potential voters.

However, traders should be aware that the pair has already reached the 61.8% retracement of the entire recovery from 1.3835 low, and we may see strong buyers appearing in the next few days. This level stands at 1.4190 level and only a daily close below it may clear the path for further decline in the direction of 1.4085-1.4000 monthly support zone.

In the other hand, 1.4360 should continue to play a strong barrier in this pair. 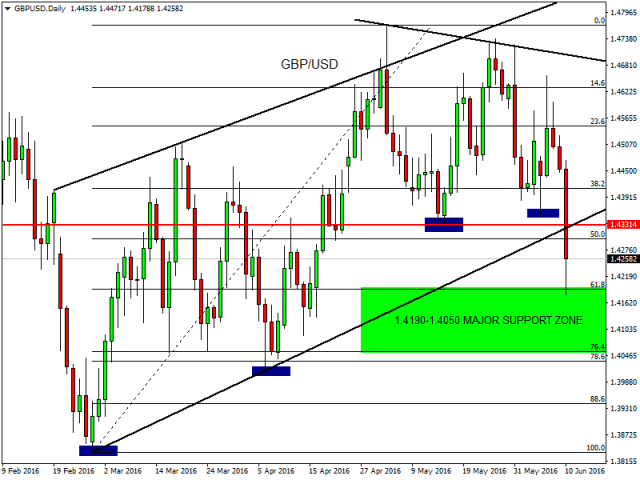 The pair resumed the decline as bearish momentum increased significantly ahead of the FOMC meeting minutes due next Wednesday.

Technically, prices keep fighting to break below 106.30 daily support and looking at oscillators indicators, we believe that a breakdown is likely in the coming days, which may send prices to as low as 105.50 zone.

Finally, the trend remain bearish in this pair and as far as 107.30 peak is in place, further weakness is expected in this pair. 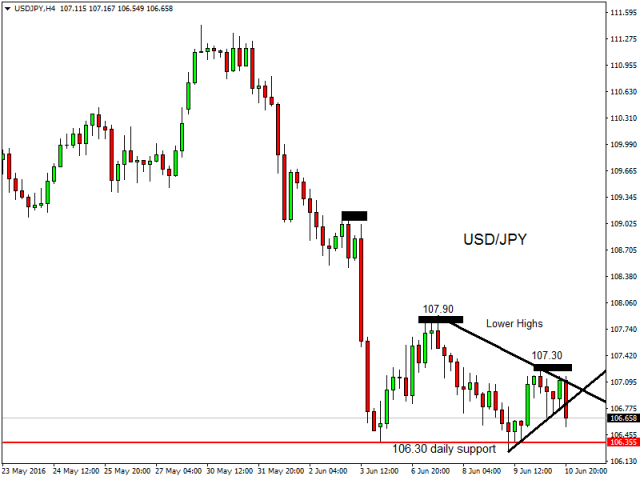