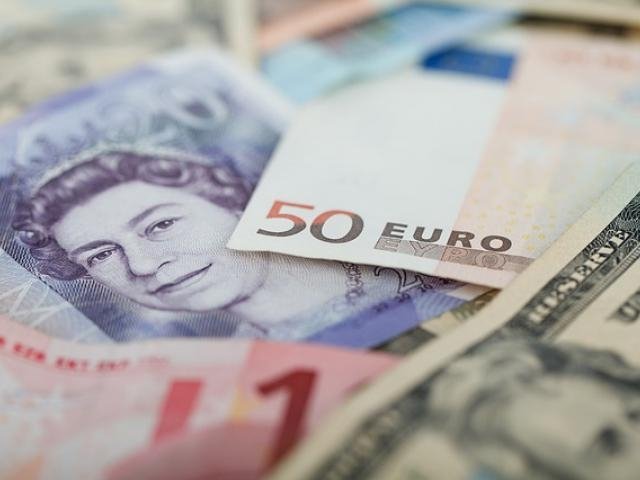 The Euro keep fighting near the daily resistance zone located between 1.1105 and 1.1135 levels and for the time being, the trend remain neutral in the hourly chart. However, the daily chart is bearish and therefore the upside potential is likely to remain limited below 1.1190 peak.

Finally, 1.1090 is the next level of interest for bulls as it represents the short-term barrier for the Euro and as far as this level holds, the single currency is likely to remain under pressure. 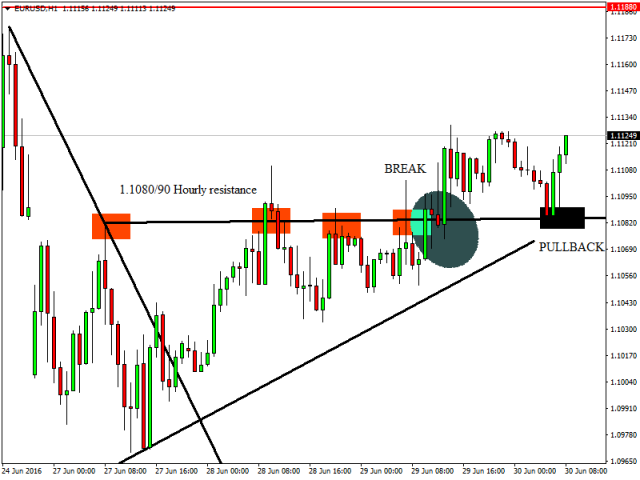 The Sterling rallied towards the daily resistance zone located between 1.3550-1.3650 zone and by now, heavy selling pressure may resume.

From a technical standpoint, another dip is likely in the coming days that can extends to as low as 1.3045 level but for this scenario to be valid, prices should continue to trade below 1.3780 peak. Otherwise, a larger correction may begin in the pair.

To summarize, the pair remain bearish on a med-term basis as far as 1.3780 peak is in place, consequently, the recent rally is considered as corrective only. 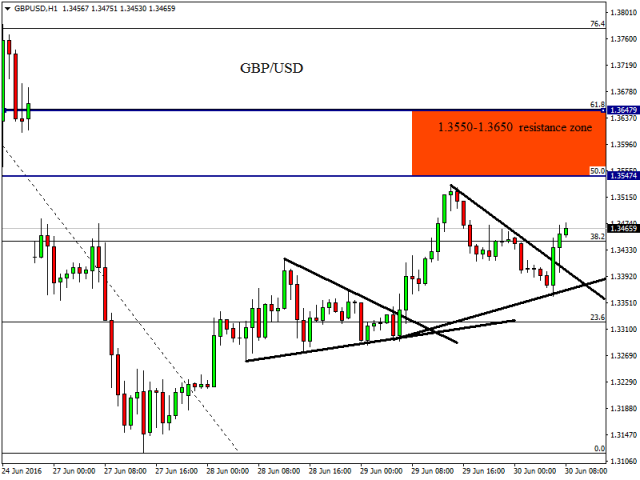 Gold rally faded as bears managed to push prices lower from the 76.4% Fibonacci retracement of the bullish cycle that comes from 1305low to 1335 peak, this level stands at $1327 per ounce and as far as prices keep trading below it, another wave lower in the direction of 1307 support is likely in the coming hours.

As a reminder, traders should be aware that the yellow metal has reached a strong monthly resistance at $1360 and therefore, a deep correction remain possible before the bullish trend resume.

In the daily chart, the trend remain bullish, as we have seen a weekly close above 1307 resistance, however a daily close below this level may extend the current correction to as low as $1292 per ounce in the near-term. 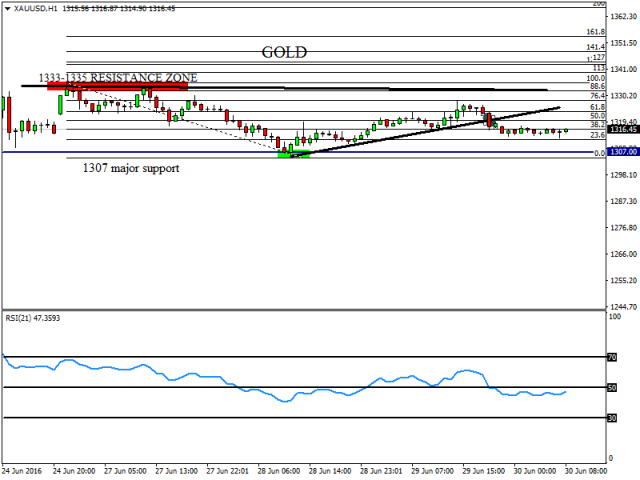 The pair jumped towards the 50% of the recent drop seen from 0.7645 peak, and prices turned sharply lower to test the hourly support level of 0.7375.

As of today, we will focus on 0.7475 resistance, as a break above it will confirm another extension higher in the direction of 0.7500/15 zone. In the other side, only a breakdown below 0.7375/40 support zone will put the pair under pressure again. 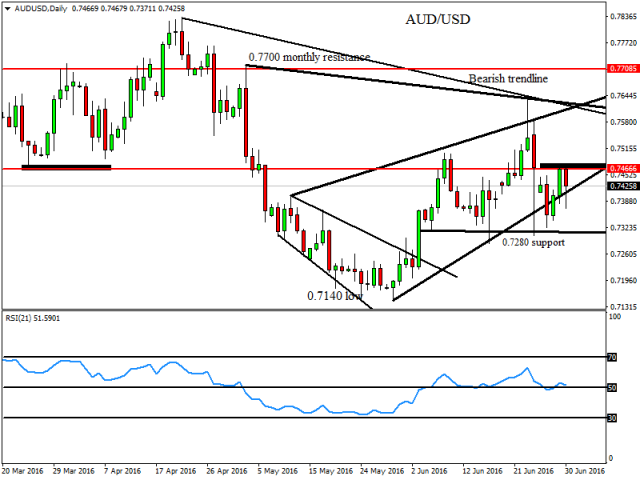 USD/CAD retreated from 1.3100 weekly resistance as mentioned yesterday and looking at the RSI indicator, we can see that the bearish divergence in the hourly chart remain valid as prices managed to break below 1.2960 hourly support yesterday.

Looking at the technical levels, the focus should be on yesterday’s low at 1.2928 level and if the momentum continue to weaken, a re-test 1.2895 daily support is likely especially if the Canadian GDP figures beats the estimates.

In the other hand, only a daily close above 1.3042 barrier should confirm a bullish reversal in the pair. 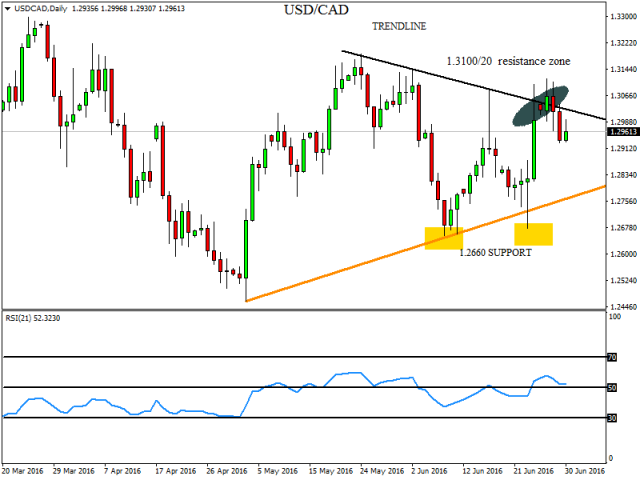 The Kiwi retreated from 1-year high around 0.7300 psychological barrier to end a bullish cycle from 0.6960 low. For the time being, the outlook remain neutral in the near-term while in the daily chart, we can see that prices have bounced from the 61.8% retracement of the last move higher that began from 0.6810 low, which stands at 0.6960 level.

Therefore, we expect a stabilization in prices in the coming hours before another leg higher to begin. In the other side, a break above 0.7150 zone will confirm that the recent corrective wave has ended.

In the near-term, 0.7090 is the key level of bulls and a sustainable break above it will shift the trend from neutral to bullish. 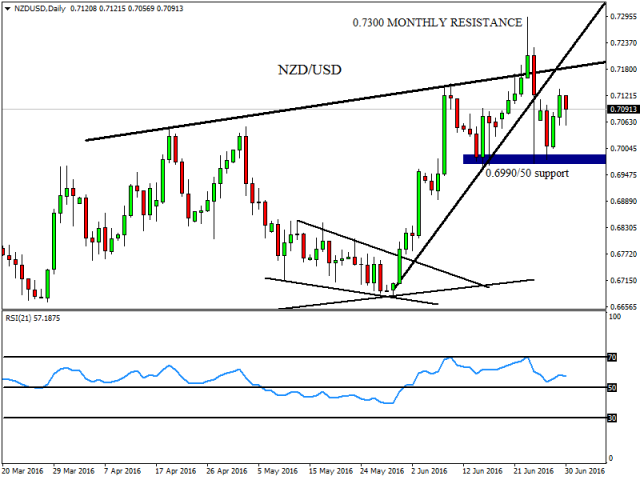 The U.S Dollar failed to overtake 96.00/96.40 daily resistance zone and dropped during yesterday’s U.S trading session, which keeps the med-term view bearish in the Greenback.

Technically, and referring to the weekly chart, the U.S Dollar is likely to remain under pressure below 98.50 peak, but looking at the recent price action traders should wait for a daily close below 95.00 psychological support to confirm another extension to the downside. As of now, the index is neutral in the hourly chart and it is preferable to wait for either a clear break above 96.40 resistance or 95.00 support to confirm the next directional move. 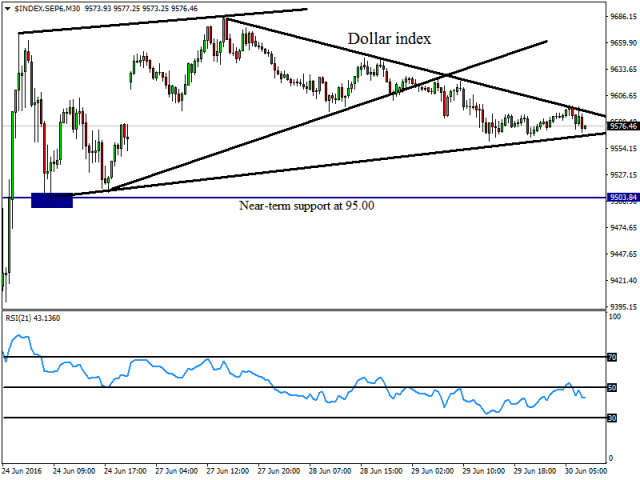