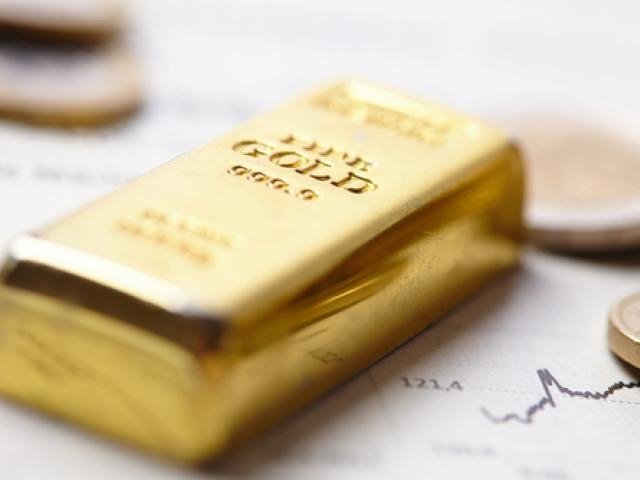 Gold collapsed like a house of cards during Monday’s trading session, with prices dipping below $1275 thanks to a strengthening US Dollar.

The violent price action witnessed in recent days, continues to highlight the intensity of the battle between the bulls and bears. Although renewed political uncertainty in Europe is likely to support the flight to safety, it seems Gold investors may be more concerned with the value of the Dollar.

Focusing on today, prices have edged slightly higher towards $1280, ahead of the FOMC meeting minutes scheduled to be released on Wednesday. With markets widely expecting a US interest rate hike in December, investors most likely will closely comb through the minutes for fresh insights into monetary policy beyond 2017.

Since Gold has become heavily concerned with the value of the Dollar, the tone of the meeting minutes could play a leading role in where the metal concludes this week. Gold may find itself under renewed selling pressure if the FOMC minutes are presented with a hawkish touch, while a dovish surprise has the ability to offer the metal a boost.

Taking a look at the technical picture, prices are currently hovering around $1280 as of writing. Sustained weakness below $1280 could encourage a further decline towards $1267. 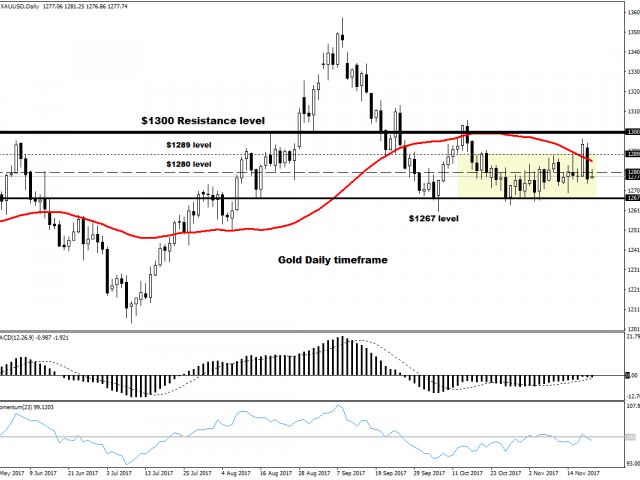 Sterling struggled to gain ground against the Dollar on Tuesday morning, despite renewed hopes over the UK Government putting an end to an extended deadlock with the EU regarding the Brexit bill. Although reports are circulating that the Cabinet’s Exit and Trade sub-committee could approve a further £20 billion, bringing the total to £38 billion, this is still below the £53 billion demanded by Brussels. With Theresa May saying that the UK would “honor our commitments”, it will be interesting to see if this speeds up trade talks.

Investors who were expecting some fireworks from today’s UK inflation report hearings, were left empty-handed after BoE officials chose their words carefully. Most BoE officials reiterated expectations that UK inflation would peak this quarter. With the remarks made in line with what the BoE has already shared with markets, Sterling offered a fairly muted response.

From a technical standpoint, the GBPUSD dipped below 1.3230 before recovering slightly higher towards 1.3250. Price action suggests that bulls may be exhausted, with a breakdown back below 1.3230 encouraging a further decline towards 1.3150. Alternatively, an intraday breakout above 1.3250 should trigger an incline towards 1.3300. 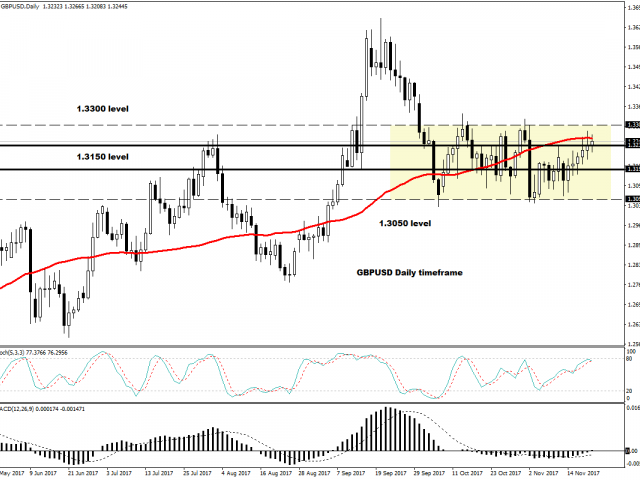 While an extension of the OPEC deal to limit production may inspire oil bulls short-term, the rising U.S output is likely to present headwinds, ultimately limiting upside gains. With markets widely expecting production cuts to be extended when OPEC meets on November 30th, the focus may be directed towards how the cartel deals with Nigeria and Libya - who are currently exempt from the deal.

From a technical standpoint, WTI Crude remains bullish on the daily charts above the $55 higher low. A breakout through $57 may encourage a further incline higher towards $57.80. Alternatively, an intraday breakdown below $55.80 could trigger a selloff back towards $55.00.