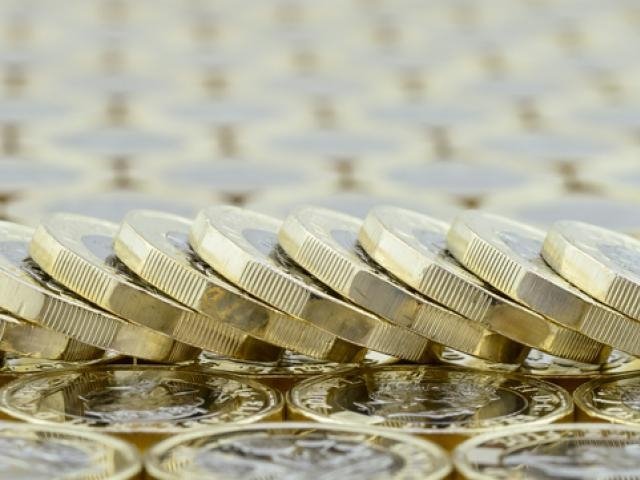 This is certainly shaping up to be a painful trading week for the British Pound, as fears mount over the lack of progress in Brexit talks.

The lingering disappointment from Prime Minister Theresa May’s failure to secure a Brexit deal on Monday, is still reflected in Sterling’s depressed price action today. With the E.U’s Chief Negotiator, Michel Barnier, giving the British government only 48 hours to agree on a potential deal, May is under renewed pressure to solve the deadlock over the Irish border. Although some remain cautiously optimistic of May securing a deal with the DUP, Sterling is still at risk of depreciating further, if Britain is unable to achieve a potential agreement by Friday. An unfavourable situation where Brexit talks are delayed until 2018, is likely to translate to further pain for the already vulnerable British Pound.

From a technical standpoint, the GBPUSD is struggling to keep afloat on the daily charts, with prices trading towards 1.3360 as of writing. Although prices are trading above the daily 50 Simple Moving Average, the bullish daily channel is at risk of becoming invalidated below 1.3340. Sustained weakness below the 1.3400 minor resistance level is likely to encourage a further decline towards 1.3350 and 1.3300, respectively. 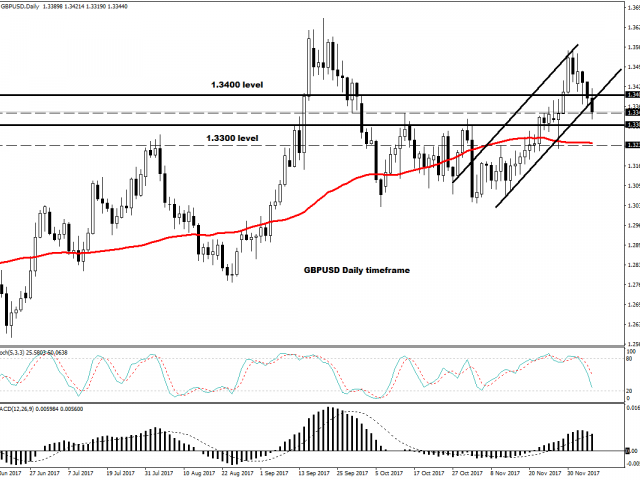 Global stocks edge higher, but for how long?

Interestingly, Asian equities closed mixed today while European stocks ventured higher as investors redirected their focus on the U.S tax reforms and Brexit developments. With European markets back in the green territory, the positive momentum could trickle down into Wall Street later this afternoon. While stock markets could edge higher as investor sentiment improves, the upside may face some headwinds if participants adopt a cautious approach ahead of Friday’s NFP report.

The Greenback appreciated against a basket of major currencies on Thursday, thanks to a renewed sense of optimism on U.S tax reforms.

With the  U.S Senate Republicans agreeing to a discussion with the House of Representatives on a major tax reform bill, some investor anxiety over potential obstacles and complications has dissipated. The growing optimism over lawmakers potentially agreeing on a final bill before the 22 December deadline, could continue supporting the Dollar.

Taking a look at the technical picture, the breakout above 93.50 on the Dollar Index could encourage an appreciation towards 93.80 and 94.00, respectively.

Gold found itself under intense selling pressure during Thursday’s trading session, amid a strengthening U.S Dollar.

The yellow metal has tumbled to its lowest level in four months at $1255 and may be in store for more punishment, thanks to rising optimism over U.S tax reforms. Bears are currently in the building with further downside on the cards if Friday’s NFP report exceeds market estimations. From a technical standpoint, Gold turned bearish on the daily charts after prices secured a daily close below $1267. Previous support at $1267 could transform into a dynamic resistance, that encourages a decline towards $1250. 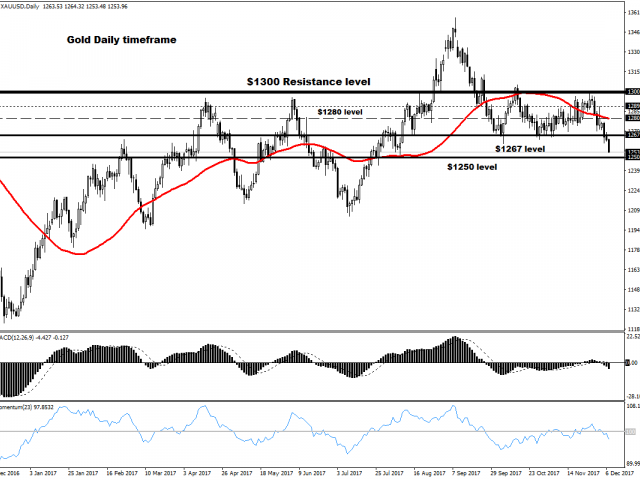