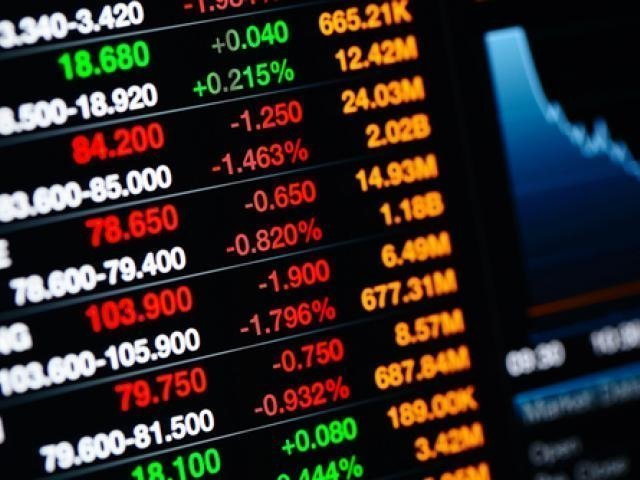 Easter Monday is normally characterised by light trading, but today was anything but out the ordinary, as the US equity markets swung lower sharply on the back of the announcements of tariffs from China on the US. This is quite serious as the 200 day moving average has been broken, and this held back bearish movements previously. With the last line of defence now gone, it could be a case of the bears looking to push their control. This in theory has not been helped by President Trumps attacks on Amazon which have sent tech stocks down as he looks for a target. If the market sentiment is anything to go by then I would be deeply concerned for the bulls, as many have long thought of the share market being overbought, and this could be the start of some serious bearish pressure. 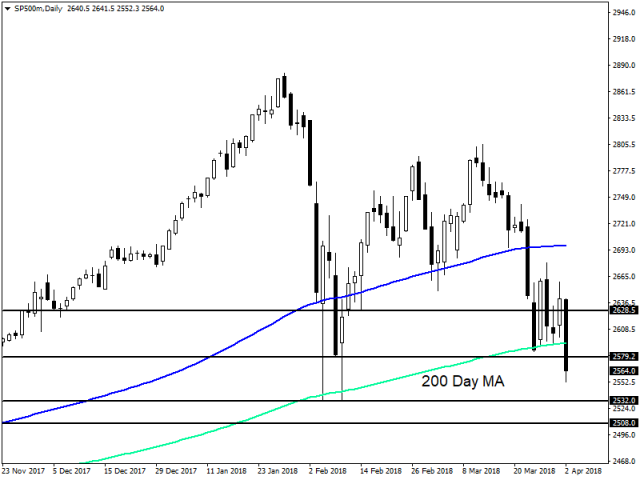 With the 200 day moving average being broken I would expect to see some bullish pressure to see what the market is made of. In this instance I believe any push-back up higher would likely treat the 200 day moving average as dynamic resistance in this instance. The target now for any bears looking for lower lows will be of course the 2532 resistance level, closely followed up by the 2508 level. This area will be the key to see if the S&P 500 has the legs to go even lower, and the bulls and bears will battle it out around here. In the event the bulls cane reassert control, then as mentioned before the 200 day moving average will be a hard task to beat with such a huge extension lower. All in all market sentiment is bearish now, and it will be hard to beat. But it's also worth noting that this is no 2008 scenario, the American economy is still doing strong and it's mainly politics which is driving the lower lows. In reality we could just end up with the market correction we've anticipated for some time.

Crude oil has been one of the big movers today as well, but this should come as no surprise after the recent economic woes on equity markets have spooked bulls, and as the USD lifted strongly against most of the major pairs. Many market commentators have been quick to point that over $70.00 a barrel seems unlikely as demand stays static and they expect a range of 50-70 dollars in the short to medium term. Then again time and time again we've seen commentators be wrong and oil can swing quite wildly. 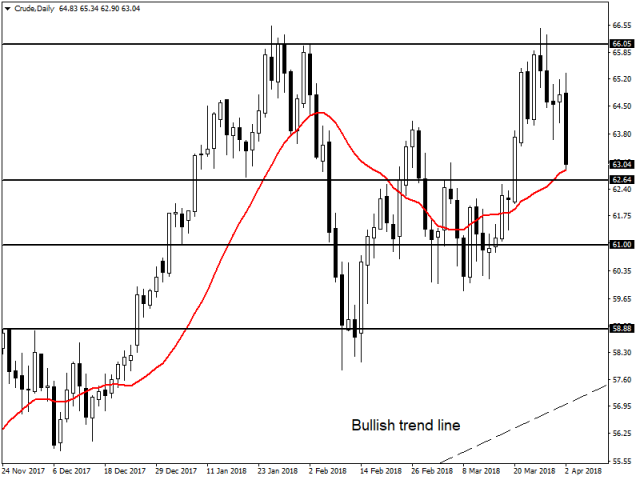 On the charts the fall lower has so far been stopped by the 20 day moving average. This shows reluctance from the bears to test the technical's, so this looks more like a test the waters sort of move today. However, the ceiling at 66.05 has held for some time and is not looking like it may face much pressure. As a result this could just be trending sideways for the short term and levels will be key for traders looking to take profits. In particular support levels at 62.64, 61.00 and 58.88. With the long term daily bullish trend line to also take into consideration.