Yen and Lira fight back against USD

FOMC minutes were released not too long ago and they reveal that the June rate hike is very likely to happen after FED members were positive about the state of the economy and the recent rise in inflation. It also showed that if inflation did increase beyond forecasts they FED would likely let it run instead of risking bumping rates to soon and causing a pinch effect in the economy if it tapered off; as a result the USD is a little weaker as many had expected the FED to be more hawkish, rather than let inflation run in this instance. The FED also noted the recent risks, with China and NAFTA being threats to the US economy and progress overall for the expansion of the economy. However, there is little the FED can do but try and negotiate the turbulent waters that come with politics and trade agreements.

One of the big movers on the back of the USD weakness has been of course the USDJPY, which moved quite heavily as a result of bad economic data (US home sales) and of course the dovish response from the FED in regards to inflation. 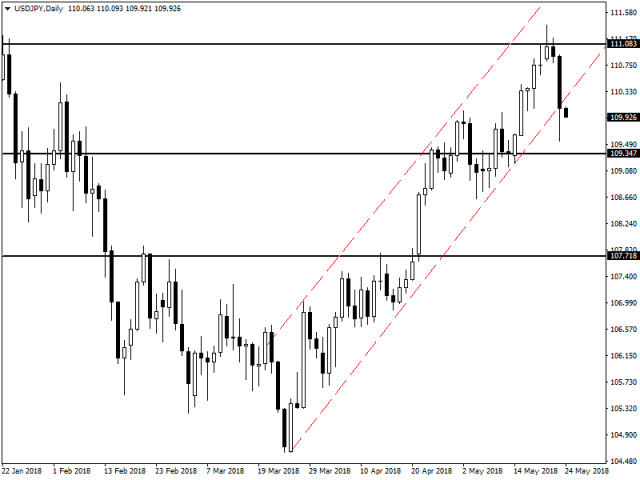 The USDJPY had been moving in a tight channel up the charts as the USD appreciation and positive risk sentiment saw traders looking to exit the USDJPY. However, after today's movements that channel has now been broken and even a bullish fight back was unable to contain the bears as they looked to swipe a little lower. Traders may be looking now to target key support at 109.347 and with further potential falls to 107.718 on the cards as well, but it's also worth noting that the USDJPY does not break levels easily and can just as easily move sideways until it finds direction. In the event this is just a pause I would look for markets to have another crack at resistance at 111.083. The long term for the USDJPY does look to be bullish, but the positive risk climate must continue to enable it to do so, and there will inevitably be days where these sort of movements happen.

The other back mover made reference to by my colleagues has been of course the Turkish Lira which has come under immense pressure over the last few days, as a strengthening USD and economic/political factors have undermined the currency heavily - much like the Russia crisis a few years ago. 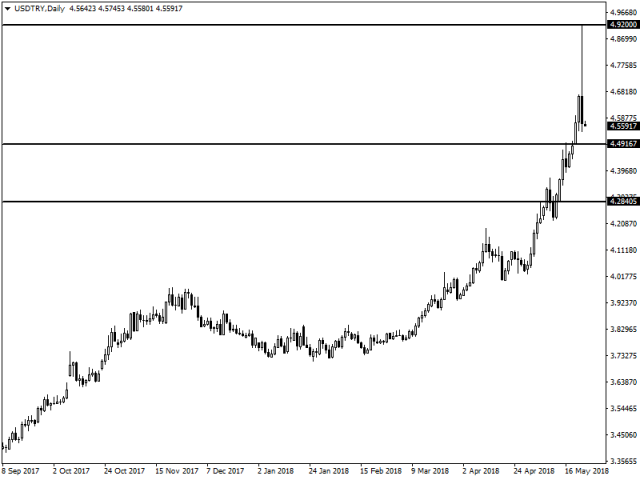 The Turkish Central Bank has taken the extraordinary step to intervene without any formal meeting, lifting interest rates by 3% in the wake of all the aggression. This has had a positive effect when it comes to stopping the bleeding for the currency, as it touched on resistance at 4.9200 but has since fallen back sharply since the rate rise. Markets will now be looking for potential support levels, but it's hard to tell where they start and stop with possible areas being at 4.4916 and 4.2840, if the bears continue to fight back.