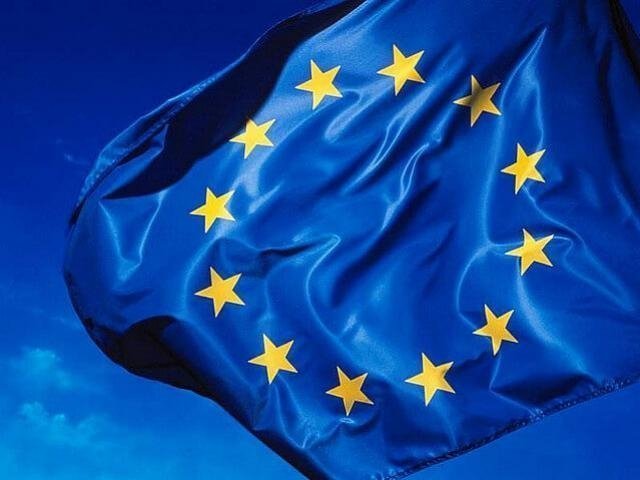 Italy looks to be putting more pressure on the Euro as the current president of Italy Sergio Mattarella has rejected the nomination for the economic minster of the country based on his views of leaving the Euro all together. As a result of this all the two major parties who had formed a coalition are already in campaign mode and more driven than ever before to form a government and get there way. Many are now saying that this election in reality could be a referendum for Italy about the Euro and if it does indeed decide to stay in the Euro all together. Markets are obviously not excited about such a prospect and bond yields for Italy 10 year notes have jumped, and the equity markets have come under serious selling pressure. 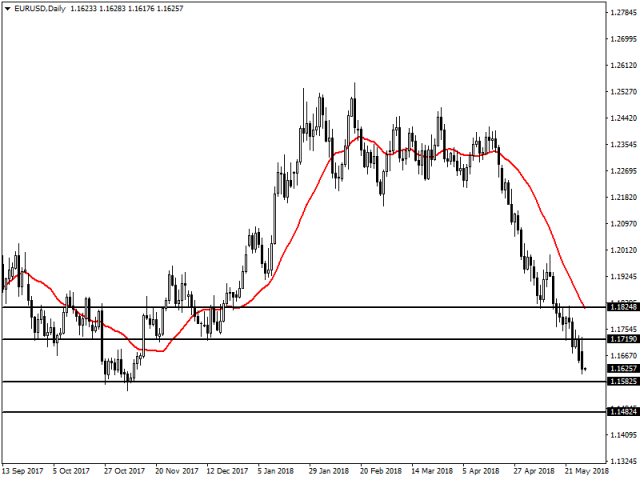 Looking at the Euro it's clear to see that it's moving with the politics of the day and not paying too much attention to much else, as Italy is the third largest economy in the euro-zone. Markets were bullish until it looked like elections were to be called and resistance at 1.1719 stopped all hope of any further climbs higher. With the bears looking to swipe on this uncertainty there is real scope for further pressure at 1.1582 and 1.1482 on the charts, and it's very likely that markets will be relentless with the Italy question being the big question that markets will be watching and trading on heavily.

Oil has been one of the big movers this time around, as it has slipped sharply down the charts on the back of a strong USD, but also concerns that oversupply could be a factor as Saudi Arabia and Russia have agreed on Friday to start ramping up production again as the market has improved. This has obviously sent oil tumbling, however they feel now is the time to act in the current market and as oil has previously lifted above that 70 dollar a barrel mark. 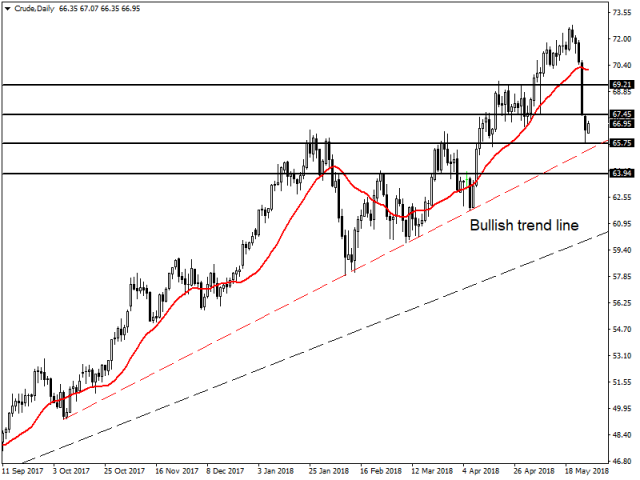 Looking at oil on the chart is quite interesting as you have two long term trend lines in play. The first one being in the red is the one that markets are playing off at present and likely to be strong in the coming weeks. The black line below this is the bullish run from where it started so if we see a slip through of the first red line then expect bears to shy away from taking it further at the black bullish trend line. So far the bounce of support around 65.75 has been respected from the bears and they've certainly eased of the pressure as a result with oil looking like it may reverse some losses. Resistance levels can be found accordingly at 67.45 and 69.21 with the potential to carry higher if markets perceive the upcoming increase in production to be negligible. Below support at 65.75 the market has solid support at 63.94 with the potential to go lower than this to the trend line if the bears are able to really take control of things.