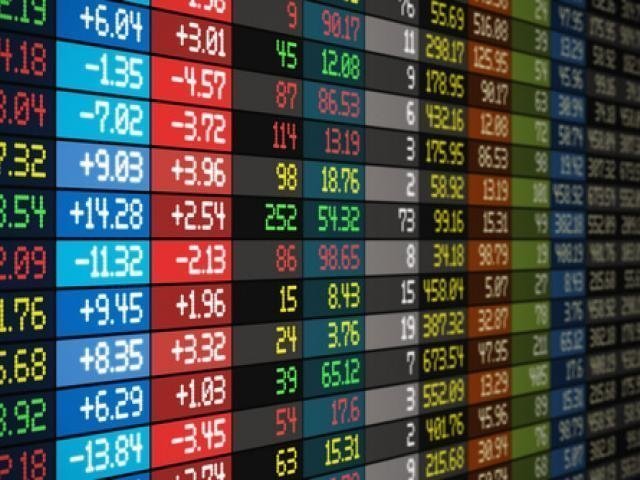 The USD faltered slightly today, but not against other American currencies as it surged yet again against the CAD to extend for the 4th day in a row. US data today was a mixed bag with US building permits slightly down to 1.3M (1.5M exp), while US housing starts lifted to 1.35M (1.31M exp) which is a good sign in the lead up to summer. However, the major focus thus far has been on the trade threats Trump is making against China after they looked to impose tariffs as well on the US markets in retaliation. The main loser in such a scenario is likely to be the US consumer in the long run as costs are passed a long, and it could in theory dampen consumer spending over all. Most economists now believe though that nothing will spiral out of control as some have predicted, as Trump has shown he is capable of reversing decisions just as quickly if he feels like he has made some ground. For now though the USD may have moments of panic, but against its neighbours like the CAD it is making some serious ground. 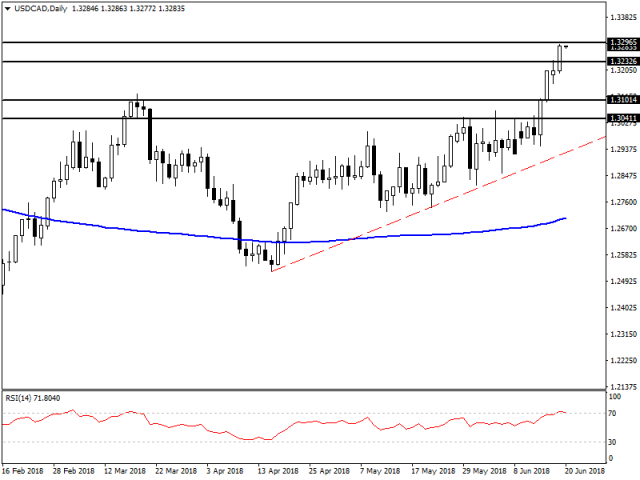 A quick look at the USDCAD on the charts shows how quickly it has broken ground over the last few days, as it freed itself from the bullish trend line and has just stopped short of resistance at 1.3296. With such large bullish moves the USDCAD is starting to look a little oversold as it pushes over the 70 mark on the RSI. Previous touches on the daily chart in the past few months have lead in part to sell-offs so it should be something to be aware of. In the event that the USDCAD does come under pressure from traders exiting then support can be found at 1.3232 and 1.3101 in this instance. With the long term bullish trend line also worth paying attention to as well.

Previously mentioned yesterday was of course the AUD and the Reserve Bank of Australia (RBA) monetary policy minutes. Yesterdays minutes were anything but hawkish with the RBA looking very uncertain about the prospect of a rate rise in the near future. This is in part to the fact the labour market is not looking as strong as expected and inflation is still looking a little subdued. However, the weakness in the AUD will obviously pay off in the long run when it comes to boosting inflation and helping drive job growth - if it holds. 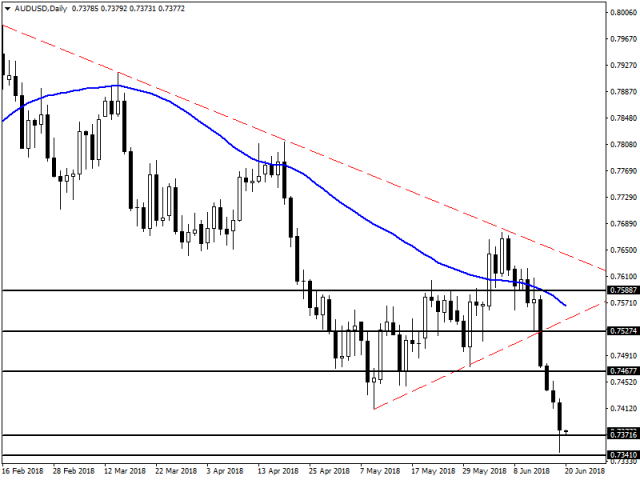 The AUDUSD has moved down the charts and is looking weaker as a result, but it managed to claw back some ground against the USD after almost touching resistance at 0.7341. The AUDUSD is now resting just above resistance at 0.7371 and potentially could have another crack if the upcoming NZD data is weaker as well, as it has the potential to drag the AUD down with it. All in all, bearish sentiment still remains here and the commodity currencies are going to have a hard time in the future until interest rates start moving.