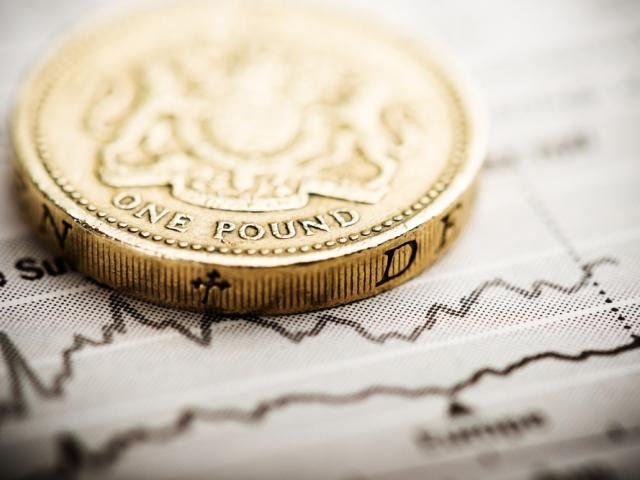 Today’s main risk event for the British Pound will be the UK services PMI figures for June which could offer some insight into the health of the UK economy.

Growth in the UK services is projected to remain unchanged at 54.00 in June. While a figure that meets or exceeds market expectations may support the Pound in the near term, gains remain threatened by Brexit related uncertainty.

Appetite towards the Pound is likely to diminish as anxiety heightens ahead the looming UK cabinet meeting on Friday. Theresa May is expected to present a “third way” post-Brexit custom proposal in an effort to break the deadlock within her cabinet and the EU. Sterling could witness heavy losses if Theresa May’s proposal is met with rejections.

Will the Bank of England raise UK interest rates in August? This is a question that remains on the mind of many investors. While last week’s upward revision to first-quarter GDP growth and positive PMI figures for June may support expectations of a rate hike, Brexit uncertainty, and global trade tensions could force the BoE to delay monetary policy normalization.

In regards to the technical picture, the GBPUSD remains bearish on the daily charts. There have been consistently lower lows and lower highs while the MACD trades to the downside. Daily bears remain in firm control below the 1.3290 lower high. An intraday breakdown below 1.3186 could trigger a decline towards Tuesday’s low at 1.3114. Alternatively, a bullish move above 1.3230 may signal an incline towards 1.3290. 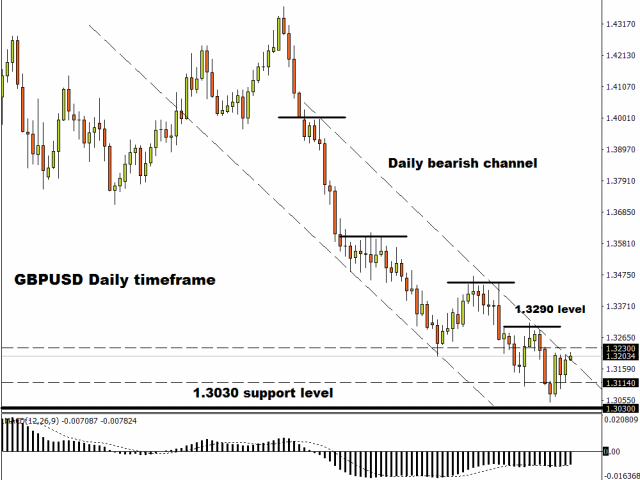 The Dollar could continue weakening against a basket of major currencies as investor’s profit-take ahead of Thursday’s FOMC meeting minutes.

Investors are likely to closely scrutinize the FOMC meeting minutes for clues on rate hike timings during the second half of 2018. With unemployment in the United States falling to an 18 year low and inflation hitting the golden 2% target, speculations remain elevated over the Fed raising rates at least two times this year. However, an appreciating Dollar and global trade tensions could dampen expectations over the Fed adopting a more aggressive approach towards monetary policy normalization. The Dollar could receive a welcome boost if the FOMC meeting minutes are more hawkish than expected.

Focusing on the technical picture, the Dollar Index could be experiencing a technical correction on the daily charts. A breakdown below the 94.30 level may trigger a decline towards 94.00 and 93.85, respectively. If bulls are able to awake from their temporary slumber, the Dollar Index has scope to venture towards 95.00 and 95.40.

Gold bulls have found support in the form of a weakening Dollar this morning with prices rebounding towards a fresh weekly high at $1260.

While the yellow metal has scope to appreciate further amid a softening Dollar, the outlook remains bearish in the medium to longer term. With the Dollar likely to recover on prospects of higher US interest rates this year, zero-yielding could receive a double blow.

Much attention will be directed towards the US jobs report on Friday which could play a key role in where Gold concludes this week. A strong NFP figure coupled with signs of accelerating wage growth may boost speculation of higher US interest rates – ultimately punishing Gold.

In regards to the technical picture, Gold remains bearish on the daily charts. A technical rebound is in the process with prices trading above the 23.6% Fibonacci retracement level of $1254. An intraday breakout above $1260 could encourage a further incline higher towards $1264.43. Alternatively, a failure for bulls to keep above $1251 could open a path back towards $1245. 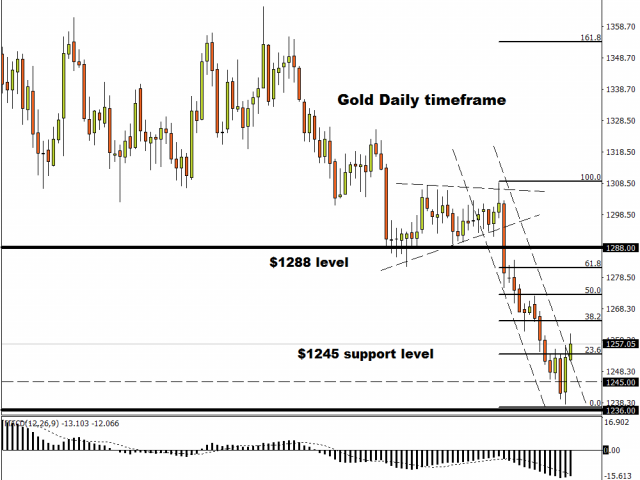